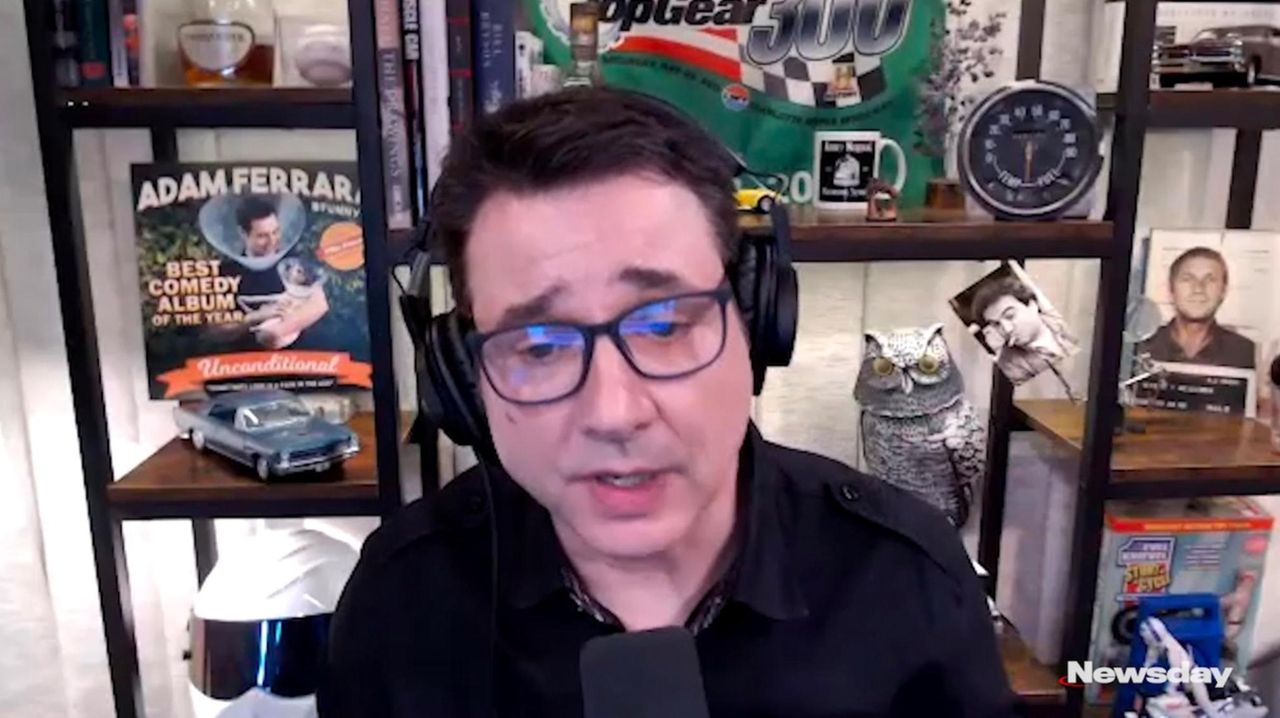 Newsday reporter David J. Criblez interviewed comedian Adam Ferrara, who grew up in Huntington, and talked about the Golden Age of Comedy on LI Credit: Newsday

Long Island loves to laugh. Stand-up has always been a strong draw in both Nassau and Suffolk. The comedy culture began in the late ‘70s and early ‘80s when clubs like East Side Comedy in Huntington, Governor’s in Levittown, Chuckles in Mineola and the Brokerage in Bellmore ruled the day.

"We used to say, ‘Comedy is the disco of the ‘80s,’ " says Jeff Sussman, current manager of comedians Kevin James and Joe Rogan and former booker of the East Side Comedy Club. "On Saturdays, we’d do three shows 7 p.m., 9:30 p.m. and 12:30 a.m. People would be lining up outside in the winter to get in because it was first-come, first-served for seating. The shows would sell out a week in advance within a couple of hours."

Although stand-up comedy was not a new art form, it was evolving and becoming more in tune with suburbia.

"There was a new style of comedy that went beyond the Catskills one-liner jokes," says comedian Peter Bales, 66, of Northport. "Our comedy was more conversational and thought-provoking. We were following in the footsteps of Robert Klein and George Carlin."

Taking in an evening at a comedy club became a popular date night of the era.

"Normally you’d have to go to the city for this kind of entertainment. Now it was right in your neighborhood," says Sussman. "The shows were packed and we didn’t even need to have big-name headliners on the bill."

Stand-up began on Long Island at Richard M. Dixon’s White House Inn in North Massapequa which held a variety show on Wednesday nights. (The club was run by Dixon, a comedian who bore a strong resemblance to former President Richard M. Nixon.)

"It was very intimate and quaint. The size was so small you almost didn’t need a sound system," says comedian Bob Nelson, 62, of Mt. Sinai, who made his stand-up debut at Dixon’s. "The first night I performed, I massacred the place because my friends were in the audience. But, I didn’t even have an act. I was fooling around with the curtains and candles on the table."

In the late ‘70s, there were no designated comedy clubs on Long Island. However, there would be special comedy nights at various locations.

"We were looking for places to do one-nighters because stand-up comedy was getting kind of hot," says Nelson. "Everybody had a different comedy night at places like Whiskey Red's in Farmingdale or Winner’s Circle in Westbury. Even discos would have a ‘Gong Show’ night and the comics would compete for first place ($50-$100 prize)."

Comedian Jackie "The Joke Man" Martling would perform music at Neptune’s Pub in East Meadow and tell jokes in between songs. He’d even have his comedian buddies like Dave Hawthorne, Richie Minervini, Bob Woods and a teenage Eddie Murphy do guest spots.

"The guys used to come to where I was working because there was no place to do comedy," says Martling, 73, of Bayville. "Then Richie asked the guy at Cinnamon if we could come there one day a week."

Cinnamon, a restaurant/bar, owned by boxer Gerry Cooney’s brother on the corner of Routes 25A and 110 in Huntington, started a Tuesday night comedy show in 1979.

"Cinnamon was packed from the beginning," says Martling. "We had a great sound system. Richie would host and I went on last. Word got around like wildfire."

The success at Cinnamon caused Minervini to invest in opening his own place, the East Side Comedy Club, located on West Jericho Turnpike in Huntington. Opening in November 1979, it became Long Island’s first full-time comedy venue.

East Side became a home base for Long Island comedians, a distinct breed apart from Manhattan-based comics.

"There was a definite distinction between Long Island comics and city comics," says comedian Adam Ferrara, who grew up in Huntington. "City comics were all about set up-punchline-segue-set up-punchline while standing still at the mic in a suit. We were animated storytellers. It was a show."

Comedian Bobby Collins, 69, who grew up in New Hyde Park, adds, "Long Island has a down-to-earth quality. Comics from Long Island give the crowd an insightful look of not only who they are but how they were brought up. People love that."

Even Sunday nights were popular at East Side as Nelson headlined every week featuring his prop-based act filled with a series of diverse characters.

"Bob Nelson was the king of Long Island comedy. He sold out my Sunday nights from 1985-1995," says Minervini. "His string of characters drew a loyal fan base. People would come to see him over and over again."

Another king made his mark at East Side, "The King of Queens" star comedian Kevin James, 55, who grew up in Stony Brook and told Newsday in 2013: "The East Side Comedy Club was the first place I ever went up at. While most club owners would turn me away and it was tough to get stage time, Richie Minervini was completely the opposite. He was the one coaching me to get used to being on stage and he would push me out there. I was like Bambi walking across the ice. But I’d get stronger and stronger with each performance."

Many people cite the special bond among Long Island comedians was based on the camaraderie-over-competition atmosphere.

"I have 30-to-40 year-old relationships with some of these guys. We’ve been in these foxholes together," says comedian Joey Kola, 59, of North Bellmore. "We always had each other’s backs. We would even write for each other by giving tags to each other’s punchlines. You become really good friends that way."

As the time moved on, clubs started popping up all around Long Island such as Governor’s in Levittown, Chuckles in Mineola, Laffs in East Quogue, the Orphanage in Patchogue, McGuire’s in Bohemia, Lighthouse Comedy Plaza in Miller Place, Giggles in Merrick, Konkoma Komedy in Ronkonkoma and The Brokerage in Bellmore.

"Long Islanders know their comedy," says James Dolce, owner of Governor’s Comedy Club. "You can’t fake a Long Island comedy crowd. If you are not professionally honing your material, they see right through it."

However, the scene was a bit of a boys club as there wasn’t much gender diversity. But comedian Joan St. Onge, 63, of Huntington was ready to take on the male dominant cast of characters.

"I grew up with three brothers therefore I had no unrealistic expectations about men so I blended in quite well," says St. Onge. "But if you are funny, that’s all that matters."

Like every high rising wave, then came the crash. By the mid-‘90s, the comedy boom began to wane. East Side closed in 1995.

"Television was saturated with stand-up comedy all over every other cable channel," says St. Onge. "Many people felt, why go to a comedy club when you can just turn on, ‘An Evening at the Improv’?"

But, many comics predict another comedy boom is on the horizon post-pandemic.

"People are desperate to get a laugh these days. They want to hear anything but the news," says Kola. "I have a feeling stand-up is going to come back hard. It’s possible we are going to return to the heyday of the ‘80s when people were filling the clubs on a Monday night."

The first two superstars to launch from the East Side Comedy Club were the youngest. Both Rosie O'Donnell of Commack and Eddie Murphy of Roosevelt came to the club as teenage mavericks.

O’Donnell got laughs both with stand-up and performing in improvisational comedy troupe, The Laughter Company.

“Rosie was very aggressive and audiences loved her,” says East Side owner/comedian Richie Minervini. “She had a really good feel for characterization and could lock into an old person or young person - male or female. It was amazing.”

In addition to stand-up, Murphy was doing skits at East Side with his comedy trio, the Identical Triplets featuring fellow comics Bob Nelson and Rob Bartlett, before hitting it big on “Saturday Night Live.”

“Eddie was destined for greatness,” says Minervini. “Even when he became famous, he would drop by to do a guest set. The crowd would explode. It was the most incredible thing you’ve ever seen. It was like Elvis walked in the room. People couldn’t contain themselves.” - DAVID J. CRIBLEZ