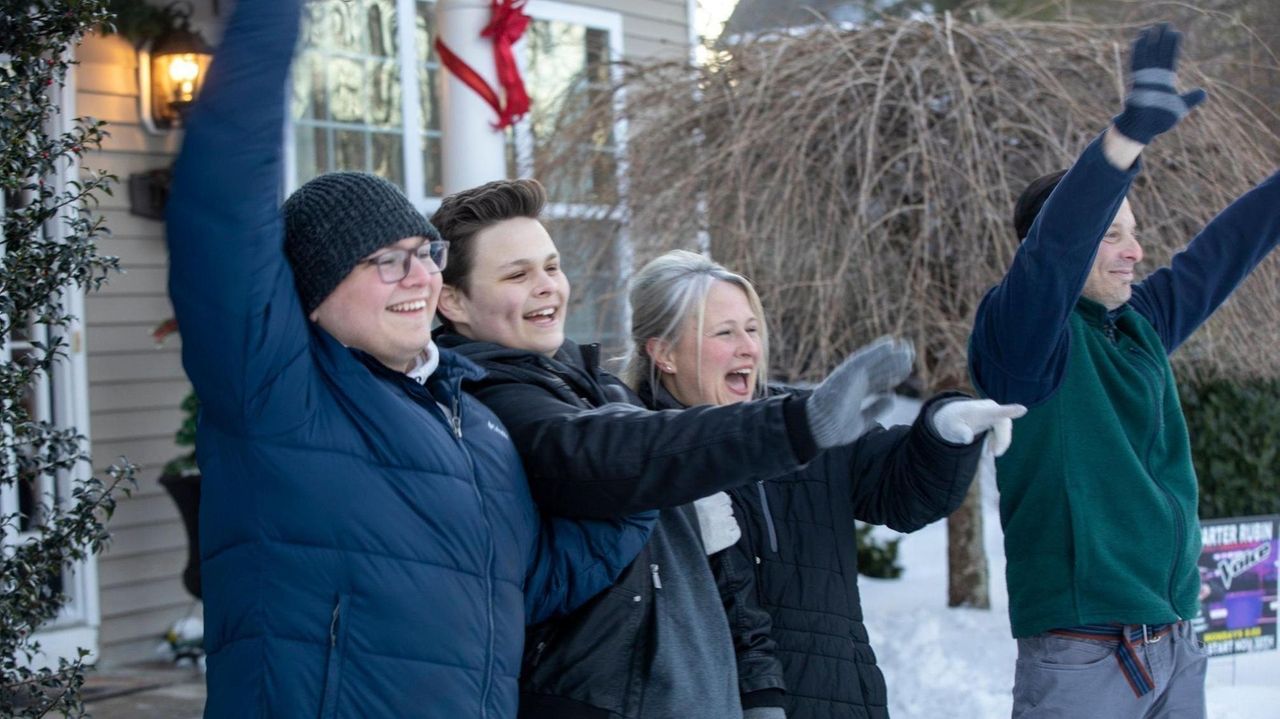 Shoreham teen Carter Rubin, winner of the NBC singing competition "The Voice," was celebrated at his home Friday by family, friends and neighbors with a car parade.   Credit: Howard Schnapp; Kendall Rodriguez

Who says you can't go home again? Certainly not Shoreham teen Carter Rubin, who won the NBC singing competition "The Voice" Tuesday night and was welcomed back Friday with an outpouring of affection and local pride as friends and family members drove by his home and honked their horns to congratulate him.

"I'm very honored. My community has been amazing and so supportive throughout this whole journey," Rubin, 15, told Newsday in a video. "They never failed to vote for me and support me and they're the reason I won. They're awesome."

From wearing "Team Carter" T-shirts to hanging posters of Rubin in shops, his community has been behind him.

And then there was the parade, a collaborative effort by the Shoreham Civic Association, Suffolk County Police Department, Shoreham-Wading River High School administration, and local fire departments and community members. Suffolk County Legis. Sarah Anker also showed up to present Rubin with a proclamation.

That support for community works two ways, as Rubin has demonstrated to his neighbors. "My wife works in a classroom in the school district for special needs kids, and Carter actually called into the Zoom call with all the students, which was impressive since it was the day of his performance when he was supposed to be practicing," said Rich Pluschau of Shoreham. "He took time out of his day and he was really engaged and active with all these special needs kids, many of whom were not very verbal and he was getting them to sing.

"He's just such a beautiful kid, and between him and his family we're all really proud of him."

Rubin's biggest fans remain his family — mom Alonna, dad David and 19-year-old brother Jack — who joined him as the parade passed by. Throughout the celebration, visitors popped up with gifts of balloons, flowers and "Congrats Carter" signs.

Rubin's mom accompanied him to Los Angeles throughout his run on "The Voice."

"I'm proud to call her my mom, because she sacrificed a lot for me to follow my dream," Rubin told Newsday on Wednesday after his victory.

David Rubin joked that his son started singing "the day he was born," with Carter adding that he didn't really begin taking music seriously until he was 7.

"That was when I first performed in front of a live audience, and from there I started gigging all over Long Island at theaters and restaurants," he said. "I discovered that this is what I want to do and this is what makes me happy."