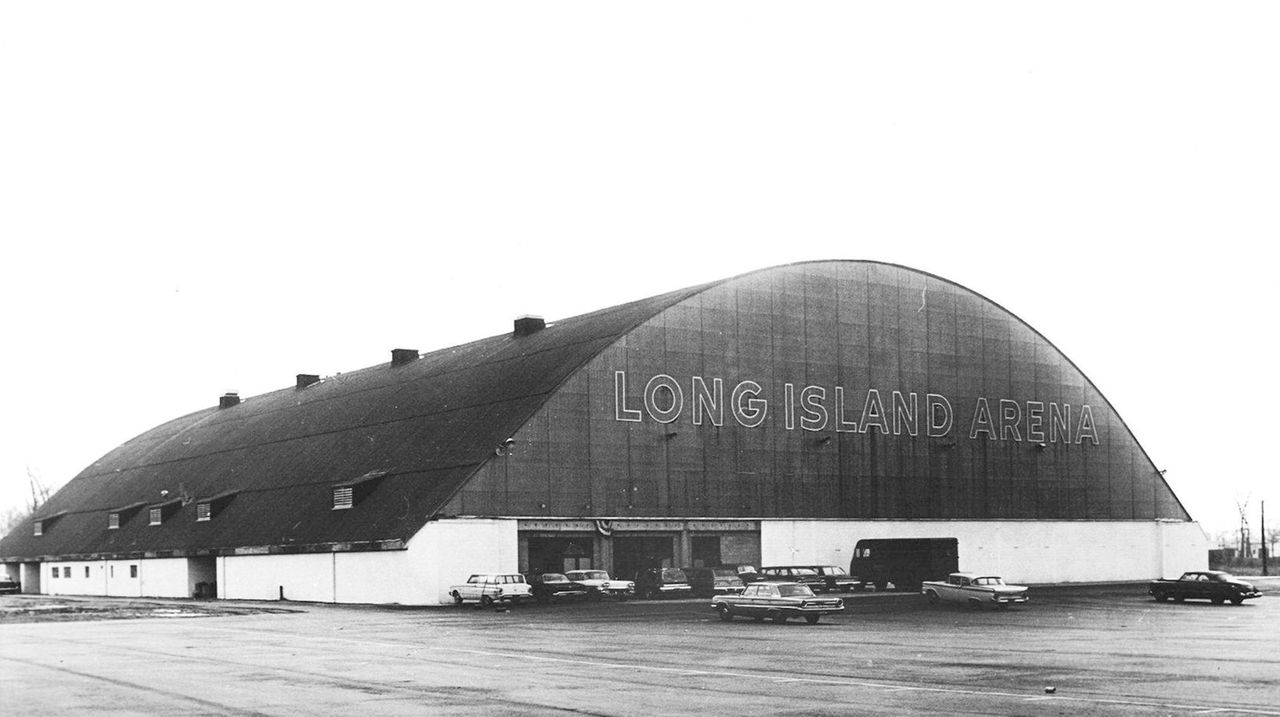 Before there was Nassau Coliseum, there was the Long Island Arena. In 1959, Suffolk County birthed its first arena at 88 Veterans Memorial Highway in Commack. The building was a constant source of entertainment hosting sporting events (hockey, basketball), concerts, political rallies, a flea market and even the circus. But more importantly the building had a personal connection to its attendees who felt a kinship to the 4,000-seat venue, which closed permanently 25 years ago on July 31, 1996.

"When you walked in the place, you felt like there was something special going on," says Paul Blake, 67, of East Meadow. "There was a vibe in the building."

Eric Lowenhar, 54, of Greenlawn adds, "For suburbia, it was incredible. It felt intimate like you were connected to the players or performers. Even if you had a bad seat, it was still pretty good."

The signature arched roof gave the building a unique look but the accommodations inside were rudimentary.

"There wasn’t anything luxurious about it. It was a big barn basically," says Paul Charles, 61, who is originally from Commack but currently lives in Long Beach. "The whole place was made out of wood. You could get splinters from the walls and always feel the cold coming up from the ice."

During the 1960 presidential election, both candidates John F. Kennedy and Richard M. Nixon held rallies at the Long Island Arena along the campaign trail. Nixon appeared on Sept. 28, 1960 while Kennedy came on Nov. 6, 1960 two days before Election Day.

"I remember Kennedy arrived in an open convertible car. The crowd was huge. We had flags that we waved that said ‘JFK/LBJ’ and we were all wearing campaign buttons," says Christina Paino, 68, of Hauppauge, who attended at age 8 with her father Tony Mirro, a committeeman in the Smithtown Democratic Party. "Kennedy spoke from a platform that was built in the stands. We were within two or three rows of it. When he won the presidency it was like, ‘I saw the president of the United States!’ "

Eastern Hockey League franchise The Long Island Ducks was the anchor tenant for the Long Island Arena after the venue opened in 1959. The team was known for its rough and tumble approach to the sport.

"The hockey fights were notorious," says Michael Davern, 61, of Commack. "You would even see brawls in the hallways of the arena. It was the wild west back then."

Part of the raucous fun came from the fans’ involvement in each game.

"You were really in it because there was no plexiglass around the sides of the rink," says Charles. "The players would get checked against the boards and land in your lap."

Peter DeMarco, 73, of Medford says, "Without anything on the sideboards, you could get hit with a stick or a puck. People in the first row used to wear football helmets. It was nutty."

"The league was very intense. If you ever watched the [1977 Paul Newman] movie, ‘Slap Shot’ — that was it," says Deschamps, 81, of Long Beach. "When John Brophy came to the Ducks, he said to me, ‘You put the puck in the net and I’ll take care of the rest.’ Our defensemen were some tough cookies. There weren’t too many teams that messed with us."

"The fans were so involved with the team it was crazy," says Blake. "The players on the ice could hear individual fans yelling at them and they would acknowledge the ones that were giving them grief."

After the Ducks came the brief tenure of the Long Island Cougars from 1973-75.

"The Cougars had potential, but the Eastern Hockey League folded because of rapid NHL [National Hockey League] expansion. The minor leagues couldn’t survive," says DeMarco. "The salaries were skyrocketing and they couldn’t keep up."

All the focus went to the New York Islanders at the newly opened Nassau Coliseum in Uniondale during 1972.

"The Long Island Arena was primitive in comparison to the Coliseum," says Blake. "The Coliseum was a shining jewel. It looked like fantasyland with a beautiful concourse around the outside, good lighting and comfortable seats."

In addition to hockey, the Long Island Arena was known for its concerts, which drew big acts such as Frank Zappa, Blue Öyster Cult, Black Sabbath, the Bee Gees, Styx and more.

"You really didn’t have to go to Madison Square Garden. There was so much right there," says Vic Berretta, 60, who grew up in Commack. "Nobody wanted to spend the money to drive into the city. You couldn’t ask for anything better."

The Who played Long Island for the first time when they headlined the arena on Dec. 1, 1967.

"I was so close to the stage I could see the rubber bands in bassist John Entwistle’s mouth for his braces," says Mark Cheron, 68, who grew up in Commack. "The show was really loud. My ears were ringing for two days!"

Back in 1975, Hot Tuna played a record long show at the venue running over six hours ending at 2 a.m.

"People were falling asleep in their seats and waking up screaming, ‘TUNA!’ " says Steven Gianturco, 63, of Holbrook. "I remember guitarist Jorma Kaukonen stopping in the middle of a solo to tie his shoes. My friends and I were hysterical over that for years."

But perhaps the most famous show was when singer/guitarist Peter Frampton opened for Ten Years After on August 24, 1975, which was partially recorded for his multiplatinum double live album, "Frampton Comes Alive!" released in 1976.

"Peter Frampton just blew everybody away and no one expected him to be as good as he was," says Clay Connor, 61, who grew up in Smithtown. "Classic rock radio still plays 2-3 different cuts from that album. Whenever it comes on and I’m with a group of people, I’ll say, ‘I was at that show!’ "

HOME OF THE CIRCUS

One attraction that came to the Long Island Arena annually was the Clyde Beatty Cole Bros. Circus. This three-ring attraction would be held in a giant tent six-stories high the length of a football field outside the venue.

"They would let the elephants parade in from a distance. It was really cool to have the animals come to us," says Nancy Roth, 62, who grew up in Commack. "I remember seeing jugglers and the ringleader, who was dressed in a Gene Wilder-like costume."

"Playing my hometown was really cool. My parents and high school friends would all come out to support," says Haverstrom, 61. "My job was to sync up the music with what was going on in the show."

Before they landed in New Jersey and then Brooklyn, the New York Nets(who actually began as the New Jersey Americans) called the Long Island Arena home for one season, 1968-1969. The American Basketball Association team also played locally at the old Island Garden in West Hempstead and Nassau Coliseum. (The Long Island Arena was also home in 1962 for the New York Tapers of the short-lived American Basketball League, the organization that introduced the three-point shot to pro hoops.)

John Newman, 65, of Commack sold subscriptions for Newsday as a young man. One day along his route, he made a sale to Nets guard Bobby Lloyd, who befriended him.

"Bobby used to give me free tickets to the games and the team’s signature red, white and blue basketballs," says Newman. "Later in the year he took me in the locker room to get all the players’ autographs and shake their hands."

Toward the end of its run, the Long Island Arena turned into a flea market that featured hundreds of vendors spread across the arena floor and around the outer corridor.

"You could get anything there from socks to electronics to food to jewelry to baseball cards," recalls Lance Koppell, 58, of Huntington Station. "The variety was amazing."

Berretta says, "Even though you could score some real good deals it was kind of a downer because they weren’t doing anything there anymore. The shows were gone and the stands were empty. It was a bit depressing."

On July 31, 1996, the Long Island Arena closed down to make way for a $25 million dollar shopping center, the Veterans Memorial Plaza. Today Miller’s Ale House occupies the actual address of the arena (and was the site of a 2019 reunion of several Ducks players and their fans).

"Growing up in Commack the Long Island Arena was the greatest place to go. When I heard they were knocking it down, I felt kind of sad," says Paino. "It was like the end of an era."

BEYOND THE DUCKS AND NETS

Aside from hockey and basketball, the Long Island Arena hosted a variety of different sporting events from time to time.

“They would have matches on a big black & white projected screen,” says Michael Davern, 61, of Commack. “But, it was always a packed house like it was a live fight.”

Roller Derby - A regular attraction was the wild game of roller derby, which was played on a ramped wooden track with a wrap around railing.

“The games were scripted. It was like wrestling on wheels,” says Paul Blake, 67, of East Meadow. “It was intense because they would whip around the track and try to knock each other over the railing. It was a very physical game but a lot of it was choreographed.” - DAVID J. CRIBLEZ