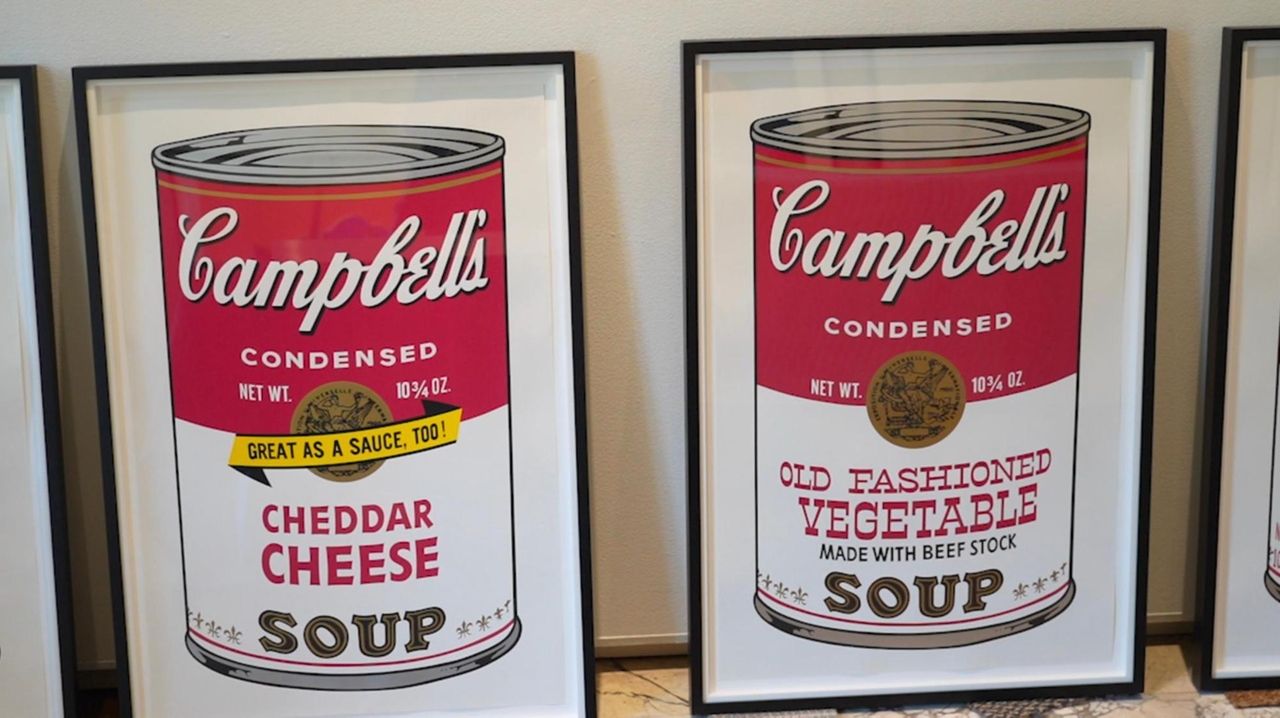 The Nassau County Museum of Art in Roslyn hosts an exhibition of more than 100 works by Andy Warhol, including those famous Campbell soup cans, May 8 to Nov. 7. Credit: Corey Sipkin

"They always say time changes things, but you actually have to change them yourself," Andy Warhol once stated.

Half a century ago, he changed art, and now his art is popping into the Nassau County Museum of Art for a surprise visit. "Andy Warhol: A Life in Pop, Works From the Bank of America Collection" is a career-spanning exhibition of a dozen portfolios with close to 100 major works that opens May 8 and runs through Nov. 7.

Warhol, who had a home in Montauk, is overdue for 15 minutes of fame here — this will be his first retrospective show on Long Island. In the early 1960s, when the fervor for Abstract Expressionism waned, Warhol turned his uncannily canny eye on the American landscape, both cultural and physical, and gave us back what he saw — movie stars like Marilyn Monroe, events from the headlines and lots of soup cans. High and low, urgent or mundane, they were all worthy of Warhol's cool gaze, and all show up in his art, and in the exhibition.

"Everything is here," said Charles Riley, director of the museum. "Marilyn is here, Campbell's soup cans in multitudes, Muhammad Ali, celebrity portraits, and another portfolio called 'Myths,' where you've got Uncle Sam, Mickey Mouse and the Wicked Witch from 'The Wizard of Oz.' " Riley promises surprises, as well, including works that show the artist's more thoughtful side. "One is a group called 'Sunsets' that are really soothing and tranquil," Riley said.

While scores of iconic Pop images will be on view, they almost weren't. In early April, Riley said he received a call from Connie Verducci, the senior vice president at Bank of America who manages its not-for-profit partnerships in New York and on Long Island. She told him about an unexpected availability of the exhibition that has been presented in top museums in England, Italy, South Africa,and across the United States. While a show of this size usually takes years to develop, Riley jumped at the opportunity, juggled schedules, cajoled, wrangled and brought it all together in a matter of weeks.

"I didn't think of anyone else. I really wanted this to be at the Nassau County Museum," said Verducci.

This is the second major exhibition Bank of America has sponsored on Long Island. In 2019, its collection of American Impressionist works appeared at the Heckscher Museum in Huntington. The bank's "Art in Our Communities" program covers all exhibition costs, including outreach and educational programs. As Verducci eyes other local museums for future shows, the bank has become a major cultural supporter on Long Island.

Education is vital for both the museum and Bank of America, and classes will be given online to local schools. Both Riley and Verducci hope student groups will visit later in the year. "When someone experiences the arts for the first time, it can really change their life. It may not change it today, but may change it three years from now, or 10 years from now," Verducci said, adding that art's impact reaches far into the community. "I see this as a real economic driver. When you see a booming arts neighborhood, it's usually a thriving community."

With Warhol-designed album covers for the Rolling Stones and Velvet Underground, screen prints of Einstein, Dracula, and Superman, and portraits of endangered species, there's something for everyone — kids and adults, the curious and the serious, scholars and first-time viewers.

Warhol was the ultimate influencer before it was a thing. Most people know what a Warhol looks like. Whether portraits, landscapes, still lives, or nature studies, his works are big, bright, brash, relatable, and he ran off multiples of them in his studio, all the same. Or were they?

Riley says the key to this exhibition is that it shows that even within a series, the images evolve. "Even connoisseurs of Warhol will find fascinating the hand-colored flowers from 1974. He took screen prints and then started messing around with them. This is our chance to sort of look over the shoulder of Andy Warhol as he thinks through this, as he touches it. The flowers are actually where I get closest to him," explained Riley, who said he'd met Warhol many times. "It's like watching Monet with his series of haystacks or cathedrals. Warhol's adding a color, he's changing the color as he's going through."

The show is all about change — how Warhol's work changed within his oeuvre, how it changed the trajectory of art, and mostly, how it changes the way we respond to everything from fame to the soup we eat for lunch. "There's a sort of inherent romanticism about it," said Riley, "elevating the commonplace."

WHAT "Andy Warhol Portfolios: A Life in Pop, Works from the Bank of America Collection"