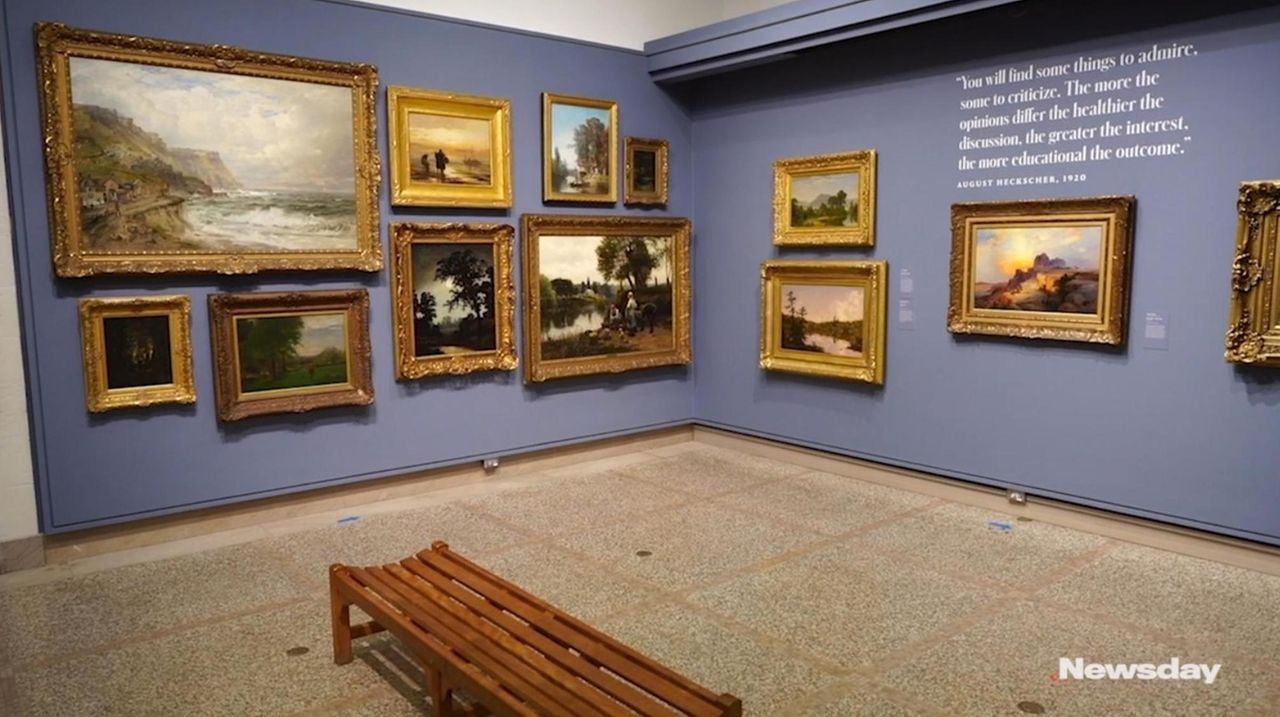 Karli Wurzelbacher, curator of the Heckscher Museum of Art in Huntington, talks about the museum's 100th anniversary celebration which features special exhibits and a weekend of music and events July 10-11. Credit: Newsday / Chris Ware

Postponed from last year due to the coronavirus pandemic comes "The Heckscher Museum Celebrates 100: Tracing History, Inspiring the Future" which opened June 5 as a special exhibition to mark the Huntington venue's centennial. On July 10, the celebration culminates with a special day featuring live music, creative activities for kids and even edible artworks. The museum is filled with art old and new, all lined up to tell its story and share its treasures.

"I felt to fully cover the 100 years and try to talk about every year or event, we would just be skimming the surface," said curator Karli Wurzelbacher, who's been organizing the show since she started at the museum in 2019. "I thought instead to do concentrations on just a few moments, or chapters."

HOW IT ALL BEGAN

The museum's growth came in spurts, and Wurzelbacher focused on contributions, connections with artists, and one particular woman curator that forever transformed the institution.

"The first chapter is our founding by the Heckschers. Their gift was initially about 185 paintings," she explained.

When the museum opened in 1920, all the paintings were on the walls, so Wurzelbacher decided to create a salon-style presentation — with pictures stacked practically floor to ceiling in one gallery — to evoke those early days. Look for classically inspired marble statuary, paintings of Venice, pastoral landscapes from the 1800s and a rare appearance of a German Renaissance masterpiece: Lucas Cranach the Elder's 1534 painting "Virgin, Child, St. John the Baptist and Angels."

Cranach's works hang in the Louvre, the Prado, the Hermitage, the Metropolitan Museum and also, through January, in Huntington. "You don't have to go anywhere," said, Wurzelbacher, "we have great art world-class are right here."\

To illustrate that further, other galleries focus on artists who lived locally, but were known globally. When George Grosz fled Nazi Germany, he settled in Huntington and became a friend of the museum, teaching and even judging art contests. His monumental painting, "Eclipse of the Sun," a biting commentary on empty-headed politicians, dominates one wall, and it's another Heckscher chapter unto itself.

"The collection really didn't grow between 1920 and the late 1960s, when Eva Gatling, the most important director in the museum's history, arrived. I focus on her and her achievements quite a bit," Wurzelbacher said.

Gatling galvanized the entire community when the chance to purchase Grosz's most renowned work arose. There's a photograph in the exhibition of Huntington High School students presenting a check to Gatling to help buy the painting.

Acquisitions like that, as wells as paintings and archival material from artist couple Arthur Dove and Helen Torr, who lived on a houseboat in Huntington Harbor, significantly elevated the collection. More than 300 extraordinary pieces of American Modernism by artists like Georgia O'Keeffe, Frank Stella, Florine Stettheimer, and Charles Prendergast, donated by local collectors D. Frederick Baker and Ronald G. Pisano, bridged a gap in art history with masterworks. All get special highlights in the exhibition.

The final gallery offers a glimpse of how the museum has kept current, with works by contemporary artists. It features a color-saturated, abstracted landscape by Nigerian born Midwestern artist, Odili Donald Odita and a multimedia installation by local art star Howardena Pindell, a long-time professor at Stony Brook University. Wurzelbacher said, "Wherever possible I wanted to highlight the contributions of women and also artists of color."

Nearby, Gabriela Gonzalez Dellosso's 2018 painting, "Homage Ode: Rachel Ruysch" hangs next to a 19th century still life by George Forster. Each is meticulously painted and features fruits and flowers placed against a dark background. Wurzelbacher juxtaposed them deliberately, because, she said, Delloso's work can be read as a reaction to the limited diversity of the founding collection. "Conversations," Wurzelbacher said "are what keep the museum vital."

With a century behind it, the Heckscher looks forward to new chapters, and the community can help write them. There's a viewer's choice competition both online and at the museum. Pictures of four recent acquisitions face off, and whichever gets the most votes by July 25th (and twice more during the exhibition) will go on a featured wall.

Wurzelbacher said she's trying to convey to the community that the Heckscher Museum is there for them. "I hope the take away is a sense of connection, even a sense of ownership, that this is their collection."

WHAT "The Heckscher Museum Celebrates 100: Tracing History, Inspiring the Future"

5:41
Two turntables and a microphone made Biz Markie a legend
5:41
Biz Markie's best friend shares memories of the hip-hop artist
Who's next? Jodie Whittaker to leave 'Doctor Who' in 2022
Margaret Cho joins cast of 'Fire Island' movie
7:26
The Buzz: Michael Bishop talks about 'Spin,' his upcoming Disney movie
PBS' 'Arthur' to end after its next season
Didn’t find what you were looking for?