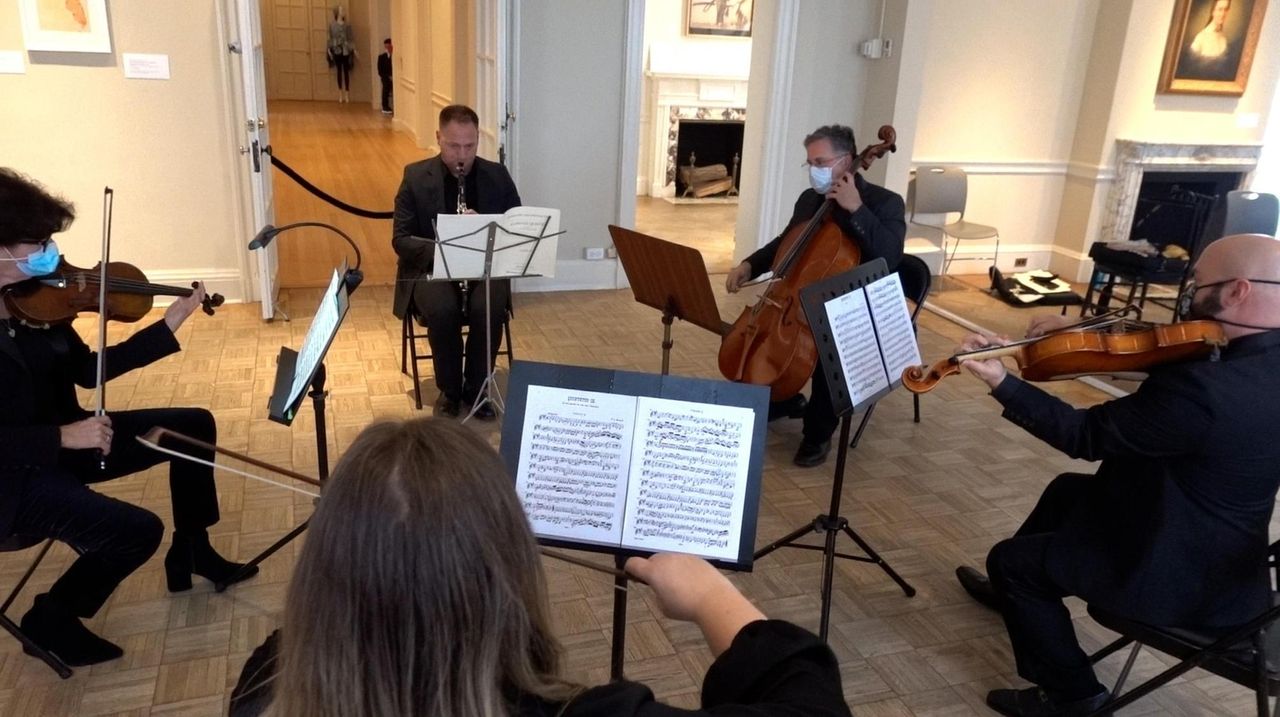 The Massapequa Philharmonic performs for visitors at the Nassau County Museum of Art in Roslyn on select Sundays as part of a new residency. Credit: Debbie Egan-Chin

Exactly one year ago, Massapequa Philharmonic director David Bernard was feeling out of this world. The orchestra had just finished a successful performance of "The Planets" at Molloy College's Madison Theatre in Rockville Centre and its members were gearing up for a spring brimming with concert dates across Long Island.

Then the coronavirus pandemic hit and suddenly their instruments were silenced.

"The restrictions were so tight. we could barely get a chamber music orchestra together anymore," Bernard said.

What a difference a year makes. Not only has he organized a chamber music ensemble, but the Philharmonic has now become the orchestra in residence at the Nassau County Museum of Art in Roslyn Harbor performing there one or two Sundays a month. Visitors who come to then will not only be treated to great art, but they can hear Mozart performed as they stroll among the exhibits.

"It’s exactly what everybody needs right now — to have great art in front of their eyes while their ears are filled with the beauty of Mozart at the same time," said Charles Riley, director of the Nassau County Museum of Art. "It's the perfect duet. It's like when you pair a great wine with a great roast, and this is a great pairing. Art and music really love each other."

And museum patrons are feeling the love. For Karen Cunningham of Williston Park, who was visiting with her friend, Erica Stolba of Lindenhurst, the music was a nice bonus to go with the price of admission.

"I think it’s wonderful. Any kind of overlapping of the arts is a perfect mix. This was a pleasant surprise," said Cunningham.

At one point, she and Stolba looked in as the socially distanced quintet members played chamber music in a roped-off room on the second floor.

"It’s heavenly," agreed Debbie Venezia of Farmingdale who was also visiting. "It's so nice to hear live music. That's something that I've really missed."

Chances are she hasn't missed it nearly as much as the performers of the orchestra. Anne Mandaro, a violinist in the orchestra, said she spent the summer taking a 12-week online music course taught by the assistant concert master of the Los Angeles Philharmonic.

"I used it as a time where I could improve myself rather than sit home and mope," she said. "When the pandemic happened, I lost my social life because my social life is the orchestra. When you lose that interaction, it’s really, really hard. So to be able to play again is a gift. And it's safe in a small group like this."

IT STARTED IN A TENT

The idea for the Philharmonic performances began in September, two months after the museum reopened.

As restrictions at public places began to loosen last summer, Bernard approached the museum about doing an outdoor concert. As the Philharmonic played in a tent on the museum grounds, guests could watch the musicians from outside the tent. The music could also be heard inside the building.

"David is a very gifted musician and conductor and what he's doing fits right in with what we’re trying to do at the museum," Riley said. "When they did Beethoven, people were out on the lawn with their jaws open."

The success of the summer performances led to sessions between Riley, Bernard and the orchestra's board members and on how to continue their collaboration. By the beginning of this year, a plan was in place to sequester the orchestra members as music wafted throughout the building.

"The sound is so good in this mansion, it almost feels like this place was built for chamber music," Riley said. "We sorted out what’s good for my visitors. This is not a concert and there no chairs, but we made it so that they can see the musicians."

The positive reaction to the Philharmonic appearances has now led to plans for doing outdoor performances once spring and warmer temperatures arrive. For Bernard, the experience has been especially rewarding.

"Amid all of the challenges and difficulties brought on by the pandemic, we've actually experienced a huge positive," Bernard said. "We've found a rainbow in the storm clouds."