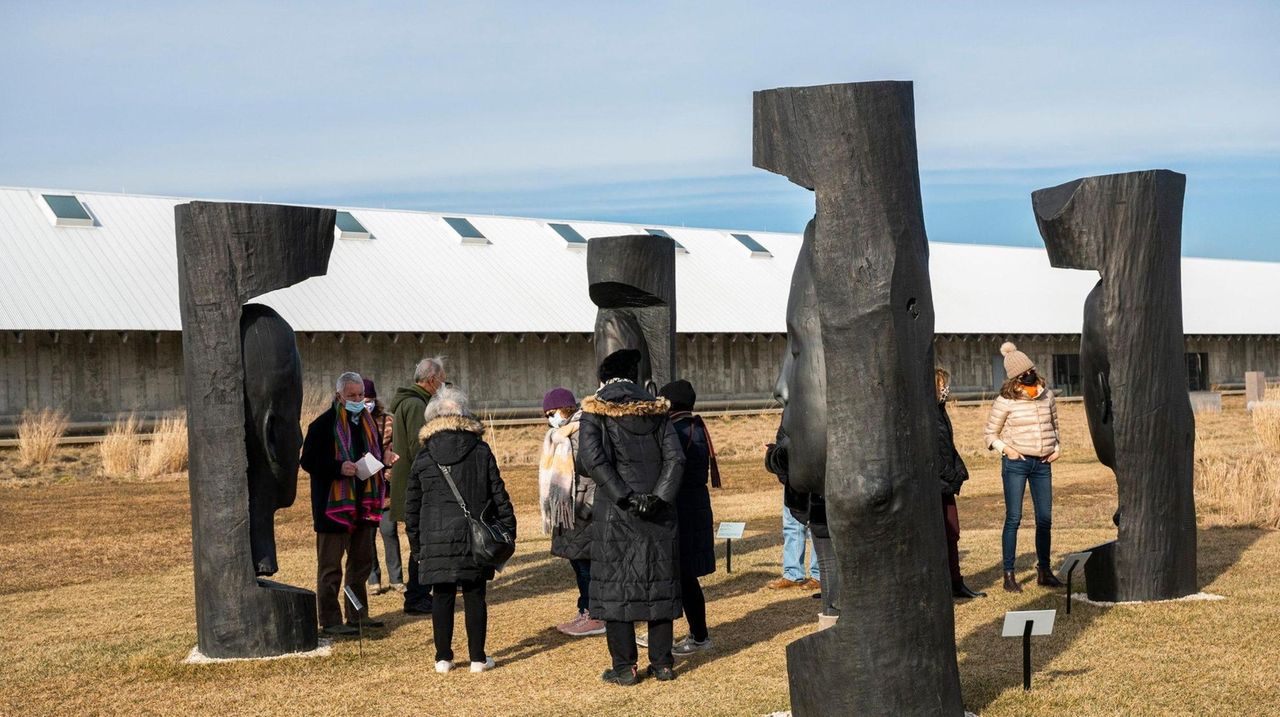 Interim director of the Parrish Art Museum Chris Siefert talks about the genesis of the walking tour art exhibit, which gives the community something to do outdoors during the pandemic.  Credit: Gordon Grant

On a wind-whipped Friday afternoon in late February, roughly 40 people gathered at the Parrish Art Museum in Water Mill. Bundled up in warm coats, some wearing scarves and gloves, they were here for a walking tour of the museum’s outdoor art exhibit —14 acres of sculpture-dotted meadows titled "Field of Dreams." Despite the chilly air and strong winds, the tourgoers kept pace with the docents, stopping to look at a Jim Dine here, a trio of Max Ernsts there.

"I Googled activities for this weekend because I’m sick of sitting at my desk and typing away at my computer talking to nobody," said Trish Neve, a photography agent from Sag Harbor who took the tour with a friend. "I thought it sounded wonderful to get a little culture, even on a cold day. I don’t mind — you can do anything for an hour."

Though the Parrish’s indoor galleries reopened March 12, the museum intends to keep holding its outdoor walking tours. The next tour, which will be led by Longwell, is March 26 at 3 p.m. Beginning April 2, tours will be held weekly. They’re free with museum admission, but advance registration is required.

For local art lovers, the Parrish’s walking tours have been a welcome respite from the indoor isolation of the pandemic. The tours began last summer with the opening of "Field of Dreams," which comprises more than a dozen newly acquired sculptures installed in the grassy lawns surrounding the museum’s concrete, barnlike building. Initially held weekly, the tours regularly filled to capacity and attendance remained strong all winter, when frequency was reduced to one tour per month. Even in January, patrons showed up to tromp over snow-covered ground and gaze at such works as "Untitled" (2014), a frolicking bronze stick-figure by Joel Shapiro, and "Arcs in Disorder" (2006), a collection of curved steel beams by Bernar Venet.

Chris Siefert, the Parrish’s interim director, said he was "pleasantly surprised" by the response. "When you run an arts and cultural institution, you kind of hope for the best and expect something less," he said. "But it’s such a beautiful outdoor setting, and I think people have been missing the ability to even be in a group."

"Field of Dreams" was hatched early in 2020 when Parrish staff realized that the museum would be closed for the foreseeable future. "We had to close our galleries and look to the outside of the building, where we might be able to welcome people," said Alicia Longwell, the Lewis B. and Dorothy Cullman chief curator at the Parrish. "It just seemed like the time was right."

Meetings began in May and plans solidified in June, according to Siefert. "This is the kind of project that in a real-world environment for a museum might take a year," he said. "There’s a lot of sourcing, a lot of dialogue with curators, there’s budgets to figure out, partnerships to build." Nevertheless, the exhibit officially opened Aug. 20 and the first walking tour was in September. "We had the right team that came together," Siefert said.

The tour takes in a total of 16 newly acquired sculptures, including Dine’s mock-classical torso "The Hooligan" (2019), Joel Perlman’s welded-steel "East Gate" (1989) and several totemic bronze heads by the Spanish artist Jaume Plensa. Tours also take in an existing pair of sculptures from Roy Lichtenstein — "Tokyo Brushstroke I and II" (1994) —which has been stationed at the museum’s entry point just off Montauk Highway since 2014.

"We looked for sculpture that would be engaging and interesting," said Longwell. "The thing about sculpture is that people relate one-on-one to the physical presence. You can’t walk into, or around, a painting."

During last month’s tour, patrons who stopped to admire a temporary installation, "Bonac Blind," found the artist himself standing nearby. Scott Bluedorn, an East Hampton native, explained to the crowd that his piece — a whimsically reimagined duck blind featuring a bed and a wood-burning stove — is a comment on rising real estate prices and housing insecurity on Long Island. "I might actually live in it," Bluedorn said, noting that he’s been unable to find an affordable apartment in the area.

Tour capacity can be as high as 48 patrons, depending on staffing; guides divide attendees into smaller groups. Masks are required at all times. Children and well-behaved dogs are welcome.

"It’s totally volunteer, and we’re happy to do it," said docent Mary Lou Cohalan of Bayport, her fingers reddening in the February cold. "The volunteers have almost gotten out of the business of volunteering because of COVID. This is as much a pleasure for the docents as it is for the people who come here."

Gloria Honeck of Water Mill couldn't agree more. "It’s nice to get out of the house and be among people," she said while strolling through the meadows last month. "This is lovely," she said of the late-winter weather. "The snow is melting, I see green under the snow. I smell spring!"