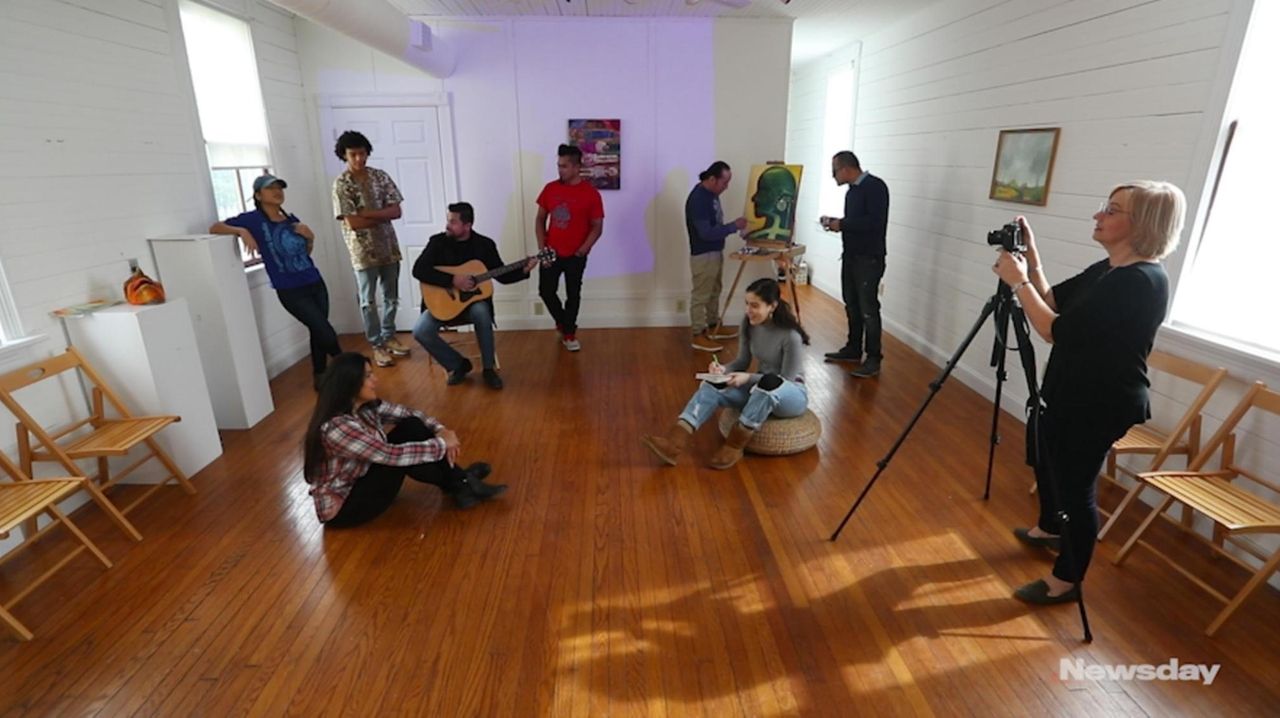 Teatro Experimental Yerbabruja will open its doors and inaugurate a series of arts programs on April 5 and 6 at its new location in the Second Avenue Firehouse in Bay Shore, just off Main Street. Margarita Espada, artistic director of the nonprofit organization, says she hopes the space will help bring the community together through art.  Credit: Randee Daddona

They're resilient, colorful, and vibrant--both the yerba bruja plant and the artist collective that bears its name.

Teatro Experimental Yerbabruja opens its doors and inaugurates a series of arts programs in its new home in Bay Shore on April 5 and 6. The nonprofit organization founded by Margarita Espada, which has been bringing theater, music, dance and art to Long Island communities for more than a decade, has moved to the Second Avenue Firehouse, just off Main Street.

"Crossroads" is the theme of the opening multimedia presentation April 5. It's a chance to see the space, view art, hear music, and meet the 14 artists in the Yerbabruja collective. "Though we're coming from different directions, we're meeting there. So we wanted to work with that concept," says Espada. "There are Latin-American, African-American, multigenerational artists … performing artists, poets, painters, theater. So this is ‘Crossroads,’ where we'll get together, and from there we move."

Teatro Experimental Yerbabruja's launch includes an art exhibit, live music, dance, poetry and an interactive video with live performers responding to what's on screen. "When we open the doors, we'll already be working and performing. People will be writing, creating art, making music. Then, after half an hour, we'll have a 30-minute show presenting ourselves." A reception follows, for the audience to mingle with the artists. Espada plans the event as an introduction and an announcement of things to come.

A SAFE SPACE FOR ARTISTS

The group had been based in a storefront in Central Islip. When the building became unavailable last December, Espada paused, wondering if it might be time to focus more on her own art. But her belief in Yerbabruja (the plant, she notes, has healing powers) and her commitment to community convinced her to continue. "There's a need," she says, "for a safe space for all artists, especially artists of color and immigrants. We want to unite the community through the arts, to give an opportunity to everyone. That brings social change through social conversation."

For the historic Second Avenue Firehouse and the gallery it's housed since 2000, the opening is both a kind of artistic collaboration and a new chapter. In the 1990s, South Shore Restoration was formed to buy and revive homes on Second Avenue.  At the end of the street was the century-old firehouse, "like an exclamation mark," says Susan Barbash, president of South Shore Restoration and director of the gallery. The building has been used in the past by the fire department, as the home of a Jewish congregation, a restaurant, a factory and a rooming house.

Envisioning an arts center, the organization bought it, raising $400,000 to reconstruct it from the foundation up. They've been presenting exhibitions of local artists since, but Barbash felt the space could hold more. When she heard Teatro Experimental Yerbabruja needed a home, she reached out. In addition to two or three Firehouse Gallery exhibitions a year, says Barbash, now things will be happening all the time. "That was a great moment," recalls Espada. "Susan saw the opportunity, and we needed the space. Two people who share the vision about working for the community. It was a match."

On Saturday, every half hour, a specific art form will be showcased. Depending on when visitors arrive, they might be invited to paint with an artist, take a guitar or percussion class, or learn some dance steps. "It's an open house where people can see the programs, and maybe join or sign up for a class," Espada explains. "We'll be presenting all the different things we're programming - life drawing, painting, lectures about art, yoga classes, Salsa, storytelling for children in both English and Spanish. We also have open mic for music and poetry, also bilingual." Schedules and details can be found on their website.

Says Espada, "When artists work together, and when they have the resources, they can have a vision. And with equal opportunity, they can share their perspectives and unite. And that's power."