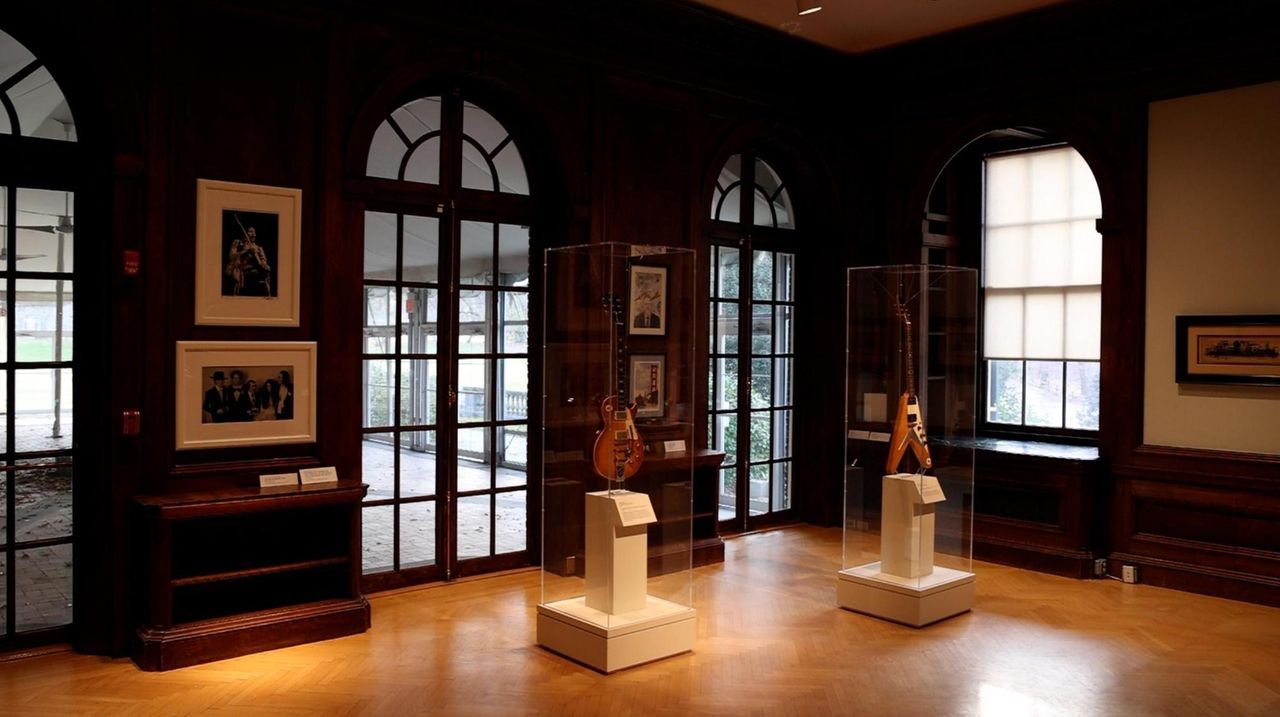 What inspires you? If it's art, music, video, rock stars, popular culture or even the sound of silence, the Nassau County Museum of Art in Roslyn has it. In a rare whole-museum takeover, "Songs Without Words: The Art of Music," which runs through March 6, fills every gallery with music-related paintings, drawings, photographs, scores, manuscripts and instruments from around the world.

Co-conceived and developed over more than two years by director Charles Riley and curatorial associate Jennifer Haller, the exhibition brings together works from six continents stretching hundreds of years. There are photos of musicians; concert posters; paintings by Miles Davis, Frank Zappa, Tony Bennett and Joni Mitchell; a sculpture by Paul McCartney; an artwork transformed into performance art by a pop star and a theatrical maestro; and a custom-built room-sized instrument.

Don't go expecting a concert, though several are planned during the run of the show. Rather, these are complex, sophisticated works of art — from Cubist paintings to iconic photographs — that are stunning, often fun, and always relating to sound.

"You have pockets of very, very quiet places and then you're lured into a space where there's music," Riley said, describing the exhibition.

One of those spaces lured Long Island's multi-Grammy winning singer-songwriter Jimmy Webb and his wife, Laura Savini, when they visited in December. The couple, who lent several pieces to the exhibit — including a self-portrait by Webb and one of his Grammy Awards — found resonance in Aaron Taylor Kuffner's "Gamelatron," a handmade kinetic sculpture. Shimmering circles of hammered metal reflect light from the museum's grounds while computerized, self-playing gongs fill the gallery with soothing, meditative sounds. It's a contemporary take on the gamelan, an ancient instrument used in ceremonial and spiritual practices in Indonesia.

"I just found that stunningly beautiful to listen to, and to watch, and to experience," said Webb. "The room is solely devoted to this array of instruments which are gorgeous. I could've stayed in there all night and just sat and listened to it."

He added, "In these kind of tumultuous times when everybody is just a little edgy, to walk into that room was kind of like therapy."

For a faster pace, rock and roll royalty is saluted in a throne room of sorts that features the Les Paul guitar Keith Richards played when the Rolling Stones first appeared on "The Ed Sullivan Show" in 1964 and the Gibson "Flying V" Neil Young toured with in the early 1970s.

"Lady Gaga: Mademoiselle Caroline Rivière" is a life-size video by renowned East End director Robert Wilson that requires a longer look. In it, Lady Gaga is costumed and posed as the subject of a painting by Jean-Auguste-Dominique Ingres. She moves slightly and slowly (watch her eyes) — just enough for the viewer to perceive that this is a performance, rather than a photograph. Riley noted that for hundreds of students who've visited the exhibition, this work seemed particularly captivating. Savini, a member of the museum's board, agreed, noting "It really shows the way music has progressed to be an electronic form, and we're seeing how art can become electronic, too."

Such harmonies and echoes are careful curatorial constructs. "We have music as a building block of sound and a building block of time," said Haller. "There are instruments from along the Silk Road, things that artisans' hands touched, and we tried to build how that resonates with the visual work." She compiled a playlist to bring the music alive, via QR codes at the museum and a link on the museum's website.

Look for pieces by David Hockney, Jasper Johns and rising art star Christine Sun Kim, who had a breakout moment at the 2019 Whitney Biennial and went on to perform the national anthem in American Sign Language at the 2020 Super Bowl.

"It's all here," Riley said. "It's loud, and it's silent. It's punk, and it's classical. It's the music of the entire world. It's like a huge jukebox. Whatever you want, put your quarter in. You'll get it."

WHAT "Songs Without Words: The Art of Music"