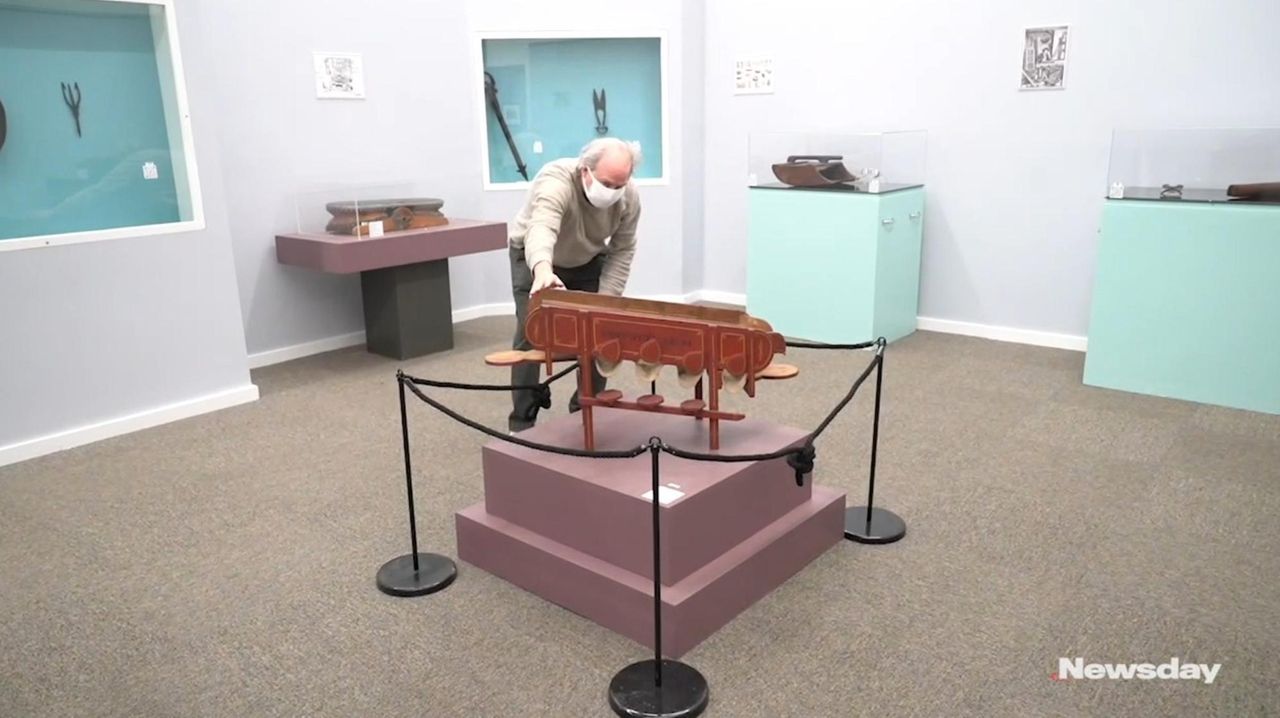 A new exhibit called "What The Heck Is That?" at the Suffolk County Historical Society Museum in Riverhead examines artifacts and objects that are difficult to explain. Credit: Randee Daddona

The Suffolk County Historical Society Museum's "What the Heck Is That?" exhibit isn't just about history, it's also about mystery. In fact, visitors literally will have no clue about what they're looking at.

The Riverhead museum has put on display about 30 objects from the more than 26,000 items it has collected since opening in the 1890s. The idea is to showcase products that were a part of normal household life more than a century ago, but have since been replaced by more technologically advanced versions.

"Every now and then people come in with an object they found themselves either in a flea market or in an attic, and they can’t figure out what it is," said Richard Doctorow, the museum's collections manager and curator of the exhibit. "They bring it down to our museum here for the answers. That gave us the idea for getting items from our own collection that are a bit mysterious to the modern eye and making an exhibit called 'What the Heck Is That?' "

He then added, jokingly, "I like to think we're Suffolk County's attic."

The interactive exhibit is also about using your smarts, as in your brain and your smartphone: New technology is employed to learn about old technology. The names of the object are not displayed. Instead, visitors can study the object and try to guess what it was used for. If they're stumped, they can scan a QR code using their phone that takes them to a web page which explains what the item is.

"It’s a wonderful exhibit for all ages. The grandparents may come in and see a few things that they used in their early childhood or maybe something they saw their parents use. The kids love the interaction and the mystery," said Doctorow, whose father is "Ragtime" author E.L. Doctorow.

And who knows, 150 years from now a similar exhibit could feature such technological dinosaurs as a rotary phone or a typewriter, he said,

While the museum didn't want to reveal too many items being displayed, it did allow four of the more unusual offerings to be highlighted. See if you can figure out what the heck each of these things was used for.

A GOOD SOURCE FOR FIBER

With its large wooden handle and sharp spikes, this device could easily pass for the Jolly Green Giant's hairbrush.

Not a bad guess, but it's a long forgotten gadget called a hatchel, which was used to prepare flax fibers — a predecessor of cotton — for weaving. The rough flax fibers were pulled through the hatchel to clean, straighten and prepare them to be woven into linen products.

THE GREAT GRANDFATHER OF THE ELECTRIC BLANKET

Several centuries ago, our forefathers — and foremothers — had their own way of heating things up in the bedroom.

A bed warmer featured a long handle connected to a metal pan filled with embers from a fireplace or coal from stove. Once filled, the pan was run over the sheets and mattress to make them all warm and toasty on those cold winter nights.

On the down side, if you weren't careful, you could end up with scorched bedding, a frequent hazard.

Perhaps you know it better as boot pull? Probably not.

With its wide U-shaped mouth and flat bottom, the boot jack was designed to help make it easier to remove boots. Just place the boot heel in the jack's mouth, stand on the back of the device with the other foot, and, voilà!, the boot comes off.

The inventors received a patent for their brainchild in 1866, which was stated it was a combination boot jack, nutcracker, tack hammer and tack remover.

At first glance, it looks like a giant clothes pin impaled by a wooden spike, but this object was actually the key to a good night's sleep.

Long before box springs sprang up, bed frames were built with a webbing of rope to support a mattress typically stuffed with feathers, hay, straw, rags, even horsehair. Over time the ropes would loosen and the mattress would sag, so a bed key was used to tighten the ropes. It gave new meaning to the term "sleep tight."

"What the Heck Is That?" exhibit