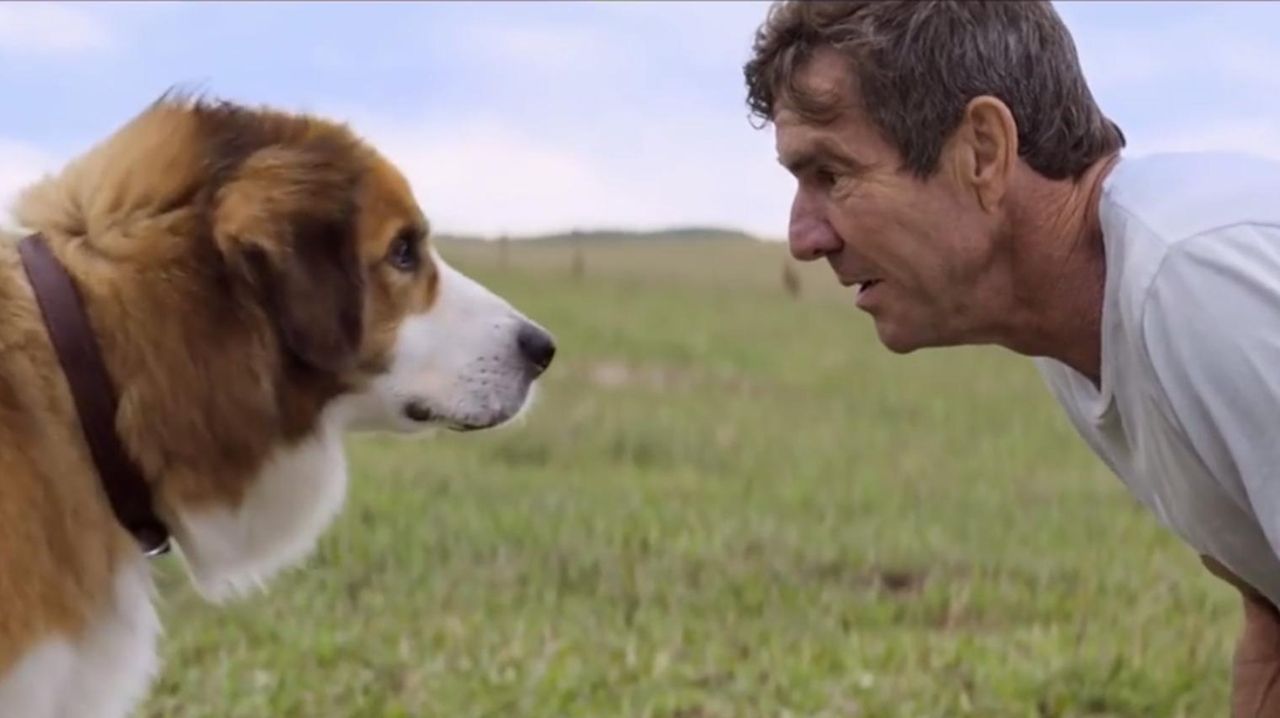 A live-action family film with Josh Gad as the voice of a dog whose soul keeps returning -- in different furry guises -- to help humans Credit: Universal Pictures

PLOT The soul of a dog is reincarnated into different breeds adopted by different owners.

BOTTOM LINE An overload of the warm-and-fuzzies whose box office may suffer thanks to a recent video showing seeming mistreatment of a canine actor.

“A Dog’s Purpose,” featuring Josh Gad as the voice of a red retriever whose soul is reincarnated into different canine forms, recently met the worst public-relations disaster that could possibly befall it: a video, taken during filming, showing seeming mistreatment of an animal. In the video, a German shepherd actor named Hercules resists jumping into a tank of rushing water but is nearly shoved into it by his handler. Later, Hercules’ fears seem confirmed when his head disappears briefly beneath the rapids.

The video seems to have been edited for maximum reputational damage, but its troubling content can’t be completely dismissed. It has turned what was supposed to be a warm-and-fuzzy movie directed by professional heart-tugger Lasse Hallström (“Dear John”) into new fodder for the ongoing debate over the ethics of using animals in movies. Whether “A Dog’s Purpose” exploited its canine actors, one thing is clear: The movie infantilizes dogs in general. It’s basically “Look Who’s Talking” with a puppy instead of a baby.

As the loyal retriever Bailey, Gad cranks his voice up to Maximum Cloy, expressing bemusement at his teenage owner, Ethan (KJ Apa), who’s always “face-licking” with his girlfriend, Hannah (Britt Robertson). “Is he searching for food?” Bailey wonders naively. Bailey will die but return as K-9 Officer Ellie (an oddly dour chapter in which John Ortiz plays a damaged cop), then a sprightly Corgi named Tino (owned by a college student played by Kirby Howell-Baptiste) and finally a shaggy St. Bernard mix, Buddy, who finds his way back to a much older and still single Ethan (Dennis Quaid, adding depth to an otherwise shallow role).

Even fuzzier than the stars here is the story, a mix of nondenominational mysticism and enforced romanticism in which dogs mostly exist to tug their owners toward a future spouse. Written in part by W. Bruce Cameron from his best-selling novel, “A Dog’s Purpose” wants to touch our hearts but never fully makes us walk in its hero’s paws the way “Marley and Me” or last year’s “The Secret Life of Pets” managed to do. About the best that could be said of this mawkish movie is that it means no harm.

Joshing around: Man of voices

Josh Gad finds his voice as a canine in the new movie “A Dog’s Purpose.” The actor is quickly becoming the man of a thousand voices, having previously done the speaking for characters in these four movies.

MARMADUKE (2010) — In this film based on the comic strip about a clumsy but lovable Great Dane, Gad had a small role as Bandana Dog, a mutt who looks dapper sporting a red bandanna around his neck.

ICE AGE: CONTINENTAL DRIFT (2012) — As the shy mole hog Louis, Gad tunneled into the character’s vulnerability. His scenes with his best pal, Peaches the mammoth, give the movie its humor and its heart.

FROZEN (2013) — Gad was all sweetness and charm as the innocent, summer-loving snowman Olaf. He’s also sure to melt your heart as he explains to Princess Anna about love and how “some people are worth melting for.”

THE ANGRY BIRDS MOVIE (2016) — In this animated film based on the popular video game, Gad played the hyperactive, motormouthed canary Chuck, who may have been yellow but was far from mellow. — Daniel Bubbeo