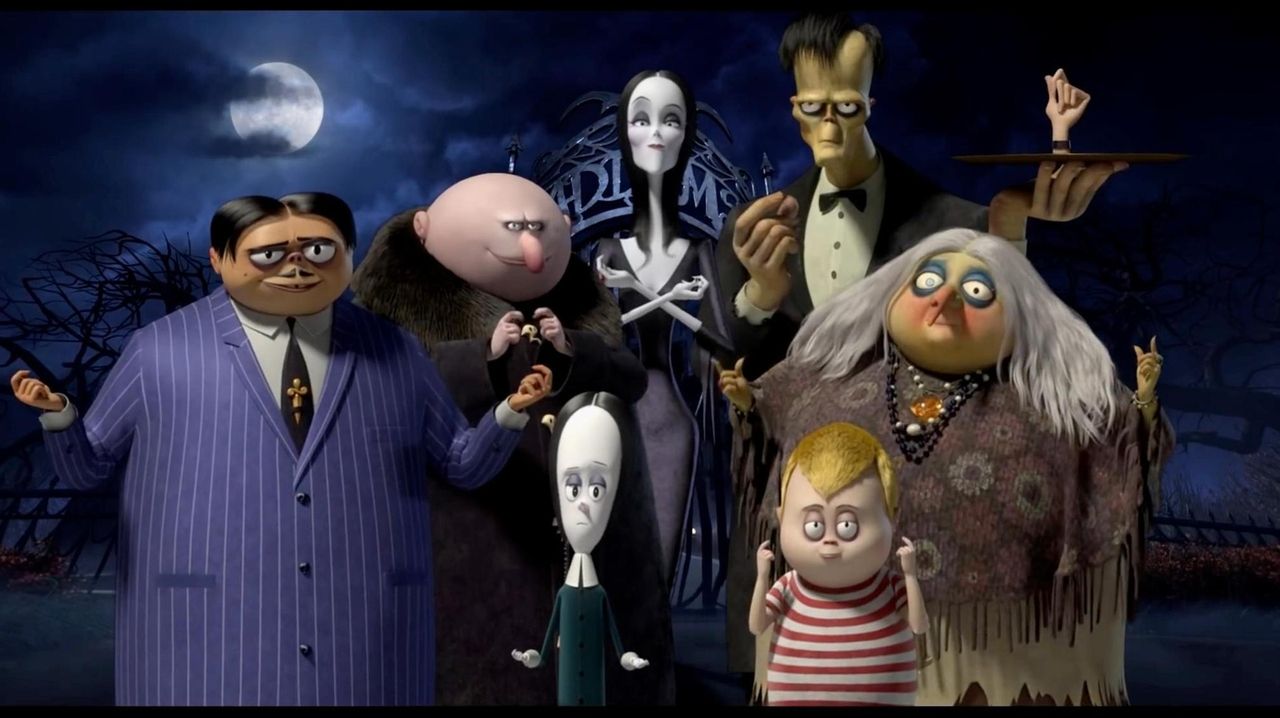 Charlize Theron and Oscar Isaac star in the new animated version of "The Addams Family," which hits theaters just in time for Halloween. Credit: MGM

"Deep down, we're all the same," assures patriarch Gomez Addams (voice of Oscar Isaac) in the trailer for the macabre animated feature "The Addams Family” — even as the well-meaning clan plays Battleship with real explosions and reanimates dead frogs in a classroom.

Following April's teaser trailer for this latest film adaptation of the Charles Addams magazine cartoons, which also inspired a 1960s TV series, this two-minute-36-second full trailer opens with the family's pet lion in place of the MGM studio logo's Leo. Then to the accompaniment of Bach's "Toccata and Fugue in D Minor," the familiar "spooky" music used for countless silent horror films and others, we see the Addams' mansion in a thunderstorm. "What a lovely morning!" declares matriarch Morticia (Charlize Theron).

As the sprightly Partridge Family theme song "Come on Get Happy" plays in humorous counterpoint, she awakens children Wednesday (Chloë Grace Moretz) and Pugsley (Finn Wolfhard) — using a sentient tree whose snaking branches burst through the windows and violently pull them out of bed. "Alright, I'm awake," a nonplussed Wednesday sighs.

The unspeaking butler, Lurch, dusts the house — by spraying dust onto the furniture — and Wednesday, as in the trailer, brings in a red balloon that her mother notes usually has "a murderous clown attached." The family tries to adjust to New Jersey suburban life, which includes a welcoming neighbor (Allison Janney) who quickly concludes, "These people are monsters" who, while they don't kill and torture, will nonetheless "ruin the neighborhood!"

The movie, set for release Oct. 11, is codirected by Greg Tiernan and Conrad Vernon, who helmed the raunchy 2016 animated feature "Sausage Party."

Cartoonist Addams debuted the darkly humorous characters in The New Yorker magazine in 1938. Their popularity continued through the decades, with a two-season sitcom in the 1960s, starring John Astin, Carolyn Jones and Jackie Coogan; two 1990s movies by director Barry Sonnenfeld and starring Raul Julia, Anjelica Huston and Christopher Lloyd; and a hit 2010 Broadway musical with Nathan Lane, Bebe Neuwirth and Kevin Chamberlin.

Other incarnations include a 1998 direct-to-video movie and a short-lived Fox Family series, "The New Addams Family."

'Gunpowder Milkshake': Flawed, but fun action movie
7:31
'The Buzz': Victoria Konefal talks about 'Days of Our Lives'
Robin Roberts: 'Jeopardy!' stressful but wonderful
How 'Ted Lasso' captured the attention of soccer players around the world
LI 'Survivor' champ to compete in MTV's newest 'Challenge'
Here's when 19 of your favorite TV shows will be returning
Didn’t find what you were looking for?