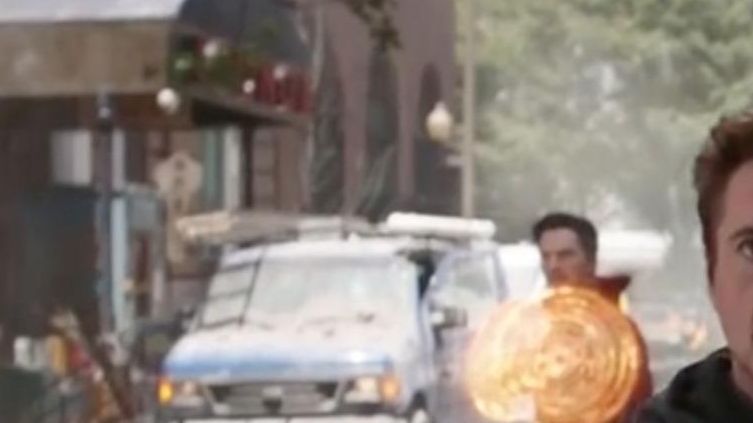 The first trailer for "Avengers: Infinity War," due out in 2018, was released on Wednesday, Nov. 29, 2017. Credit: Marvel Entertainment

As elegiac music plays behind a landscape of shattered buildings, hopes and dreams, we see shots of Tony Stark (Robert Downey Jr.), Bruce Banner (Mark Ruffalo), Doctor Strange and his major-domo, Wong (Benedict Cumberbatch, Benedict Wong), the Vision and Wanda Maximoff (Paul Bettany, Elizabeth Olsen), Thor (Chris Hemsworth) and a newly blonde Natasha Romanoff (Scarlett Johansson). The voice of Nick Fury (Samuel L. Jackson) is the first we hear, as he and various Avengers in voice-over intone, “There was an idea . . . to bring together a group of remarkable people . . . to see if we could become something more . . . so when they needed us, we could fight the battles . . . that they never could.”

The two-minute, 24-second trailer soon cuts to shots of a school bus on which high schooler Peter Parker (Tom Holland) sees the hairs on his arm standing up in a suggestion of his spider-sense, as an otherworldly circular device floats above New York City; Loki (Tom Hiddleston) holding the shimmering blue Tesseract cube first seen in “Captain America: The First Avenger” (2011); Spider-Man in his updated, even more high-tech costume; and, among other scenes, African king T’Challa, the Black Panther (Chadwick Boseman), ordering someone to restore to Captain America (Chris Evans) the shield Stark had demanded Cap return in “Captain America: Civil War” (2016).

Thanos (Josh Brolin), the powerful cosmic entity behind many of the events in the Marvel Cinematic Universe, arrives on Earth to finish collecting the “Infinity Stone” gems that will make him all-powerful. “In time, you will know what it’s like to lose,” he says in voice-over. “To feel so desperately that you’re right, yet to fail all the same. Dread it. Run from it. Destiny still arrives.”

Also on hand are the Falcon (Anthony Mackie), War Machine (Don Cheadle), the Winter Solider (Sebastian Stan) and Okoye (Danai Gurira), one of the Panther’s elite Dora Milaje guard. Conspicuously missing from the trailer are Ant-Man (Paul Rudd) and the Wasp (Evangeline Lilly).

Making a last-minute appearance, however, is a certain spacefaring sextet who headlined two other Marvel films. “Who the hell are you guys?” wonders Thor at the arrival of the Guardians of the Galaxy.

Written by Christopher Markus and Stephen McFeely (the three Captain America films) and directed by the sibling team of Anthony and Joe Russo (the last two Cap films), “Avengers: Infinity War” is set for U.S. release May 4. It leads into an as-yet-untitled fourth Avengers film in 2019.