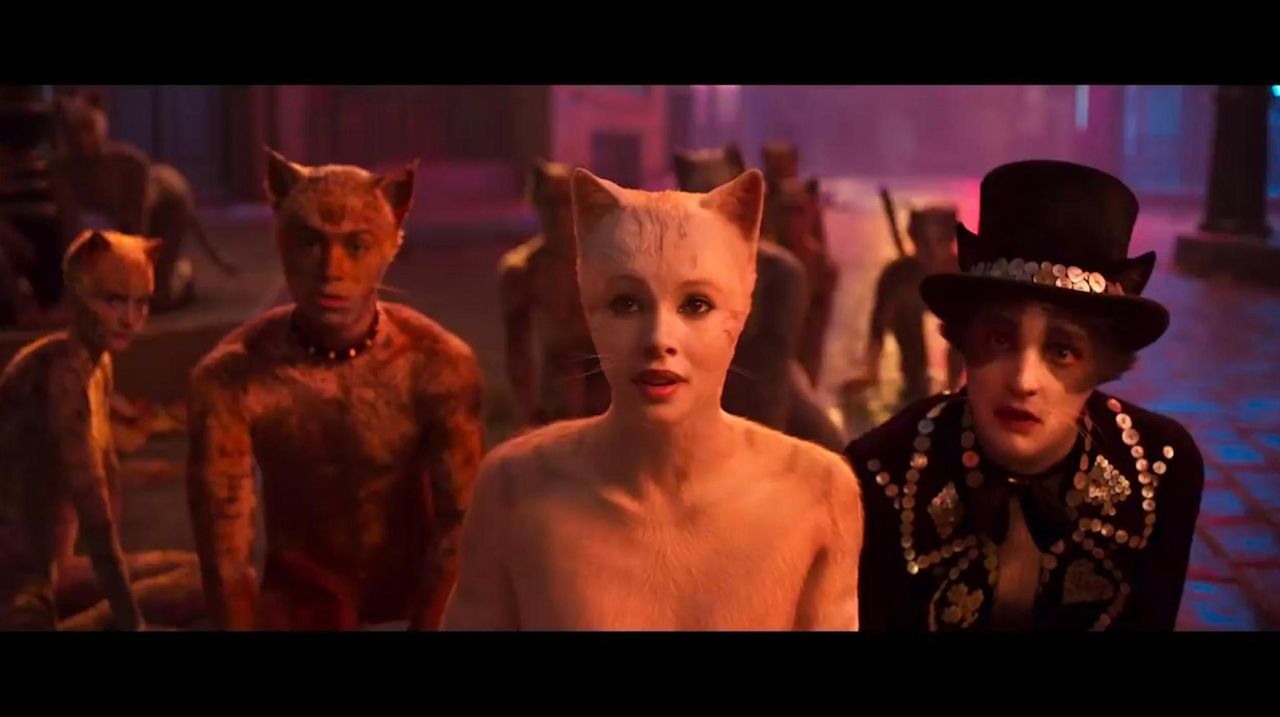 PLOT An abandoned cat is welcomed into a magical feline society.

BOTTOM LINE Fans of the stage musical may swoon, but others will be severely allergic.

"Cats," Tom Hooper's film version of the celebrated stage musical, creeps into theaters on little human feet this weekend. Featuring live dancers covered in digital fur from ankle to neck, "Cats" lies at the very bottom of the uncanny valley — a term borrowed from robotics that denotes the revulsion we feel when a creature is recognizably but not fully human. It's as good a description as any of this extravagant but unsettling musical.

Fans of the show, one of Broadway's longest-running, may feel differently about this adaptation, which is faithful in many ways. Namely, it has impressive choreography (by Andy Blankenbuehler and "cat movement specialist" Sarah Dowling), a lovely score by Andrew Lloyd Webber and not much of a story (it's based on a book of poems by T.S. Eliot).

Our heroine is Victoria, a snow-white cat played by Francesca Hayward, an expressive dancer making her feature film debut. Abandoned in a sack on a London street, Victoria meets a society of "Jellicle Cats," who each year vie to be given a new life by Old Deuteronomy (Judi Dench). The movie, like the play, introduces one cat after another, each singing a song: The bumbling Jennyanydots (Rebel Wilson), the rotund Bustopher Jones (James Corden), the arrogant Rum Tum Tugger (played as a swaggering soul man by a very good Jason Derulo), and so on. Lurking on the sidelines is Macavity, an evil cat with unnatural green eyes, played by Idris Elba; he's introduced by Taylor Swift as Bombalurina, a slinky showgirl cat.

Is it just me, or is there something disconcertingly sexual about this movie? The dancers' sensuous movements, curving tails and furry cat butts all gave me unwelcome ideas. The male dancers have been digitally spayed — nothing left but a flat space — which also brings up weird questions. Worse, every now and then an actor gracelessly sticks a leg into the air. (Please, I thought, don't do what cats usually do next.) Children's minds might not go there. Yours most certainly, and unwillingly, will.

As for the movie's "whitewashing" controversy, it's a muddle. Hayward, a mixed-race actress of Kenyan descent, plays a white cat. Is that colorblind casting? By contrast, the villainous Macavity, traditionally dressed in bright oranges and yellows, now has fur the color of Elba's skin. For what reason? At any rate, the issue seems moot when the film's overall aesthetic is so blindingly ugly.

All right, all right, the movie has its moments. Dench mostly retains her dignity, Ian McKellen delivers a poignant version of Gus the Theatre Cat and Laurie Davidson gives Mr. Mistoffelees ("the magical cat") an appealing sensitivity. Jennifer Hudson, as the fallen Grizabella, belts out "Memory," the show's famous tear-jerker, with the vocal force of an opera diva and more snot than a 3-year-old. Love it or loathe it, this "Cats" will leave a scent you won't soon forget.

They're aloof, prissy and temperamental, with claws far sharper than their intelligence, yet cats remain man's second-best friend. Here are four movies with feline stars:

FROM RUSSIA WITH LOVE (1963) — This classic James Bond film introduced the arch-villain Ernst Stavro Blofeld, though his face is never seen. We do, however, see the impassive face of the white Persian cat in his lap — evil incarnate!

FRITZ THE CAT (1972) — Robert Crumb's scandalous comic strips about a selfish, oversexed stray cat living it up in the hippie scene became the first animated feature to receive an X rating. Crumb disliked Ralph Bakshi's film, but it became a hit and spawned a 1974 sequel, "The Nine Lives of Fritz the Cat."

KEANU (2016) — The title role in this comedy vehicle for the team of Key and Peele is a hip-hop cat who wears a bling necklace and doo-rag. His voice comes from — who else? — Keanu Reeves.

KEDI (2017) — Ceyda Torun's documentary about the stray cats who live in Istanbul features over-the-shoulder shots of the animals as they wander the streets. The film won two Critics Choice documentary awards.