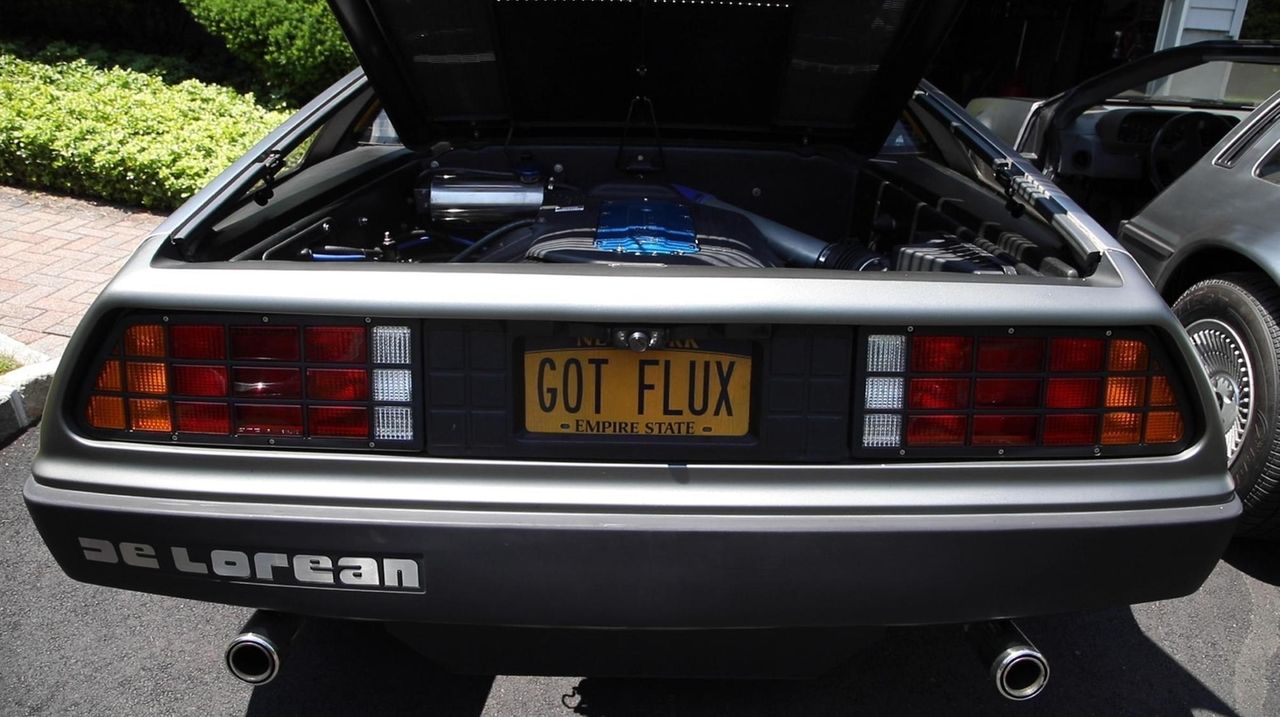 Huntington Station's Tom Neiland, an electrical engineer, has been a fan of the DeLorean since they came out in 1981. He has owned two since the late 2000s and on Tuesday, spoke about being a member of The DeLorean Mid-Atlantic Club and co-founding the Long Island — New York DeLorean Motor Club. Credit: Barry Sloan

If you ever spot a DeLorean cruising around Huntington Station, chances are the man behind the wheel is local resident Tom Neiland, an electrical engineer who has owned the car since the late 2000s. It takes some work to maintain, he says, and it’s not the safest vehicle — no air bags — but the stainless-steel coupe with the distinctive gull-wing doors never fails to get a reaction from passersby.

“It really brings fun and happiness to people when they see it,” says Neiland, 52. “It gets a lot of smiles, a lot of thumbs-up.”

That’s surely due to the car’s starring role in “Back to the Future,” Robert Zemeckis’ summer blockbuster from 1985. In the film, modern-day teenager Marty McFly (Michael J. Fox) discovers that a local inventor, Emmett “Doc” Brown (Christopher Lloyd) has built a time machine out of the sleek, futuristic-looking sports car. "The way I see it,” says Doc Brown in one of the film’s best-known lines, “if you’re gonna build a time machine, why not do it with some style?”

Neiland is a co-founder, along with former Jericho resident Dave Delman, of the Long Island-New York DeLorean Motor Club, an owners’ group with roughly 50 members. The club hosts several events each year — currently on hold due to COVID-19 — and helps members trade information about repairs and parts. (There’s a DeLorean repair shop in Sayville called P.J. Grady, and a small chain of stores across the U.S. with the name DeLorean Motor Company.) Neiland says owners like to tinker with their cars, not just drive them.

35 years later, 'Back to the Future' still smart, fresh

“I always find that ironic, because most of the owners are kind of introverted, technical people,” he says. “And this car attracts people to come over and talk to them about it.”

Delman, now based in New Jersey, also has a background in electrical engineering and says he converted his DeLorean into an electric vehicle. Initially he installed heavy lead-acid batteries but plans on replacing them with much lighter batteries from a Tesla, which should allow him to travel farther on one charge.

Neiland says “Back to the Future” isn’t what spurred his interest in DeLoreans, but he’s glad the movie got made. Without it, most people would only associate the car with its disgraced creator, John DeLorean, whom the FBI accused of attempting to peddle $24 million in cocaine in an effort to save his foundering company in 1982. DeLorean was found not guilty, but his reputation never recovered and his car became a symbol of hubris and failure.

Without the movie, the car “just wouldn’t have the cachet,” says Neiland. “The movie is a comedy as well as science-fiction. Everything about the DeLorean is portrayed as fun in it.”

On this day: Marty McFly went 'Back to the Future'

These days, the car’s magnetism could be considered a drawback. When “Back to the Future” played at a pop-up drive-in recently, Neiland says, he considered showing up with his DeLorean — but then thought better of it. In the middle of a pandemic, he says, “The last thing you want to do is attract all these people. It’s not great for social distancing.”

35 years later, 'Back to the Future' still smart, freshThe film's universal appeal - a clever mix of summery teen comedy, science fiction and hormonally charged fantasy - remains undiminished.  On this day: Marty McFly went 'Back to the Future'Oct. 21 is the day McFly (Michael J. Fox) time-traveled from 1985 to 2015. Read Newsday's original review of the smash film.