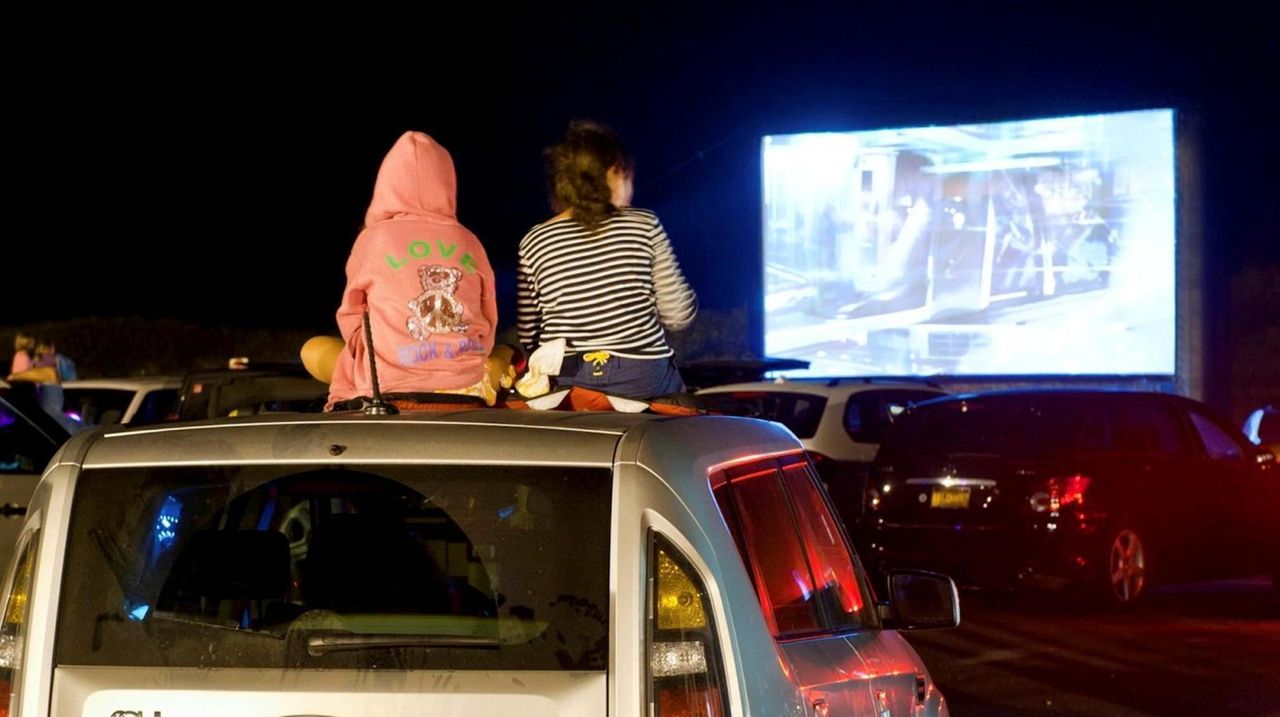 There are no true drive-ins left on Long Island, but thanks to pop-ups, we can still get the drive-in experience close to home. Newsday film critic Rafer Guzmán has the story. Credit: Newsday / Rafer Guzmán; Gordon Grant

Soon after New York State banned dining at restaurants to help stem the spread of COVID-19, Ben and Heather Frieser, the married owners of Beginnings in Atlantic Beach, began brainstorming on ways to keep their customers coming. They created takeout versions of their famous movie-night meals: New England chowder for “Jaws,” or mascarpone cheesecake for “Goodfellas.”

One day, after considering the restaurant’s sizable parking lot, Heather had an idea. “She said, ‘You know what’s going to come back?’” Ben recalls. “’The drive-in.’”

That was in mid-March. Sure enough, drive-in theaters — those relics of a bygone America — are now the hot new thing. From New York to Texas to California, they’re doing brisk business during a pandemic that has shuttered indoor theaters. One movie, “The Wretched,” an indie horror flick from the studio IFC, led the May 15 weekend with $85,000 by playing exclusively at drive-ins. And as states begin lifting their stay-at-home guidelines, nearly half the country’s 300 drive-ins are returning to operation or are on track to do so, according to John Vincent, president of the United Drive-In Theater Owners Association.

“We’re looking forward to everything going back to normal,” says Vincent. “And we’re happy to be among the first ones out of the gate.”

There are no drive-ins on Long Island, of course; the last one, in Westbury, closed in 1998. There are only a handful within relative driving distance, including the Hyde Park Drive-In, the Warwick Drive-In and Middletown’s Fair Oaks Drive-In.

Long Islanders, however, can still get the drive-in experience close to home. In the wake of Gov. Andrew Cuomo’s announcement that drive-ins would be allowed to reopen beginning May 15, plans for pop-up versions began percolating across Long Island. Movies in the Moonlight, a Laurel-based company that rents outdoor screening equipment, has been seeing an unprecedented level of inquiries according to owner Frank Zagarino. Already he has booked movie-nights for municipalities, country clubs, high schools, even private homes.

“There wasn’t five minutes yesterday when the phone didn’t stop,” Zagarino said on a recent afternoon. “In 13 years, I’ve never had that.”

Forget the old blowup movie screens that sat low on the ground and required a noisy generator to stay inflated, says Zagarino. Today’s screens come on metal frames that can be elevated up to eight feet in the air. Prices in the rental industry vary according to seasonality and demand, he says, but a basic setup — including a 25-foot screen, a projector and a 30-foot antenna for broadcasting audio to FM car radios — runs roughly $2,000 per night. Renting the movie might cost another $400 or so, though that price is determined by a separate company, Zagarino says.

So far, the pop-ups seem to be pulling in crowds. When the town of North Hempstead announced a new drive-in movie series beginning this month, reservations filled up within a day. Coopers Beach in Southampton Village will be the site of two drive-in movie programs this year: The annual series sponsored by the local chamber of commerce, which begins in late July, and a new series presented by the Southampton Arts Center that begins in May. Its first screening, of "Raiders of the Lost Ark," sold out even with tickets priced at $50 per car.

With indoor theaters low on the state’s list of businesses scheduled to reopen, drive-ins could be Long Island’s only moviegoing option for some time, says Southampton Village Mayor Jesse Warren. “It’s a fun activity and something we can all do safely.”

The towns of Sayville and Babylon, the Gold Coast Arts Center in Great Neck and the Coach Meeting House restaurant in Oyster Bay have all recently announced drive-in movie nights as well.

And remember the Freisers, at Beginnings restaurant? They’re teaming up with the village of Atlantic Beach to launch a regular drive-in event with two screens and room for roughly 150 cars. (The series is tentatively slated to begin later this month.) Freiser says his restaurant is planning to deliver meals to patrons’ car windows or — depending on safety concerns — leave them on the hood. He’s even considering putting his staff on roller-skates, “American Grafitti”-style.

“It’s nostalgic,” he says. “And it’s something where I think we’ll be filling a void.”

Meanwhile, real drive-ins will be facing financial pressure in a new era of social distancing, says Rick Cohen, owner of the Transit Drive-In in upstate Amherst. He expects summer business to be brisk but adds that capacity will be capped at 50% to allow for extra room between cars. What’s more, he’ll need additional staff to stand guard at the indoor snack bar and public restrooms to prevent crowding. That means half the usual ticket sales, but roughly 30% more labor costs, Cohen estimates.

“We can’t operate at a loss,” he says. “If we can’t be profitable, we’d be better off staying closed.”

The drive-in may be having its moment in the sun, says Vincent of the trade association, but don’t expect a rebirth of the industry. “There’s not going to be 4,000 drive-ins again,” he says. “That being said, there are some opportunities for us to fill in some holes. It would be my dream for everyone in the U.S. to go to a drive-in.”

REMEMBERING THE GLORY DAYS ON LI

Rick Geiger remembers the Johnny All-Weather Drive-In as a Copiague institution during his teenage years. It’s the place he saw the 1970 documentary “Woodstock,” he says, which was almost as good as actually attending the famous three-day music festival.

“We had a friend who worked at the theater, so we could come in through the back gate,” says Geiger, 67, a retired aerospace purchaser who now lives in Temecula, Calif. Sitting on the hoods of their cars, with several of the nearby speakers on posts cranked up to maximum volume, Geiger and his friends surreptitiously drank beers while watching concert footage of Jimi Hendrix, the Who and Jefferson Airplane on the large, outdoor screen.

“For five nights straight we had parties out there,” he says. “I would venture to say I watched way more movies in my car than I did in the theaters.”

Alas, the Johnny All-Weather – so named because it had an indoor screen as well – held its final season in 1984 and was replaced by a shopping plaza, according to Rick Cohen, who runs the website NewYorkDriveIns.com. Long Island once had something close to 20 drive-ins, says Cohen, who also owns the Transit Drive-In in upstate Amherst. A combination of rising property values and corporate consolidation (many were purchased by United Artists) began putting pressure on drive-ins during the 1970s and ‘80s, he says. On Long Island, the last holdout was the Westbury Drive-In, which closed in 1998.

Long Island mirrors the national trend, says John Vincent, president of the United Drive-In Theater Owners Association. Following the post-war flight to America’s suburbs and the accompanying baby-boom, drive-ins reached a high point of 4,063 venues nationwide in 1958, according to the association’s data. “That might have been oversaturation,” says Vincent.

“We’ve been doing extremely well, the drive-ins that are still left,” Cohen says. “As long as the weather’s good and the movies are good, we’re great.”— RAFER GUZMAN