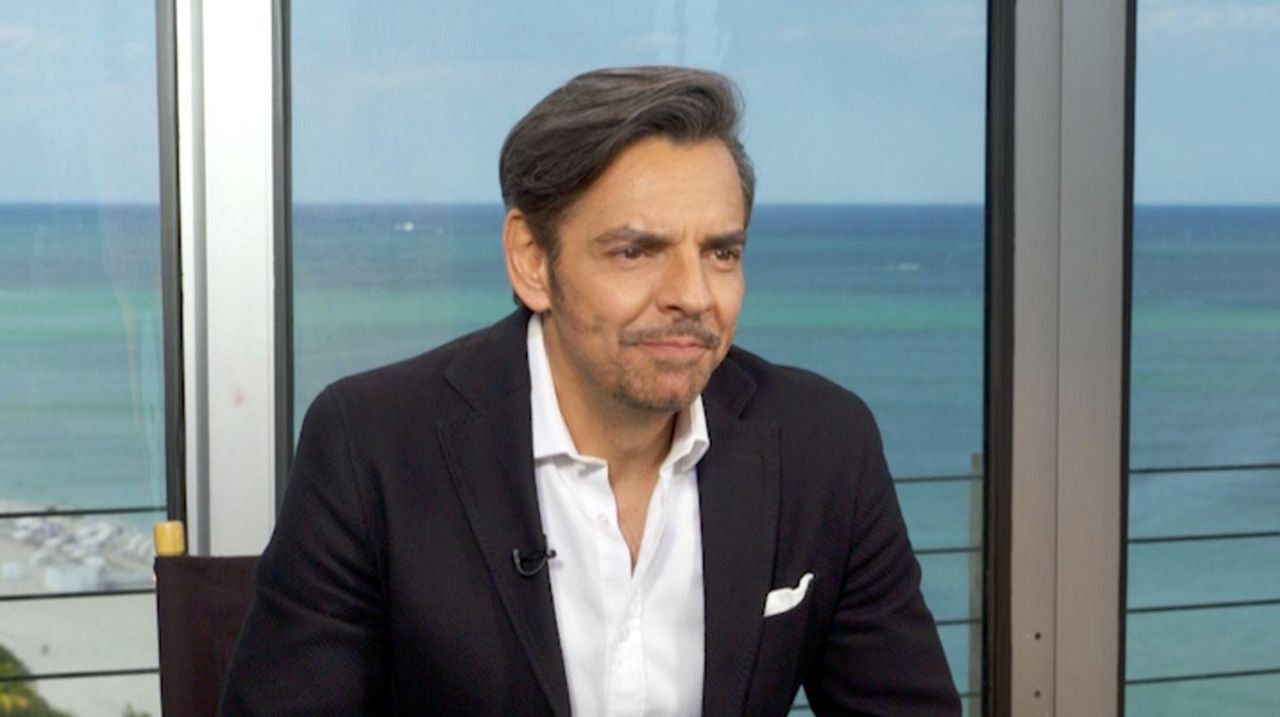 Eugenio Dervez, who stars as Maximo in the film "How to Be a Latin Lover," spoke with Newsday's Daysi Calavia-Robertson on Tuesday, April 25, 2017, about how much he enjoyed making the film and working with Salma Hayek. He also gave her tips on how anyone can be a Latin lover. Credit: Handout

Mexican comedy star Eugenio Derbez, who stars alongside Salma Hayek in “How to Be a Latin Lover” (opening April 28) says his on-set chemistry with the movie’s director, West Islip native Ken Marino, couldn’t have been more “perfect.”

Marino, who is also an actor (“We’re the Millers,” “Role Models”), did not appear in the film about Maximo (Derbez), a middle-aged gold digger who gets dumped by his rich, 80-year-old wife and is forced to move in with his estranged sister (Salma Hayek) while he pursues another wealthy widow (Raquel Welch).

He did, however, “do a hell of a job directing it,” said Derbez.

“He’s an actor, producer, director and writer, like me, so it was really easy to work with him, and he had such a great attitude, making jokes all the time,” said Derbez, whose 2013 film “Instructions Not Included” became the highest-grossing Spanish-language movie of all time.

“He’s also very talented. I mean he shot a three-hour movie and had to cut an hour because he got such great, amazing material. We could probably have made another movie with the extra footage.”

Derbez, 55, credits most of the film’s bloopers and laugh-out-loud moments to his rapport with personal friend Hayek, who he says he has “known for more than 30 years” even though they’ve never worked together previously.

“We’re both Virgos. We were born on the same day actually, on Sept. 2, but in different years,” he said. “She always insists on being clear about that,” he laughs.

Even so, for Derbez and Hayek, “How to Be a Latin Lover” marked their first time sharing the screen. And they just didn’t expect to have “so much chemistry.”

Derbez says shooting alongside Hayek felt “so natural,” but he especially remembers one scene in which they were hanging out in a living room getting drunk on shots of tequila.

“Well, the tequila was not real but it looks as if it were because we just had so much fun shooting it and couldn’t stop laughing.”

Hayek and Derbez are already planning to work together on future projects and don’t discount the possibility of a “How to Be a Latin Lover Part 2.”

“Listen, anyone can be a Latin lover,” assures Derbez. “It’s just a matter of attitude, of really being confident about yourself. You have to walk into a room feeling like you’re Brad Pitt, make strong eye contact and remember the power of a really good pickup line.”