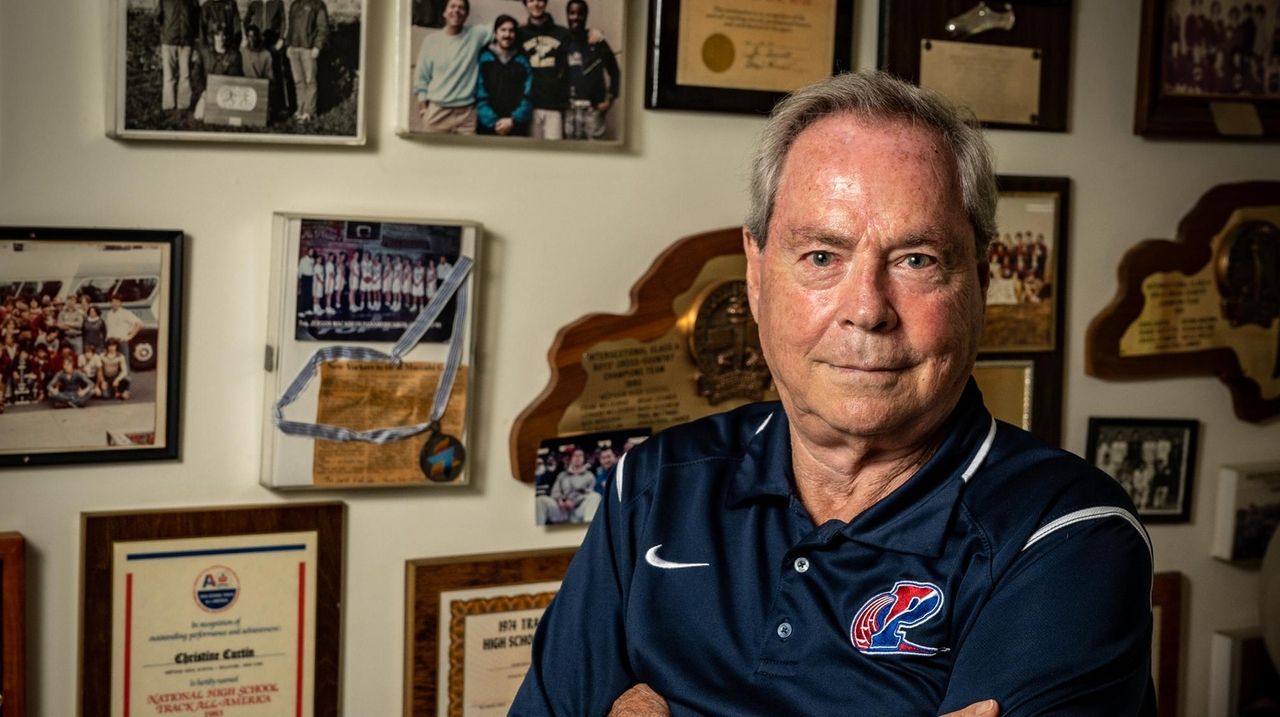 Paul Limmer, a former track coach at Wellington C. Mepham High School, wasn’t too keen on having a former student produce a documentary about him. Limmer sat for interviews and watched a few rough clips here and there, he said, but otherwise had little involvement. When the finished product, "The 5th Man," plays July 22 as the opening night selection at this year’s Stony Brook Film Festival, Limmer will be in the audience, watching the film for the first time.

"I really don’t like people making a fuss over me," Limmer, 78, said several days before the premiere. "People think I have a huge ego. I don’t." A pause — then a smile. "I do. But I never wanted to lord it over anybody."

"The 5th Man," produced by Dexter Braff — one of three Bellmore-raised brothers who attended Mepham High — paints a picture of Limmer as a coach who during a 35-year career helped his athletes achieve their best, both on the field and off. During his tenure at Mepham from 1962 to 1998, Limmer turned the school into a track and field powerhouse with at least 737 wins, according to the filmmakers. Limmer has two rooms in his house devoted to trophies, medals and plaques, but he seems best remembered for less quantifiable successes, such as giving lonely kids a sense of belonging, pushing them to improve their grades and offering support during a difficult time.

"He was always there for me," said Braff, who during his senior year in high school lost both parents — his mother to cancer, his father to a heart attack — on the same day. "I always knew he was there," Braff says of Limmer. "He was watching out for me as he was watching out for all his athletes. The role he played for me getting through that period of time, and the role he played for me as an athlete — that was really, really special."

Braff, 62, went on to form the Braff Group, a Pittsburgh-based firm that specializes in mergers and acquisitions for health care companies, and then began producing films on the side. Over the years, he said, he attended various dinners and galas in honor of his old coach but began to feel that the usual speeches and slide presentations weren’t doing Limmer justice.

"I was just looking at him and going, ‘This is a guy who should be in a film, something that will stay around,’" Braff said. "It was germinating in my mind, but I woke up one day and I said: You know what, Coach is not getting any younger. And I don’t want this to be an ‘in memoriam.’"

Braff approached Atlantic Pictures, a studio he had worked with in the past, and the studio brought in Texas-born director, Trey Nelson. Nelson said he was immediately drawn to Limmer during their first meeting in Sept. 2019. "He’s a coach, you know?" said Nelson, who played football in high school. "It’s not that you want to impress him, but you just want to do a good job for him."

During those early preproduction meetings, the filmmakers hit upon their theme of "the fifth man." In a cross country running team, only the top five runners who cross the finish line score points, which means any team — no matter how fast its first-place runner may be — is only as good as its fifth man. For a movie about a coach who valued effort and teamwork, "The 5th Man" seemed like a perfect title.

"It was a real documentary of discovery," said Nelson.

Limmer began his career at Mepham as a science teacher, though he had always had a love of track. When an opening as coach came open, Limmer took it despite a near-total lack of experience. He spent the first several years pushing kids too hard, he admitted, but his coaching improved when he took the unusual step of appointing one of his young runners, Steve Braff — Dexter’s brother — as the team’s manager. As one former Mepham athlete in the film puts it, "Unlike many teachers, the coach was teachable."

Limmer also had some good luck. He discovered Mark Belger, who became a record-breaking star and went on to place fourth in the 1976 U.S. Olympic Trials. In the 1980s, Limmer coached Christine Curtin, who racked up so many wins that she graced the cover of Ms magazine.

Curtin and Limmer didn’t always see eye to eye. Coaching girls was new to Limmer at the time, and Curtin still harbors some resentment at being overtrained. Still, she credits coach with giving her a life that may not have otherwise been possible. Her wins under Limmer earned her a full scholarship to Stanford, she said, but also instilled in her a confidence that she carries with her today.

"One of the most important things about his legacy was that he supported the development of the girls’ track team," said Curtin, 55, now a psychologist living in Mill Valley, Calif. "To excel and see what I could do, and begin to know myself in a different way as a powerful, growing young woman — that's been part of me my whole life."

Limmer says his coaching style probably would not sit well with school administrators today. Patting athletes on the butt, tossing out the occasional insult, even kindnesses like driving kids home after a late-night meet — none of it would fly, Limmer said. When another local high school asked him to take up coaching a few years ago, Limmer said he agreed but refused to change his old-school ways. That turned out to be a deal breaker. "I believe the end justifies the means," he said with a shrug.

Limmer still lives in the East Northport home he bought more than 40 years ago. He has taken up the unlikely hobby of breeding day lilies; his backyard contains hundreds of varieties, he said, including one — a pink-purple blossom with striking golden edges — named Sandra’s Smile, after his late wife. Limmer also remains active in athletics, serving as New York and Northeast regional manager for Nike’s track meets.

In many ways, Limmer’s coaching legacy surrounds him. Some of his doctors are his former runners, Limmer said, and so is his lawyer. Even his backyard fence was built by a company owned by the husband of a former runner.

"Pure selfishness," is how Limmer describes his coaching career. "I did it because it made me feel great when a kid was having a good time. When I could see the joy on a kid’s face — that’s what made me continue to do what I did all these years."

This year’s Stony Brook Film Festival will be held both in person and online. Here are a few selections from the festival’s 18 feature titles:

A wife’s need for a kidney transplant, and her husband’s discovery that he’s the perfect donor, serve as unlikely material for a comedy in the hands of director and co-writer Michael Kreihsl. In German with English subtitles.

In this survivalist thriller, a virus that causes a disconnect from reality – often with violent results -- begins spreading through the internet. Writer-director Paul Schuyler made the film using only himself and his family members (Jade, Quinn and Shaw) as cast and crew.

After writing a brutally honest memoir about her now-estranged family, a woman returns to her small town for her brother’s wedding, only to learn that he’s marrying her childhood nemesis. Lisa Jespersen directed and co-wrote this dark comedy starring Rosalinde Mynster (“A Royal Affair”) and Adam Ild Rohweder. In Danish with English subtitles.

As two brothers attempt to drive a car full of opioids from Florida to Alaska, an act of unexpected violence – and their tendency to dip into their own stash – threaten to derail their plans. Starring Scott Monahan, who directs, and Dakota Loesch, who wrote the screenplay.

In Iran, 12-year-old Ali and his friends enroll in the Sun School, a charitable institution that educates street kids. Their reason: The school might be sitting atop a buried treasure. In Persian with English subtitles.

At the age of 37, a once-promising tennis player sets his sights on the French Open. The closing-night selection features Alex Lutz and Kristin Scott Thomas. In French with English subtitles.

'Raymond' creator shopping reunion special
5:41
Biz Markie's best friend shares memories of the hip-hop artist
5:41
Two turntables and a microphone made Biz Markie a legend
Who's next? Jodie Whittaker to leave 'Doctor Who' in 2022
Margaret Cho joins cast of 'Fire Island' movie
7:26
The Buzz: Michael Bishop talks about 'Spin,' his upcoming Disney movie
Didn’t find what you were looking for?