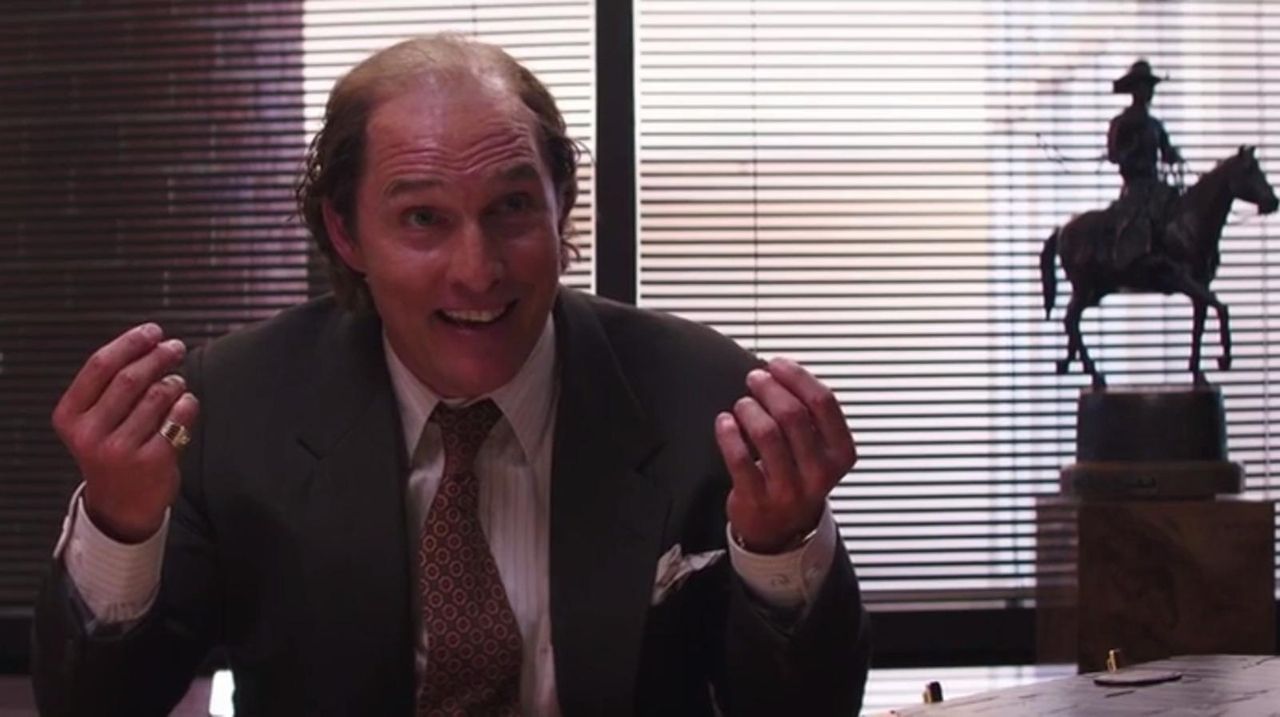 Matthew McConaughey plays a modern-day prospector who gambles everything on a mine in Indonesia. Credit: The Weinstein Company

PLOT A modern-day prospector gambles everything on an Indonesian gold mine.

The story of “Gold” begins with a vision of verdant jungle where treasure may lie miles below the surface. The time is the late 1980s and the X that marks the spot is in Indonesia, but “Gold” could easily have been set in Northern California circa 1849. It’s the story of a hardscrabble miner pitting his will against cruel Mother Nature and — even crueler — human nature.

Matthew McConaughey plays Kenny Wells, the nominal CEO of Washoe, a barely extant mining company run from a cocktail bar in Reno, Nevada. With thinned-out hair and extra flab, McConaughey cuts a memorable if odd figure as Wells, an unhealthy wreck who nevertheless thrums with ambition. Pawning some jewelry from his loyal girlfriend, Kay (Bryce Dallas Howard), Wells buys a plane ticket to Indonesia for a last-ditch meeting with the legendary miner Mike Acosta (an inscrutable Edgar Ramirez), who, like Wells believes that El Dorado lies somewhere in the jungle.

In the face of malaria, cash shortages and Suharto’s strong-arm government, Wells and Acosta prevail, striking a vein that could be worth billions. The question is whether they can keep it away from clever Wall Street brokers and the South African mining titan Mark Hancock (Bruce Greenwood), a possible stand-in for the De Beers conglomerate. Acosta keeps his cool during negotiations, but Wells refuses to give others credit for his discovery, even in exchange for virtually infinite wealth. “It was my dream,” he insists. “I dreamed it.”

Stephen Gaghan (“Syriana”) directs this densely packed drama with an eye for realism and rich detail (the dive bar is as vivid as the jungle), but the script, by Patrick Massett and John Zinman, veers unsteadily between fact, fiction and satire. A real mining scandal from the 1990s, involving the Canadian company Bre-X, is the inspiration for this story but not its basis. Maybe that’s why Wells in particular never comes fully into focus. Part hero, part rube, he feels modeled on someone real whose original shape has been lost.

The hipster-rock soundtrack (Pixies, orange juice and a new original song from Iggy Pop) seems oddly off-topic, but for all that, “Gold” mostly works. It’s just a few ounces shy of solid entertainment.