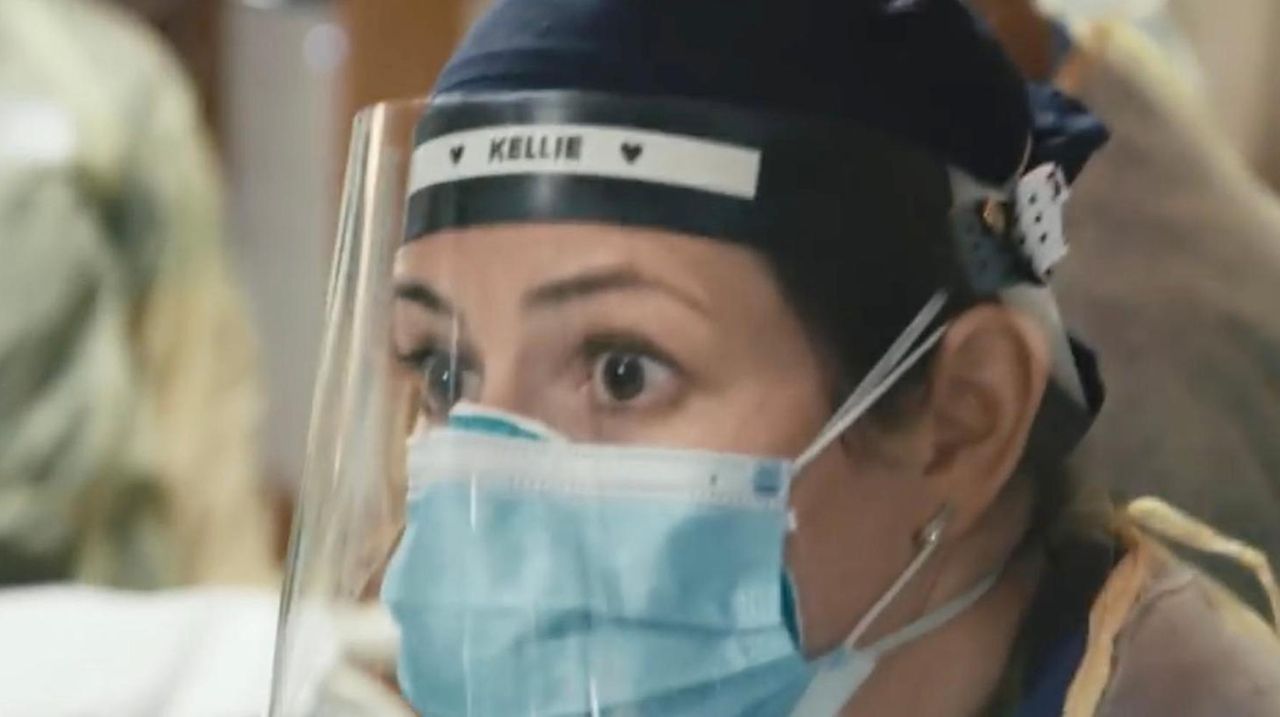 Trailer for 'The First Wave,' a documentary about the early days of the pandemic, set at Long Island Jewish Medical Center. It opens this year's Hamptons International Film Festival. Credit: National Geographic

An elderly patient struggling with COVID-19 at Long Island Jewish Medical Center begs to be put on a respirator in "The First Wave," a new documentary about the early onslaught of the pandemic. The patient, identified only as George, does not survive. Despite a round of CPR that briefly pulls him back from the brink, he somehow slips away.

The hospital staffers who tried to save him pause for a moment of silence. And then, overwhelmed by more incoming cases, they move on.

For those whose experience with the pandemic has been limited to daily headlines about case numbers and mortality rates, "The First Wave" should come as an eye-opener. Filmed from March through June 2020 in the corridors and intensive care units of LIJ — a medical complex that is based in Nassau County’s New Hyde Park and extends into Queens — the documentary, directed by Matthew Heineman, captures the anguish of patients, the helplessness of their loved ones and the raw emotions of health care workers. "The First Wave" will hold its world premiere Oct. 7 as the opening night selection of the Hamptons International Film Festival.

The film can be a difficult watch, but it’s also a necessary one, according to festival programmer David Nugent. "Sure, we could have had a light fluffy film. We have those later in the festival and I hope people go see them, because sometimes we need them," he said. "But I think it’s important to acknowledge what people have been through, and to honor the sacrifice and loss that happened."

Heineman, a New York City-based filmmaker who hails from Washington, D.C. and Connecticut, is probably best known for "Cartel Land," a 2015 documentary about the Mexican drug wars that earned him an Oscar nomination, and "The Trade," a five-part series about the opioid crisis that aired on Showtime in 2018. He also directed "A Private War," the 2018 biopic featuring Rosamund Pike as Marie Colvin, the Long Island-raised war correspondent who died covering the siege of Homs in Syria in 2012.

Heineman, 38, said he remembers the mood of uncertainty and dread as the pandemic began making its way from China to U.S. shores during the first months of 2020. "I obviously was curious and frightened by this mysterious disease," he said. "And as it started to first be discovered in New York, that’s when I started to figure out in earnest: Is there a film here and how can we make it?"

Heineman reached out to dozens of hospitals around the country and was given access by LIJ, which is part of the Northwell Health system. "We were living in what was the epicenter of the world’s impact of COVID-19 at the time," said Michael Goldberg, the medical center’s executive director. "The last time we went through something like this was in 1918. To capture what we see now as a historical perspective, maybe this can inform us to be much more well prepared in the future."

Using small film crews and sometimes acting as his own cameraman, Heineman found a wide range of stories but ended up focusing on a handful of individuals. One is Ahmed Ellis, a school safety officer with the New York Police Department who becomes so weakened by the disease that he later requires physical therapy just to sit up in bed. Another is Brussels Jabon, a nurse who becomes a COVID-19 patient while pregnant and will face an emergency C-section. (Goldberg said Heineman’s crew was accompanied by a guide at all times to ensure that safety protocols were followed and to protect the privacy of patients.)

What may surprise viewers is the intensity of the suffering. Many patients look half-dead, almost zombified. Others appear to be focusing every ounce of strength on their next breath. Ellis, asked by a staffer to make a thumbs-up sign, simply cannot do it.

"To see where I was and where I’m at now, it’s just a total 360," said Ellis, 36. He was brought to the hospital in an ambulance April 7, he said, and has no memory of his time there until a month later, when a friend dropped by and managed to rouse him from his fog. "It’s sort of sad watching it," Ellis said of seeing himself on film. "But I feel even better because I’m here to tell my story."

"The First Wave" also touches on the ways COVID-19 began to reflect racial disparities in America. Dr. Nathalie Dougé, an internal medicine physician at Northwell Health who is featured in the film, points out that most of her patients are Black and Hispanic, and many are immigrants. During late May 2020, following the death of George Floyd — a Black man killed by a white police officer who knelt on his neck — Heineman’s documentary shifts its focus to the ensuing protest marches. There, placards emblazoned with Floyd’s plea "I can’t breathe" seem to echo the words of countless COVID-19 patients.

"Most of the time people just see me as a black female. No one really knows what I do," said Dougé, who is Black. "Every time I saw a patient that kind of looked like me, I saw me and my family, and the constant struggle we go through to actually advocate for the care that we deserve." She added: "This pandemic let the whole world see. It took off the blinders of ignorance for people who don’t want to see what’s going on."

Amid the strife and loss seen in the film, however, are moments of optimism. New Yorkers bang pots and pans outside their windows to celebrate the efforts of health care workers, and in turn those workers give standing ovations to patients who manage to leave the hospital and return home.

"There were countless times when I and all of us got emotional," Heineman said. "Sometimes these relationships between patients and nurses and doctors were very quick, and sometimes they were built over weeks. The amount of love and care and dedication that these health care workers had for their patients — it was deeply inspiring and moving."

Along with its opening-night documentary on the pandemic, “The First Wave,” the Hamptons International Film Festival will screen titles ranging from comedies to dramas. Here are a few samples from the schedule:

PASSING (Friday, Oct. 8 at 8 p.m. at Sag Harbor Cinema, 90 Main St.) Rebecca Hall’s directorial debut tells the story of two Black women (Tessa Thompson and Ruth Negga) who could “pass” for white but choose to live on opposite sides of the color line during the Harlem Renaissance.

BELFAST (Saturday, Oct. 9 at 10:30 a.m. at Guild Hall) This drama about a boy whose life is disrupted by the politically-driven violence of Northern Ireland in the late 1960 was inspired by the childhood of writer-director Kenneth Branagh. With Jude Hill, Jamie Dornan, Caitríona Balfe and Judi Dench.

INTRODUCING, SELMA BLAIR (Saturday, Oct. 9 at 2 p.m. at Sag Harbor Cinema) A candid documentary on the 49-year-old actor (“Cruel Intentions” and “Hellboy”) who in 2018 announced that she has multiple sclerosis. Blair and director Rachel Fleit, of Stony Brook, are scheduled to attend the screening.

THE POWER OF THE DOG (Saturday, Oct. 9 at 1:30 p.m. at Guild Hall) Benedict Cumberbatch, Kirsten Dunst and Jesse Plemons star in a love triangle set among a Montana cattle-ranching family in the early 20th Century. Jane Campion, of “The Piano,” wrote and directed.

THE FRENCH DISPATCH (Oct. 11 at 7 p.m. at Guild Hall) Wes Anderson’s latest is an anthology of stories from a fictional magazine. The cast includes Bill Murray, Tilda Swinton and Timothee Chalamet.