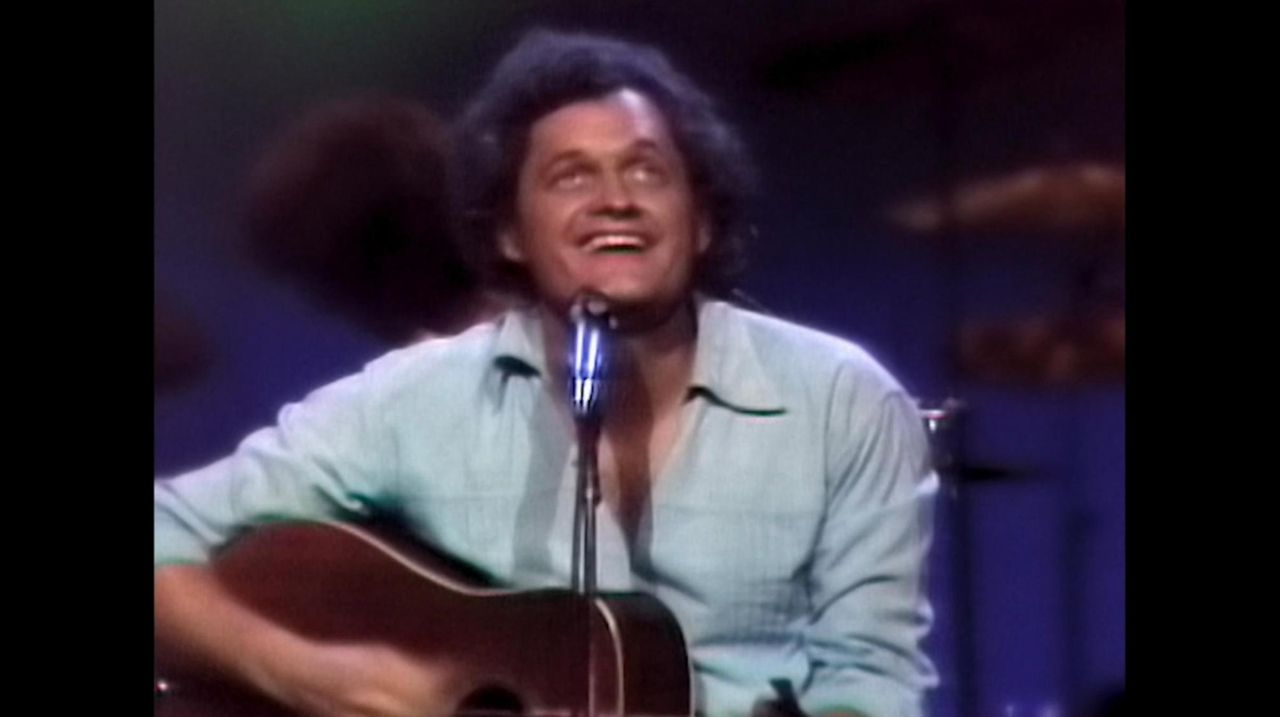 A new documentary called "Harry Chapin: When In Doubt, Do Something" will debut at the 2020 Hamptons International Film Festival and explores the life, music and activism of the legendary songwriter. Credit: Newsday; Courtesy of Greenwich Entertainment

A gaggle of teenagers surround a shaggy-haired folk singer in "Harry Chapin: When in Doubt, Do Something," a new documentary by Long Island filmmaker Rick Korn. The girls scream over Chapin, who is dressed in a brown blazer and wide-collared shirt, while the boys hover shyly nearby. Scribbling one of many autographs, Chapin cracks a self-deprecating joke: "My mother always told me it’d be like this."

It’s an improbable sight, all this youthful adulation over the man who wrote the 1974 folk-rock staple "Cat’s in the Cradle" and later devoted his life to eradicating world hunger — but writer-director Korn first became aware of Chapin in much the same way.

"Harry came jogging into our high school [Plainview-Old Bethpage John F. Kennedy] in the middle of the day and did a concert and talked about hunger and poverty for two hours. And then he stayed for another two hours with whoever wanted to stay," says Korn, 63, who grew up in Plainview and attended the local schools. "I will tell you, that was a defining moment in my life."

Depending on who you ask, Chapin, a longtime Huntington resident who died at age 38 in a car accident in 1981, was either a world-class pop artist who happened to be an influential activist, or the other way around. Chapin was a major star of his day, releasing a total of 11 albums and 14 charting singles. Later in his short life, Chapin helped found the global charity WhyHunger and the local organization Long Island Cares. "When in Doubt, Do Something," produced by Chapin’s widow, Sandy, and their son Jason, takes its title from a simple piece of advice that Chapin adopted as a personal motto. The film will hold its world premiere at the Hamptons International Film Festival virtually on Oct. 9 and at an Amagansett pop-up drive-in Oct. 10.

"What I like about the movie is that it shows both sides," says Chapin’s brother Tom Chapin, 75, of Piermont in Rockland County, also a musician. "He was a creature of enthusiasm, he needed something to get him up in the morning. His whole life was a search for the thing that really excited him."

Harry Chapin was born Dec. 7, 1942, and raised in Brooklyn, part of a creative-intellectual family. His maternal grandfather was the esteemed literary theorist Kenneth Burke, his uncle was the pioneering documentary filmmaker Richard Leacock and his father was a successful jazz drummer. During the folk revival of the 1950s and ‘60s, Chapin and his brothers Tom and Steve formed a group that saw some success.

It would be a while before Chapin pursued music seriously. According to Tom, Chapin worked for his filmmaking uncle during breaks from attending Cornell University (from which he never graduated), then took a job at a company that owned a large collection of boxing films. Chapin pitched the idea for a feature-length sports documentary that became 1968’s "Legendary Champions." That film, Chapin’s first, was nominated for an Oscar. It was around this time that Chapin married Sandy, who he’d met two years earlier as her guitar instructor.

By 1971, Harry had ditched film for music. He began playing in various New York City nightclubs and drew the attention of both Jac Holzman, co-founder of Elektra Records, and Clive Davis, then the President of Columbia Records. A bidding war erupted. Holtzman, interviewed in the film, describes flying to Huntington, knocking on Chapin’s door at 6 a.m. and refusing to leave without a deal.

Chapin’s debut album, "Heads & Tales" (1972), became a million-seller on the strength of "Taxi," a mournful song about a thwarted romance. "Taxi" helped establish Chapin as a musical storyteller, so much so that Billy Joel in the film good-naturedly complains that his own "Piano Man" was initially mistaken for a Chapin song. Chapin followed up with such tracks as "WOLD," about an aging disc jokey, and "Mr. Tanner," about an amateur singer who dares to perform in New York City. Many of Chapin’s song have a rueful quality and themes of regret, though by all accounts Chapin seized just about every day.

"Sometimes people would ask if he was ever down. Well, he wasn’t," says Sandy, who now lives in Ossining. "He put his feelings into his songs. Not into his life."

It was the 1974 hit "Cat’s in the Cradle," the story of a workaholic father who finds time for his young son only to realize he’s grown and gone, that turned Chapin into a household name. With its simple lyrical structure, poignant melody and O. Henry-ish twist, "Cat’s in the Cradle" became an FM radio classic and a guaranteed tear-jerker. Though Chapin often said the song was inspired by his son Josh — who in the film fondly calls that story a "shtick" — it was in fact based on a poem written by Sandy many years earlier. (She is credited as a co-writer.)

Jason, a Chappaqua resident, who is Sandy’s son from her previous husband, says Chapin was a highly attentive father who made the most of his downtime between touring. "He was a doer. We were always playing sports or making things or going to ballgames," says Jason, 56. "He wanted to make sure he was a big part of our life."

The second half of Korn’s film is devoted to Chapin’s turn toward activism, which began when he met Bill Ayres, then a Catholic priest (first in Rockville Centre and later in Seaford) who also had a radio show called "On This Rock," in which he spoke to musicians about spirituality and social values. Chapin and Ayres founded WhyHunger in 1975, and Chapin spent increasing amounts of time in Washington to help form the Presidential Commission on World Hunger in 1977. Chapin devoted so much energy to fundraising and benefit concerts that his musical career began to suffer. According to Sandy, her husband seriously considered going into politics.

"He was building a mailing list at his concerts, collecting names and addresses," says Sandy. "We had meetings at our breakfast table about what it would be like."

Around 12:30 p.m. on July 16, 1981, Chapin was on his way to a benefit concert at Eisenhower Park in East Meadow when his Volkswagen Rabbit collided with a truck on the Long Island Expressway, just outside Jericho. He was helicoptered to the nearby Nassau County Medical Center but pronounced dead a few minutes after 1 p.m. Chapin is buried in the Huntington Rural Cemetery.

Chapin’s manager, Ken Kragen, continued the singer’s legacy by launching the anti-hunger projects USA for Africa, which spawned the 1985 megahit "We Are the World," and Hands Across America, the 1986 event that attempted to create an unbroken chain of people from coast to coast. Sandy would form the Harry Chapin Foundation with an initial donation from Elektra Records.

"When we lost him, we lost a real powerhouse," Tom says of his late brother. "He wanted to matter. You live a life, you look back on it and the question is: What did you do?"

The Hamptons International Film Festival runs Oct. 8-14 with limited pop-up drive-in screenings in East Hampton and Amagansett, though all films will be offered virtually as well. For the full lineup go to hamptonsfilmfest.org, but here’s a quick sample of what’s playing and where:

WITH DRAWN ARMS (Thursday at 7 p.m. at East Hampton and Amagansett) Produced by John Legend, this documentary recalls the galvanizing moment at the 1968 Olympics when two American athletes dared to raise their fists in a Black Power salute.

AMMONITE (Friday at 7 p.m. at Amagansett) Kate Winslet plays a 19th-century paleontologist who begins a relationship with a grieving young woman (Saoirse Ronan). Written and directed by Francis Lee (“God’s Own Country”).

THE TRUFFLE HUNTERS (Friday at 7 p.m. at East Hampton) The second documentary from Bellmore-raised artist-filmmaker Michael Dweck (“The Last Race”) focuses on a group of Italian men devoted to finding the elusive and rare white Alba truffle.

THE FATHER (Saturday at 7 p.m. at East Hampton) A dutiful daughter (Olivia Colman) struggles to take care of her feisty father (Anthony Hopkins) as his memory begins slipping away. Directed and cowritten by Florian Zeller.

I AM A TOWN (Oct. 11 at 7 p.m. at Amagansett) A documentary about the remote fishing town of Provincetown, MA, directed by Mischa Richter, whose family has lived there for 100 years.

NINE DAYS (Oct. 12 at 7 p.m. at East Hampton) Edson Oda’s feature takes place in a metaphysical realm where Will (Winston Duke) must choose a soul who will be born again.

ONE NIGHT IN MIAMI (Oct. 12 at 7 p.m. at Amagansett) Regina King makes her feature film directing debut with the fictionalized story of four Black icons who gather for a celebratory evening in 1964. With Eli Goree as Cassius Clay, Kingsley Ben-Adir as Malcom X, Aldis Hodge as Jim Brown and Leslie Odom, Jr., as Sam Cooke. — RAFER GUZMAN

LI 'Survivor' contestant will be back next week
Live audiences again taking their seats at local production studios
LI singer eliminated on 'The Voice'
Wendy Williams off her show through at least Nov. 8
Fox's LI-set comedy premiering in January
Chappelle critics, supporters square off at Netflix as staffers walk out
Didn’t find what you were looking for?