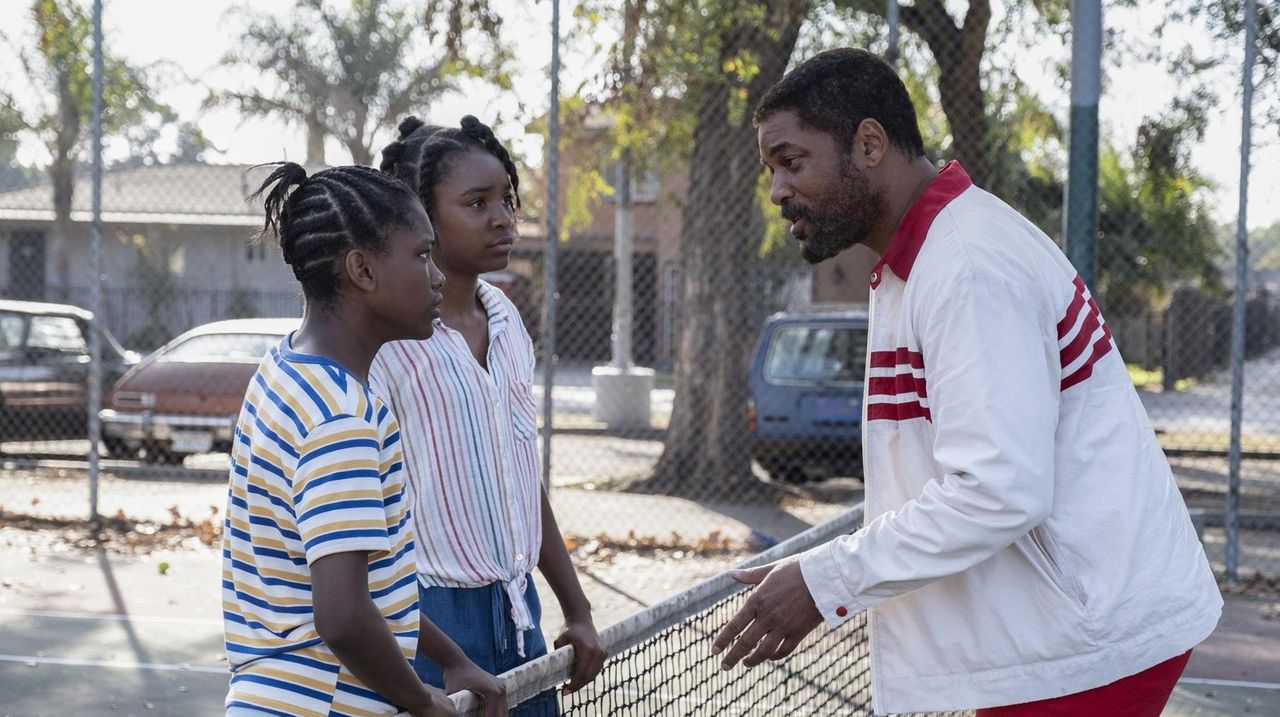 "King Richard," "Being the Ricardos," "Nightmare Alley" and "The Tender Bar" are four movies coming out this holiday season. Newsday's film critic Rafer Guzmán has the previews. Credit: Newsday

If you want to be among the first to see the new Western that might win the Oscar for Best Picture, or the Shakespeare adaptation that could earn Denzel Washington his third Academy Award, you’ll have to venture out to a cinema.

Or, if you wait a couple of weeks, those movies will come to you.

Welcome to another semi-streaming awards season. In the face of a stubborn pandemic, studios remain unconvinced that moviegoers will flock to theaters to see this year’s Oscar-worthy movies. After all, ticket sales have been painfully slow to recover from COVID-19, reaching near-normal levels only in October. By contrast, the streaming service Netflix reported that it beat expectations by adding 4.3 million subscribers in the third quarter of the year.

So, the studios are splitting the difference, releasing some of their biggest titles in theaters for a short time before making them available at home. "The Power of the Dog," a dark Western that could win Best Picture (and Best Director for Jane Campion) arrived in theaters Nov. 17 but will bow on Netflix Dec. 1. "The Tragedy of Macbeth," with Washington in the title role, debuts in theaters Christmas Day but comes to Apple TV+ Jan. 14. As for "King Richard," starring Oscar front-runner Will Smith as the father of tennis champions Venus and Serena Williams, it will premiere in theaters and on HBO Max the same day, Nov. 19.

The choice is yours. Here are 23 big titles coming your way:

THE POWER OF THE DOG On a Montana cattle ranch, tensions build between two brothers (Benedict Cumberbatch and Jesse Plemons), a widow (Kirsten Dunst) and her sensitive son (Kodi Smit-McPhee). Directed by Jane Campion ("The Piano"). Streams Dec. 1 on Netflix.

GHOSTBUSTERS: AFTERLIFE A next-gen addition to the comedy franchise, starring Finn Wolfhard, Mckenna Grace and Paul Rudd (plus several familiar faces). Directed by Jason Reitman and produced by his father, Ivan Reitman, who helmed the 1984 original.

ENCANTO An animated Disney musical about the Madrigals, a family with special powers living in the mountains of Colombia. With original songs by Lin-Manuel Miranda.

WOLF A boy who believes he is a wolf (George MacKay) is sent to a clinic where he meets a mysterious girl named Wildcat (Lily-Rose Depp). Written and directed by Nathalie Biancheri ("Nocturnal").

FLEE An animated documentary about Amin Nawabi, a refugee from Afghanistan who for 20 years has been keeping a painful secret. It’s Denmark’s official Oscar entry.

BEING THE RICARDOS Nicole Kidman and Javier Bardem play Lucille Ball and Desi Arnaz in Aaron Sorkin’s drama about a turbulent week in the making of "I Love Lucy." It arrives on Amazon Prime Video Dec. 21.

DON’T LOOK UP Two astronomers (Jennifer Lawrence and Leonardo DiCaprio) sound the alarm about a comet hurtling toward Earth — only to find that nobody cares. The latest from Adam McKay ("The Big Short") also features Meryl Streep, Jonah Hill and Cate Blanchett. It’s on Netflix Dec. 24.

THE TENDER BAR George Clooney directs this drama about a fatherless boy who finds a second home in the Manhasset pub Dickens (now Publicans). Based on J.R. Moehringer’s memoir. With Ben Affleck and Tye Sheridan. It arrives on Amazon Prime Video Jan. 7.

THE MATRIX RESURRECTIONS Keanu Reeves returns as hacker-turned-messiah Neo in a sequel to the iconic sci-fi franchise of the 1990s. Carrie-Anne Moss also returns. Of the writing-directing Wachowski siblings, however, only Lana is involved.

SING 2 Bono makes his animated film debut in this sequel about musical animals who put on a show. With the voices of Matthew McConaughey, Reese Witherspoon and Scarlett Johansson.

PARALLEL MOTHERS Two women (Milena Smit and possible Oscar contender Penélope Cruz) meet in a hospital room where they are about to give birth. Written and directed by Pedro Almodóvar.

THE TRAGEDY OF MACBETH Denzel Washington and Frances McDormand star in Joel Coen’s take on the Scottish play. It comes to Apple TV+ Jan. 14.

AMERICAN UNDERDOG The story of Kurt Warner (Zachary Levi), who went from grocery-store stock boy to Hall of Fame quarterback. With Anna Paquin and Dennis Quaid.

A JOURNAL FOR JORDAN The true story of a soldier in Iraq who kept a journal of fatherly advice for his infant son. Starring Michael B. Jordan and directed by Denzel Washington.

CYRANO Peter Dinklage plays the title role in a new adaptation of the 19th-Century play about love and lookism. Haley Bennett is his Roxanne. Joe Wright, of "Atonement," directs.