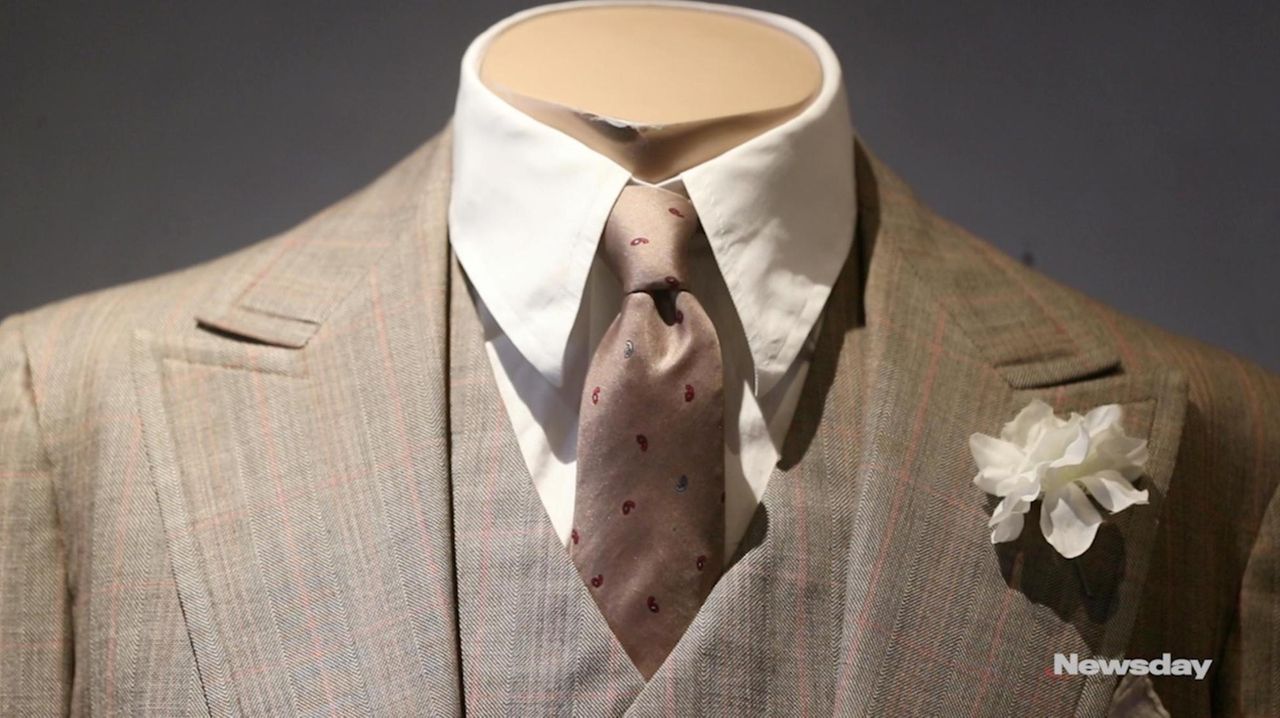 A total of 48 iconic Hollywood costumes from Audrey Hepburn's black and white gown in "My Fair Lady" to Vivien Leigh's curtain dress from "Gone With the Wind" are on display at Tanger Outlets in Riverhead. Credit: Randee Daddona

Prepare to be dazzled by the 48 dresses, gowns and suits worn by Elizabeth Taylor, Clark Gable and Charlton Heston, along with stories, photographs and a sense of the glamour and star power of classic Hollywood. John Wayne’s outfit from “True Grit” is on view, along with the shimmery gold gown Grace Kelly wore at the masquerade in “To Catch a Thief,” Vivien Leigh’s unforgettable curtain dress from “Gone With the Wind,” and dozens more.

“I was completely blown away,” says Middle Island’s Vera DiLeo, 78, who went to the exhibit with her husband, John, 80. Both are avid movie buffs, who heard about the exhibit from friends, and soon were telling others to see it. “I felt that I was being connected to the magic of old Hollywood by looking. I’m going to cry,” she says, chuckling. “I’ve been to exhibits before. They’re all behind glass, and you’re in a line and you don’t have time to stop. Here, they were close enough to touch.”

For John DiLeo, Tyrone Power’s matador costume from “Blood and Sand” was a highlight. But one costume appears to be the star of the collection.

“The white and black one, that seems to be everyone’s favorite,” Gene London, 87, says of the iconic dress Audrey Hepburn wore to the Ascot races in “My Fair Lady.” The genial former television show host and owner of the costumes on display (and many more) combines an encyclopedic knowledge of movies with a delight in dishing on stars. Ever since his first purchase, a group of costumes and memorabilia sold by MGM in the ’70s, London has been collecting and exhibiting his treasures. He spoke with visitors at the opening and will return to Tanger Outlets on April 13 and 14 for presentations at noon and 4 p.m. and appraisals at 5. Spend a few minutes with him and you’re likely to find out that Mae West had dresses made taller than she actually was and that she stood on a box to pose. London tells how John Wayne wore 3-inch lifts inside his boots, and that Bette Davis shaved half her head to play Queen Elizabeth I. Costumes worn by all three are on display.

Another highlight is a replica of Marilyn Monroe’s famous white dress from “The Seven Year Itch” (made for Sarah Jessica Parker), complete with air blowing the billowing skirt upward. Lots of visitors stop to take selfies. Accompanying the costumes are storyboards explaining who wore the outfit and often who designed it. It’s a who’s who of Hollywood greats, with clothes worn by Fred Astaire, Ginger Rogers, Judy Garland, Sean Connery and Joan Crawford.

Tanger Outlets’ general manager Lesley Anthony, who cites Leigh’s red “Gone With the Wind” dress as her favorite, found out about the exhibition and arranged for it to come from a museum in Texas to Riverhead. “It was the perfect fit, because it highlights fashion and different changing fashion times,” she says.

According to Amy Greco, Tanger’s assistant manager, more than 1,000 people attended the opening. “They were thrilled to meet [London], listen to stories, and they had stories of their own,” she says.

“It’s a win-win all around,” says London. “For me, it’s the thrill of steaming a dress and smelling the perfume of a star. The thrill of owning a piece of history … sitting with the audience, talking about stars and the movies and the magic of Hollywood, creating a dream that we all need in life.”