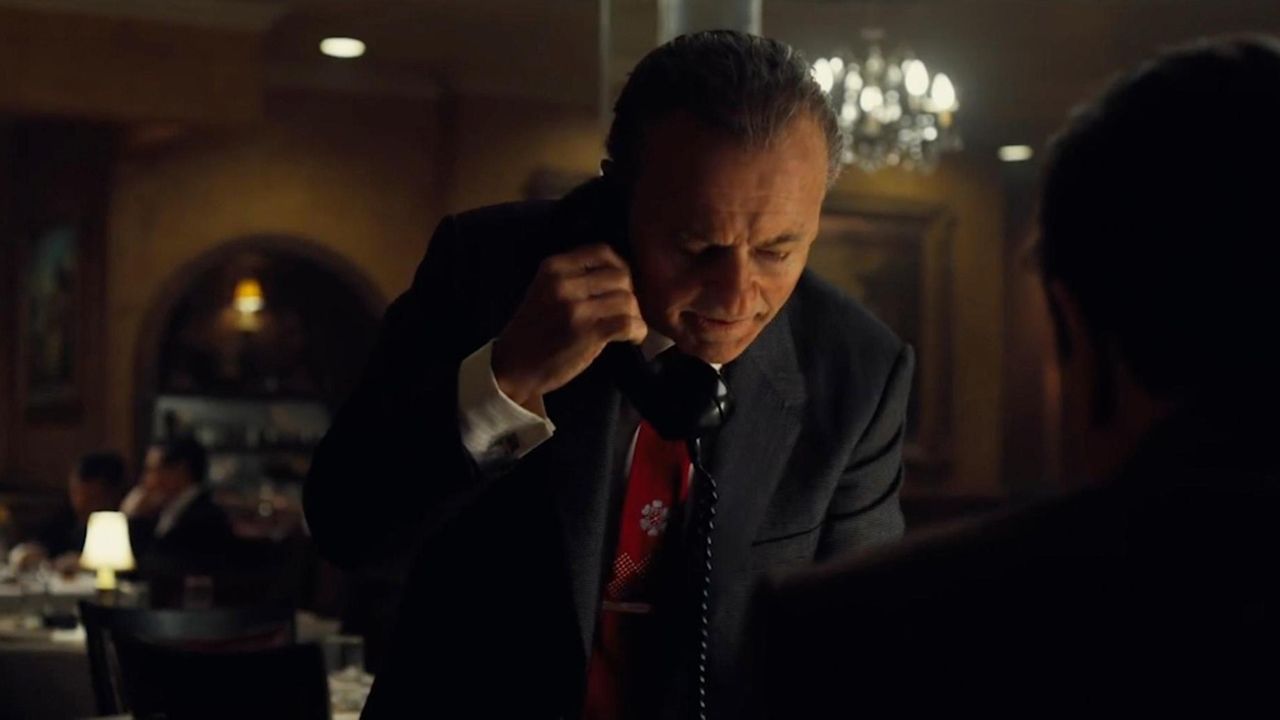 A teaser trailer released Wednesday for Martin Scorsese's period crime drama "The Irishman" displays at least one of the movie's many Long Island locations.

The two-minute trailer for the fact-based film about mob hit man Frank Sheeran (Robert De Niro), who allegedly was involved in the 1975 disappearance of Teamsters chief Jimmy Hoffa (Al Pacino), opens around 1960 at an Italian restaurant. There Russell Bufalino (Joe Pesci), a Scranton, Pennsylvania, crime boss, puts Sheeran on the phone with Hoffa.

The point of the call becomes clear moments later, as Hoffa tells Sheeran, "I heard you paint houses" — code for contract killings, and the title of Charles Brandt's 2004 book on which the film is based. "Yes, I do, sir," Sheeran replies. Illustrating this, moments earlier, is a flash-forward to Umberto's Clam House in Little Italy in 1972, where we see a version of the infamous murder of mobster Joe Gallo, for which the late Sheeran claimed, despite witnesses, to have been the sole gunman.

At not quite one minute in, a scene takes place at a concrete plant — the Seville Central Mix Corp. in Lawrence — as Hoffa in voice-over describes a situation where "big business and the government, they're trying to pull us down."

As Bufalino in voice-over tells someone, "You can't miss the big picture," we see Sheeran and his wife (Anna Paquin) watching the John F. Kennedy funeral on a black-and-white TV set in 1963, then pandemonium at the assassination of Robert Kennedy at a campaign rally in 1968, as we hear the famous cry of a radio reporter yelling of the killer, "Get the gun out of his hand!"

A brief shot shows a prop plane near a shoreline that appears to be on Long Island. The film's locations included Brookhaven Calabro Airport in Shirley.

Among other locales shot for the movie are the Mineola restaurant Biscuits & Barbeque, the former Pathmark building on Grand Avenue in Baldwin, and the Rodeway Inn in Huntington Station, made up to look like the Howard Johnson it had been in the 1970s. In October 2017, the production blew up a boat in Hempstead Harbor — doubling for the Detroit River — at the Harry Tappen Marina on Shore Road in Glenwood Landing.

The film, which also stars Harvey Keitel, Ray Romano, Bobby Cannavale and Jesse Plemons, opens the 57th New York Film Festival on Sept. 27. It will play in limited theatrical release and on Netflix this fall.