“This is so amazing,” shouted Gadot looking out at the crowd. “You keep thanking us for being here but you are the reason we are making these films. I want to thank all of you back!”

Fans cheered as it was clear Wonder Woman was their favorite DC character. Gadot, 32, discussed how she connects with her character.

“Diana [Prince/Wonder Woman] has superpowers, but she also has the heart of a human,” Gadot said. “That’s what makes her special. She really cares about people. I love that about her.”

Fisher, 30, explained that all of their characters start from very deep beginnings.

“Each one has their specific trauma,” he said. “What makes them special is the way they take that trauma and turn it into something positive.”

When Cavill, 34, asked the crowd by round of applause who would win in a throwdown, the Avengers or the Justice League, the results were overwhelming for the heroes in front of them.

“I’m fairly certain Wonder Woman and Superman would probably take 90 percent of them out,” Fisher said. “We’d be cheerleading on the sidelines.”

Momoa shouted, “I’d like to get tossed around by the Hulk!” 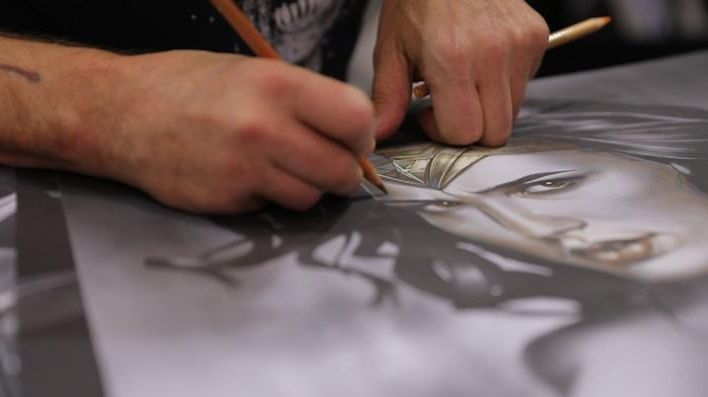 The question arose on whom the actors would like to use Wonder Woman’s magic lasso, which makes whoever it’s wrapped around tell the truth. Momoa, 38, wasted no time saying, “I’d throw that lasso around [President Donald] Trump!”

The panel concluded after Cavill explained from where he feels the mass popularity of superheroes stems.

“We associate with them in the most natural way because we see ourselves in them,” Cavill said. “That’s the beauty about it. I try to emulate Superman as much as possible.”

Friends Danielle Alesi and Jenna Gallante, both 25 and from Levittown, chipped in to get a photo with Momoa.

“Oh my God, I love him,” Alesi said. “He’s such a nice guy and he really looks like a warrior.”

Gallante added, “My mind kind of paused. I was in this realm of time that stopped me in my tracks. I almost passed out.”