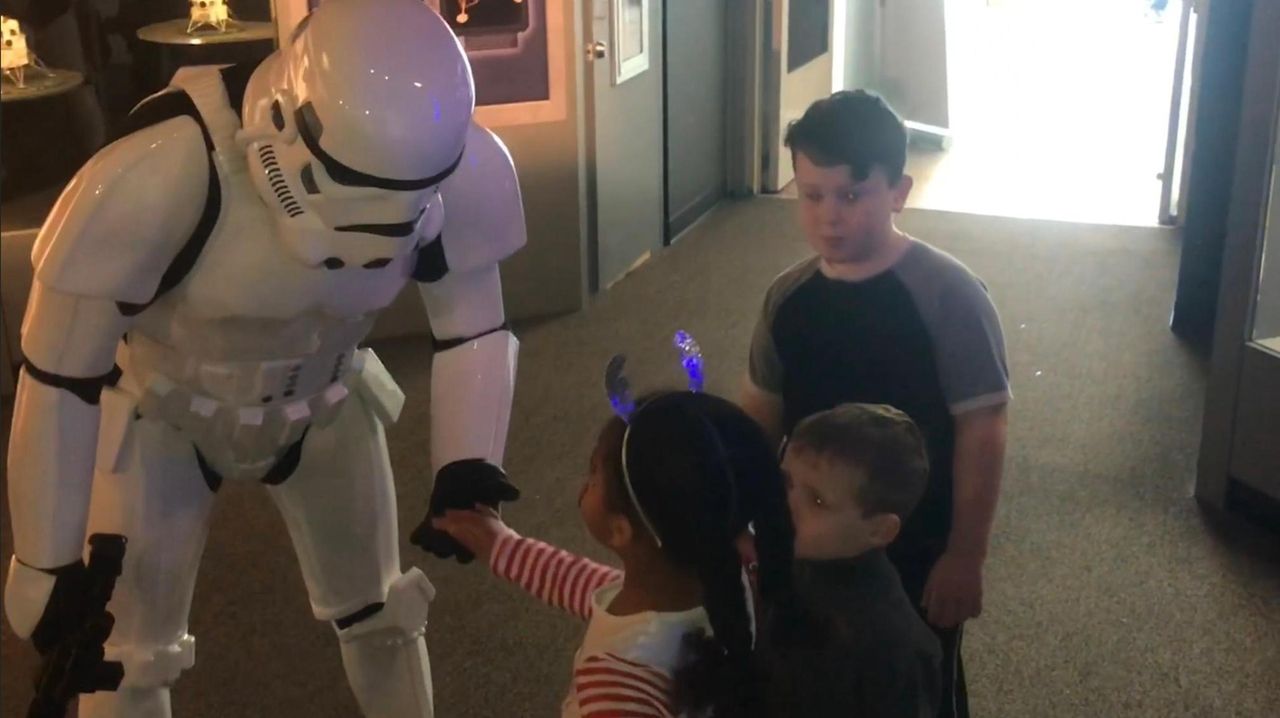 More than 35 costumed “Star Wars” characters invaded the lobby of the Cradle of Aviation on Nov. 30 for the 30th annual “Festival of Trees,” benefiting the Cerebral Palsy Association of Nassau County. Credit: Newsday / David Criblez

“We live vicariously through the kids who see us,” says Chris Feehan, a member of the 501st Legion Empire City Garrison who dresses up as various characters such a Stormtrooper, an Imperial Gunner or The Emperor. “When they look at us, they don’t see people in costumes they see those characters from the movies.”

Here are five Long Islanders, who eagerly await the new film, “Star Wars: Episode IX — The Rise of Skywalker," that portray characters from “a galaxy far, far away”:

Liefke made his new costume debut for 0-0-0 at the Festival of Trees after building it by hand for seven months.

“I 3-D printed it, sanded it smooth and painted it,” he says. “He looks like C-3PO except black with red eyes. He’s a Darkside droid that specializes in torture.”

Rey is the hero of the current “Star Wars” films and serves as an inspiration for Cheri Nowak.

“Originally Princess Leia was all we had,” she says. “Now with Rey using the lightsaber and being such a big part of the new movies makes it extra special.”

The big question everyone is waiting to be answered...is Rey a Skywalker?

Mantello wanted to be a Stormtrooper since he was a little kid when he saved up his money to buy a Stormtrooper mask for $50. Today he has upped the ante by building his own full bodied Stormtrooper suit for $2,000 complete with a voice simulator inside his helmet.

“Seeing Darth Vader and the Stormtroopers always has the biggest impact on people,” he says proudly showing off his costume. “Sometimes they will just stare and look at the details of the costume. It’s inspiring.”

Members of the Saber Guild create their own original characters within the “Star Wars” universe and Butterworth portrays Awyna Matsuko, a Jedi healer who was discovered on Naboo.

“When I get into character, I separate myself to become her,” says Butterworth, who helps teach Padawan training for kids with toy lightsabers. “It’s like being a rock star for an afternoon.”

Trowbridge was immediately drawn to the TIE Pilot character simply because of the look.

“The costume is cool because it sticks out with the black mask and hoses,” he admits. “It’s fun because we give out trading cards that kids can collect as they meet us. Playing these characters is like re-experiencing your childhood and kids approach you with so much excitement in their eyes.”