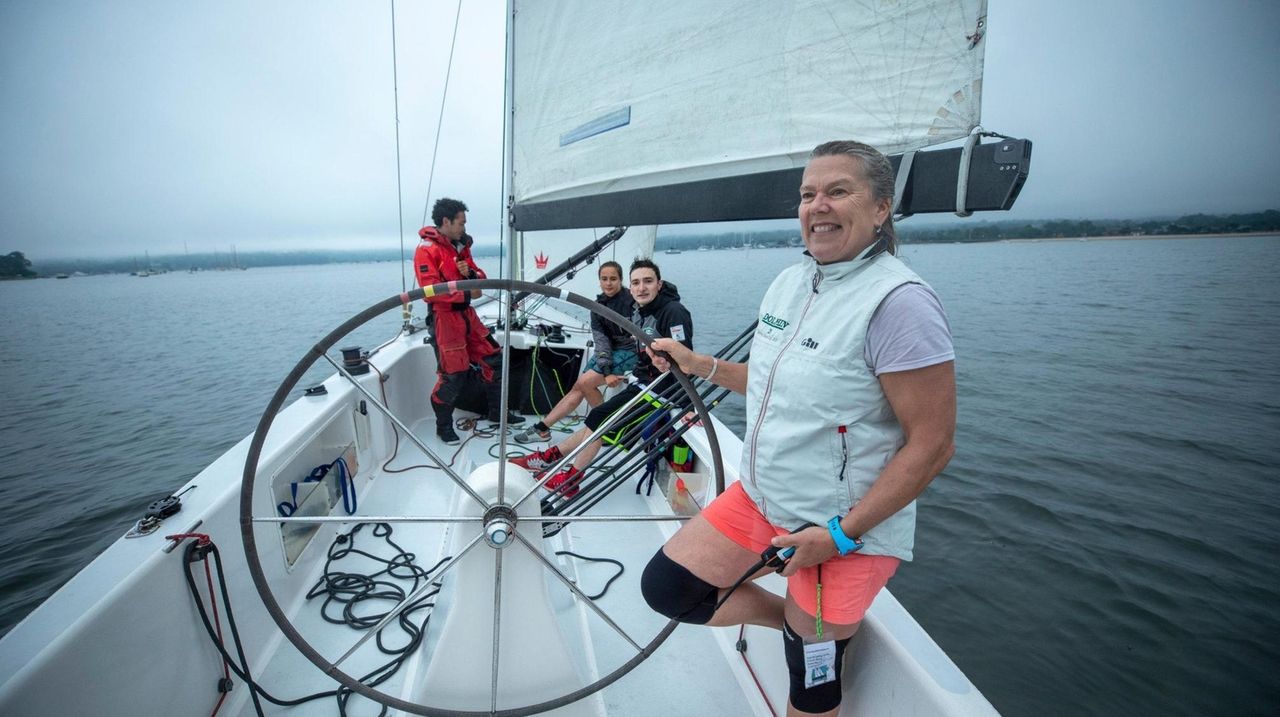 On Tuesday, June 18, we went sailing with Dawn Riley, a member of the first all-female crew in the Whitbread Round the World Race, a grueling yachting competition that covers 33,000 miles and lasts nine months. It's the subject of the documentary "Maiden." Credit: Newsday / Yeong-Ung Yang, Obi Chukwuma

Dawn Riley, a member of the first all-female sailing crew to compete in the Whitbread Round the World Race, still remembers the victories and defeats of that history-making race in 1989-1990. Riley also remembers the things that made her mad, like the so-called Beefeater girls.

Representing the well-known gin, the Beefeater girls were attractive women in flirty attire who were dispatched to greet the Whitbread racing boats as they came into port. The boats had been traditionally staffed by men, until Riley and her crew arrived in Fremantle, Australia, handily winning the second leg of the race. Riley, who lives in Bayville, still recalls feeling ticked off (she uses a saltier expression) by the dolled-up welcoming committee.

"So I said something," Riley recalls. "And by the time we got to Auckland, they had Beefeater boys for us."

It was a small victory in the much larger one that is documented in "Maiden," Alex Holmes' film about pioneering skipper Tracy Edwards and her all-woman crew. Taking its title from Edwards' cleverly named yacht, “Maiden” is a classic underdog story with a contemporary message of gender parity. The film opened in limited release June 28 to strong reviews, and arrives on Long Island July 12. Riley, who appears in the film and now serves as executive director of Oakcliff Sailing, a not-for-profit training center in Oyster Bay, will speak that evening at a screening at Huntington's Cinema Arts Centre.

Holmes, a British director, writer and producer who has worked mostly in television (his credits include the 2004 documentary "Dunkirk" and an adaptation of "The Other Boleyn Girl" for the BBC), first heard of Edwards five years ago. His daughter was graduating from elementary school in London, and Edwards was to serve as a speaker. Holmes admits he wasn't expecting much from the event.

“I went in without high hopes,” says Holmes, speaking by phone late last month. “This wasn't my first child, and I'd been to several of these things before. They generally involve some not-great singing and lots of applause.”

Instead, Holmes says, he and the audience sat transfixed by Edwards' story. “I watched children hanging on the edge of their seats, and the grown-ups, too,” Holmes says. Speaking with Edwards, he was surprised to find her story had never been made into a film. The two agreed to collaborate, though Holmes assumed no footage of such an arduous journey could exist and therefore envisioned making a dramatic feature. Then came another surprise: Edwards' longtime friend Joanna Gooding, who served as the ship's cook, also served as official videographer.

A SEA OF CHAUVINISM

“Maiden” describes a chauvinistic world of professional sailing in which women are largely decorative. Forget unequal pay: As Edwards tells it, they were virtually banned from racing altogether. The men's no-can-do mindset was so pervasive that it seemed to infect the women as well. In the film, a young Edwards vociferously denies that she's a feminist (“I hate that word,” she tells a reporter) while Riley initially pooh-poohed the whole Maiden concept when she first heard of it.

Nevertheless, Riley, a Michigan native and an experienced sailor who began her first yearlong ocean voyage at the age of 13, flew to England and tried out for Edwards' team. She impressed them with her skills, though another incident may have also earned her a spot on the boat. An American accustomed to big spaces, Riley says that on her first night in England she yawned and stretched — and accidentally punched a hole in the ceiling of her room.

Riley would go on to serve as watch captain, diver and engineer on Maiden. The boat began the race as a cute human-interest story in the media, but, thanks to its impressive performance leg after leg, it soon made headlines of its own. "One of the cool things about that race," Riley says, "is that we were changing the minds of many, many people. We were 12 pretty kick-ass women just racing around the world as a team."

Afterward, Riley raced in four America's Cup campaigns and two more Whitbreads (now called the Volvo Ocean Race). She joined Oakcliff 10 years ago. Yet despite her accomplishments, she says, sexism still exists in the sailing world. Men still dominate the top tiers of the sport, and they tend to own the boats and pay the bills, too, she says.

"You have to do everything that the guys do, and you have to know that you have the power to stand up for yourself," Riley says she tells the young women who arrive for instruction at Oakcliff. "You don’t have to be a jerk about it, but fight. Don't accept that discrimination is going to control you. Even when it does."

WHAT "Maiden" screening with appearance by Dawn Riley