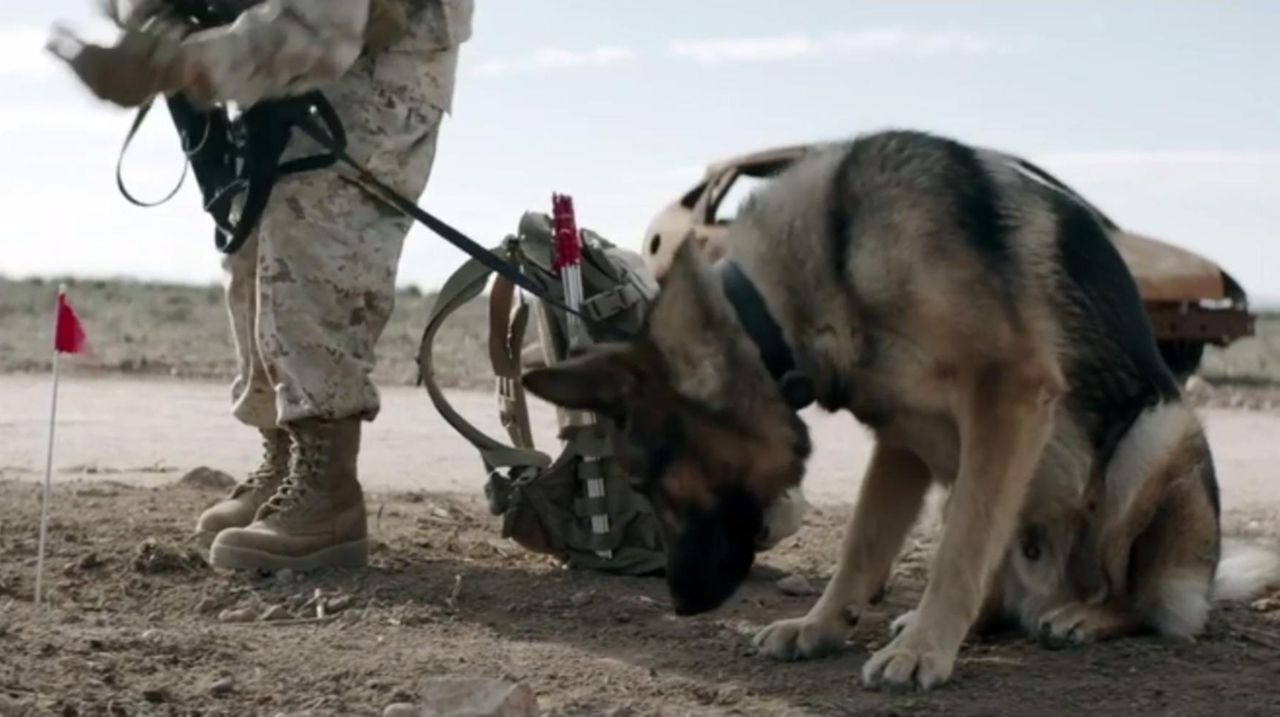 A drama inspired by a real-life Marine (Kate Mara) and her combat dog, who saved many lives in Iraq. Credit: Bleecker Street

PLOT During the Iraq War, a Marine and her dog form a powerful bond. Based on a true story.

Somewhere between grown-up war drama and family-friendly heartwarmer lies “Megan Leavey,” the story of a Marine who forms a powerful bond with her four-legged comrade. Directed by Gabriela Cowperthwaite from a script based on Leavey’s life, this sweet but rather slight film begins with a gritty realism akin to “An Officer and a Gentleman” and ends up feeling more like “Beethoven.” It might work well as a “starter” war film for younger viewers who aren’t quite ready for “The Hurt Locker.”

Kate Mara plays the title role, a high school graduate with a history of drug use who lolls around in the house of her divorced mother (a sharp and shrewish Edie Falco). “I left this place a thousand times in my mind, but I never actually went anywhere,” she says of her small hometown of Valley Cottage in Rockland County. At the local strip mall, a recruiter’s office beckons — and without so much as a goodbye Leavey is on the next bus to boot camp.

Those opening 10 minutes ring so true — and Mara is so convincing as a dead-end youth looking for a purpose — that what follows feels a bit too pat. Leavey becomes determined to join the K-9 unit, and so she strives to prove herself to Sgt. Gunny Martin, a tough-love type (a respectably steely Common). Eventually she is assigned to Rex, a notoriously aggressive German shepherd. Through patience, kindness and willpower, Leavey turns the dog into a brother-in-arms. Then comes the real deal: Iraq.

The film’s war scenes are tense and jittery but stop short of brutality. Likewise, Leavey’s romance with Cpl. Matt Morales (Ramon Rodriguez) tends to simmer but never really heats up. The real love story here is between Leavey and Rex, who are wounded in a bomb explosion and then separated, perhaps permanently. Much of the film centers on Leavey’s battle, as a civilian, to adopt Rex, who, like so many soldiers seems traumatized and possibly unstable. Therein lies this modest movie’s saving grace: It’s an Iraq War drama that isn’t about death and horror, but the power of love.

'Harder They Fall,' 'Insecure,' H.E.R. nab NAACP award noms
1:00
What if Billy Joel starred in an '80s sitcom?
1:00
Billy Joel starred in a 1980s sitcom? He does in this alternate reality
'The Gilded Age': Fantasy, not a history lesson
High-end LI brokers showcased on 'Selling the Hamptons'
Jon Stewart to receive Mark Twain lifetime award for comedy
Didn’t find what you were looking for?