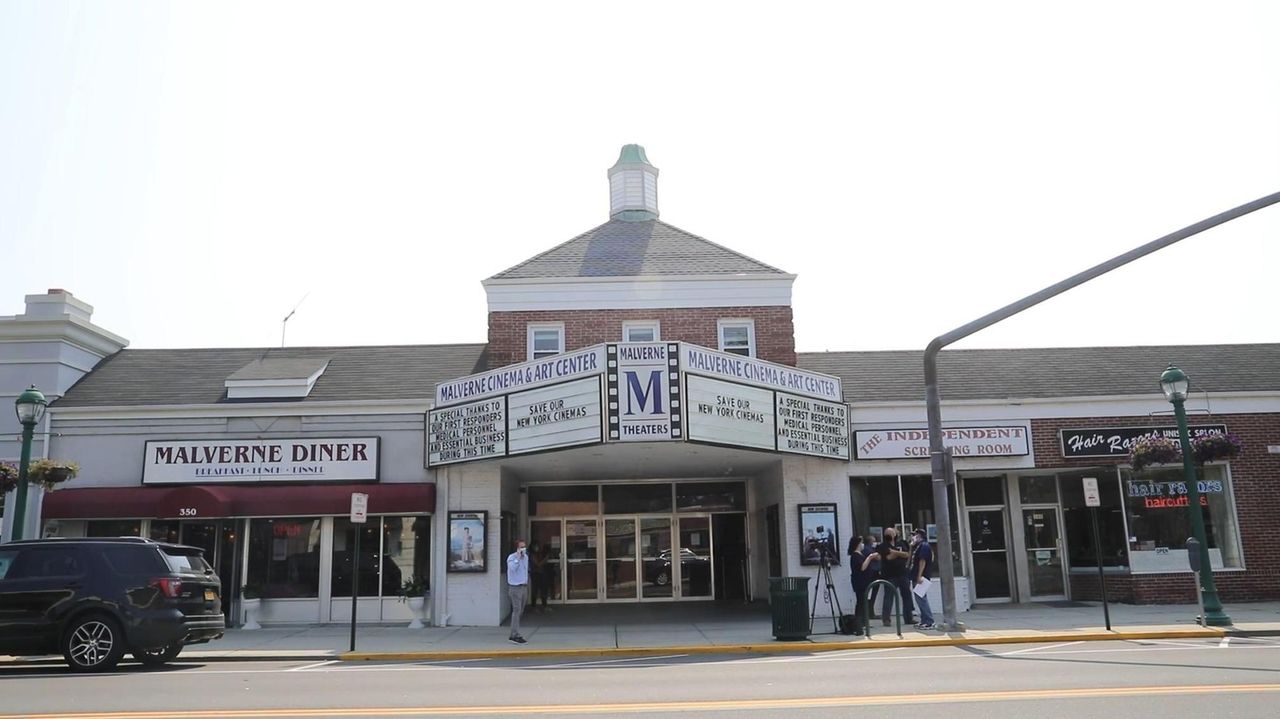 National Association of Theatre Owners of New York president Joe Masher held a news conference outside of the Malverne Cinema and Art Center on Thursday to call for the reopening of movie theaters in the state. Newsday's Rafer Guzman has the story. Credit: Morgan Campbell

As local COVID-19 cases have dropped, restaurants, churches, gyms and bowling alleys have been allowed to resume operation under Gov. Andrew M. Cuomo’s phased re-opening plan. So why not movie theaters?

That was the question asked at a press conference held Thursday morning at the Malverne Cinema and Art Center — a venue that sits in the same building as a gym and  bowling alley that are both open.

“Our theater has only seen 75 active movie days this year,” said Anne Stampfel, speaking under the marquee of the theater she owns with her husband, Henry. “We do not have shareholders or deep pockets. Time is ticking away.”

The Malverne press conference was the latest in a string of public events organized by the New York chapter of the National Association of Theatre Owners, an industry trade group, calling on Gov. Cuomo to let cinemas re-open. Roughly two dozen people stood behind a podium outside the Malverne’s lobby as industry representatives and local officials made the case that theaters were working to keep both patrons and employees safe with new equipment and social-distancing protocols. They also insisted that keeping theaters closed was endangering small businesses and hampering local economies.

“So much of our downtown has been hit so hard,” said State Assemblywoman Judy Griffin. “I implore Governor Cuomo to make an announcement to let these theaters reopen.”

Theaters on Long Island, which have been closed since at least mid-March, were scheduled to re-open in Phase 4, the final phase of Cuomo’s plan. Even so they were far down on Cuomo’s list, alongside concert halls, performing arts centers and live theater venues.

At this point, the Malverne has been closed more days than it’s been open this year. “Our tax bill is due in October,” Henry Stampfel said before the press conference began. “We’re getting to the point where this is frightening. When we reopen it’s going to be such a huge bill for us. We’re already backed up on rent.”

Cuomo has said he has concerns over theaters’ air filtration systems and the notion of patrons sitting in an enclosed space over a long period of time. To combat such concerns, NATO recently rolled out CinemaSafe, a set of voluntarily guidelines for mask policies, socially-distanced seating and the installation of air filters.

Meanwhile, with the all-important markets of New York City and Los Angeles both closed, movie studios have been postponing their releases, sometimes into next year. Some films have gone straight to streaming or video on demand. Disney pulled one of its biggest potential blockbusters, “Mulan,” from U.S. theaters altogether, opting instead to offer it for a premium price on its Disney+ streaming platform. Such moves have created a concern among theater owners that when they do open, they have will little to show their customers.

“We’re at a detrimental turning point in our industry,” said Joseph Masher, chief operating officer of the Bow Tie Cinemas chain and president of NATO’s New York chapter. “If we don’t get movie theaters in New York to open now, the industry around the nation is in peril.”

Masher added that NATO’s New York branch had been in regular touch with Cuomo’s office until recently. “Seemingly, that dialogue has stopped,” he said. “It’s been radio silence for the last few weeks.”