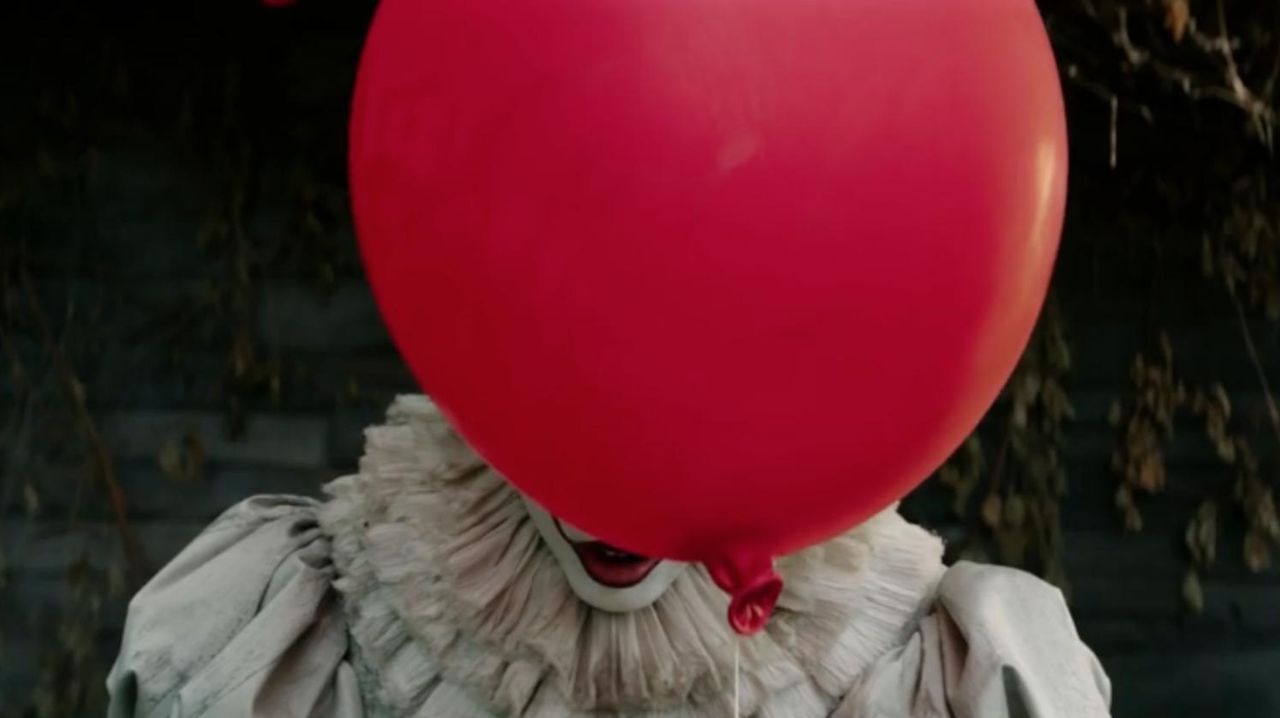 The long-awaited big-screen version of Stephen King's novel about a demon that preys on neighborhood children. Credit: Warner Bros. Pictures

It may just be coincidence, but when it was announced last year that a new adaptation of the 1986 Stephen King novel “It” would be released in 2017, Looney Lenny’s business started to go south.

“It was the beginning of worst fall-winter of my 22-year career,” said the popular New York-area party clown, for whom the Halloween-to-Christmas period is the most lucrative of the year. After 22 years in the business, Lenny says, he could tell there was a connection. And he might actually have some reason to think so: The 1990 miniseries version of “It,” with Tim Curry as the malevolent Pennywise, made the evil clown the stuff of nightmares. Publicity about the new film, which opens Sept. 8, might have rekindled some 1990s-era memories.

At the same time, the bad publicity (bad from a clown’s perspective, anyway) certainly wasn’t limited to “It”: “Creepy clown” sightings — often near forests or schools — had occurred in all 50 states and 18 other countries during 2016. Schools and towns banned clown costumes and clown performances. The new “It” arrives riding wave of bad press for the party clown.

Starring Finn Wolfhard, Jaeden Lieberher and Sophia Lillis and directed by Andy Muschietti, the film also features Bill Skarsgard as Pennywise the Dancing Clown. He was never just a clown — he’s a malevolent force that assumes the form of whatever his victim is most afraid of. He’s a scary entity. That he’ll be aggravating an existing fear (informally known as “coulrophobia”) makes him less than a darling among those who work in floppy shoes, entertain children in hospitals and make balloon animals for overexcited 6-year-olds.

“I don’t know why some people are frightened of clowns,” said Stephen Brennan, who has worked as a circus clown, taught workshops, and directed experimental theater using “traditional” clowns in nontraditional situations (clowns doing Ibsen, clown routines set to Dylan songs). He is associated with the Kaufman Center in Manhattan, where he performs, teaches, write and direct plays for the Merkin Concert Hall stage.

“The clown is by his nature an outsider,” Brennan said. “The makeup and outlandish costume also serve to accentuate his otherness. Then again, there’s something visceral and shocking in a painted face. I remember in the circus we clowns were always warned not to make eye contact with the chimps in particular, as the clown’s face invariably frightened and enraged them.”

At the same time, he said, during his years with a traveling circus, the more privileged an audience was, the more often individual members were likely to be afraid of clowns. “So perhaps it’s also a matter of what an audience brings to it, socially, culturally,” he said. “Our favorite audiences tended to be Hispanic people in the Southwest. Taken as a group, they gave the clowns the warmest reception, and showed less unease in individual interaction.”

In Europe, too, there is a far deeper and longer appreciation for the circus and its clowns. New Yorker Drew Valins and his wife, Michaela Lind, who is Swedish, are both clowns. She was preparing to go to France for a master class in clowning; he got some perhaps unhappy publicity in 2014 for performing without a license on the New York City subway. But they both said that the clown is mirror for society, reflecting the truth — and that, perhaps, makes some people unhappy.

“A good clown, in best sense of word, is practicing a high art,” said Valins.

“And sharing himself behind a mask,” said Lind. “He’s not hiding.”

Marcus Alouan is director of the 89-year-old Gamma Phi Circus at Illinois State University. He called it “sad” that clowning “was being perverted in a way that was never intended.”

Some fears are legitimate, he said, “People do have a problem with concealing the face. We have worked with some special-needs groups and usually will make sure our clowns use a very simple face, or no makeup at all, if it’s going to affect someone negatively — or have the clowns apply their makeup in front of the audience.”

His students, he said, don’t join Gamma Phi Circus for credit. They do it because they love it. “What we hope to do is educate the public about the performing art that circus is,” he said. “Clowning is one of the original forms, one that’s honed and crafted and perfected over years. So to see it used in other ways is a shame. It really is a shame.”

Looney Lenny, aka Andrew Hammer, would agree. His wife, Galina, who blogs at heartseverywhere.com, wrote about his work at hospitals: “It’s palpable to witness the children’s eyes reignite with wonder and delight, happy to be whisked away from their difficult place. This is what my husband, the clown, the comic, the performer does every week.” And yet, even route to the many visits he pays to hospitals every week — three in a day sometimes — Lenny has gotten weird vibes from people, something he says never used to happen.

“You can say and do anything when you’re a clown,” he said. “You operate on the outside of society and you’re commenting on society; the clown takes things on and reflects them back. That’s what’s so great about it and so liberating.”

And scary? “Maybe if you’ve had a childhood trauma,” Lenny said. “Like watching ‘It,’ ”

Send in the clowns

There have been plenty of scary clown movies, especially in the horror genre and especially during the ’80s: “Killer Klowns from Outer Space” (1988) “Clownhouse” (1989) and “Blood Harvest” (1987) starring ’60s oddity Tiny Tim. There was also 1998’s “Carnival of Souls” (not the 1962 Herk Harvey cult film). But if you’re afraid of clowns, every clown movie is a scary clown movie. Therefore, the following are offered as movies that do indeed have clowns, and are disturbing, but aren’t always disturbing just because they have clowns:

THE DARK KNIGHT (2008) What is The Joker’s look if not a variation on the clown mask, as worn by a homicidal maniac? Heath Ledger’s demented version of the longtime Batman nemesis won him a posthumous Oscar. Clowns were probably less appreciative.

IT (1990) It’s not unreasonable to blame the clown-phobia thing on Tim Curry. The “Rocky Horror” star (and the Plaza Hotel concierge in “Home Alone 2”) was the original on-screen incarnation of Pennywise the Dancing Clown in the 1990 miniseries. And he was one frightening dude.

WHAT EVER HAPPENED TO BABY JANE? (1962) Bette Davis is the former child star turned crazy lady who torments her sister Blanche (Joan Crawford) and has been scaring the bejeezus out of unattended children for several generations — partly because of the scene in which she returns to her ghostly pancake makeup and overly rouged lips. She looks unhinged. She also looks like a circus act.

THE GREATEST SHOW ON EARTH (1952) Jimmy Stewart’s character, Buttons the Clown, was a gentle, likable sort who never came out from behind his clown makeup — because he was wanted for murdering his wife, in this 1952 Oscar winner directed by Cecil B. DeMille, usually ranked among the least deserving Best Pictures.

LIMELIGHT (1952) One of Charlie Chaplin’s loveliest and most poignant films, in which he plays Calvero, the once-famous stage clown who rescues a suicidal dancer (Claire Bloom) and has to get out of the way so she can find a more age-appropriate romance. The melancholy clown has never been more moving.

Should LeVar Burton be 'Jeopardy!' host? 237,000 say yes!
HBO: Osbourne to go on Maher show after 'The Talk' exit
Reports: Colton Underwood reality series in the works for Netflix
'The Talk' returns with a show 'unlike any other we've had before'
8:34
'The Buzz': Catching up with 'Cosby Show' star Malcolm-Jamal Warner
'Blue Bloods' shoots season finale on LI
Didn’t find what you were looking for?