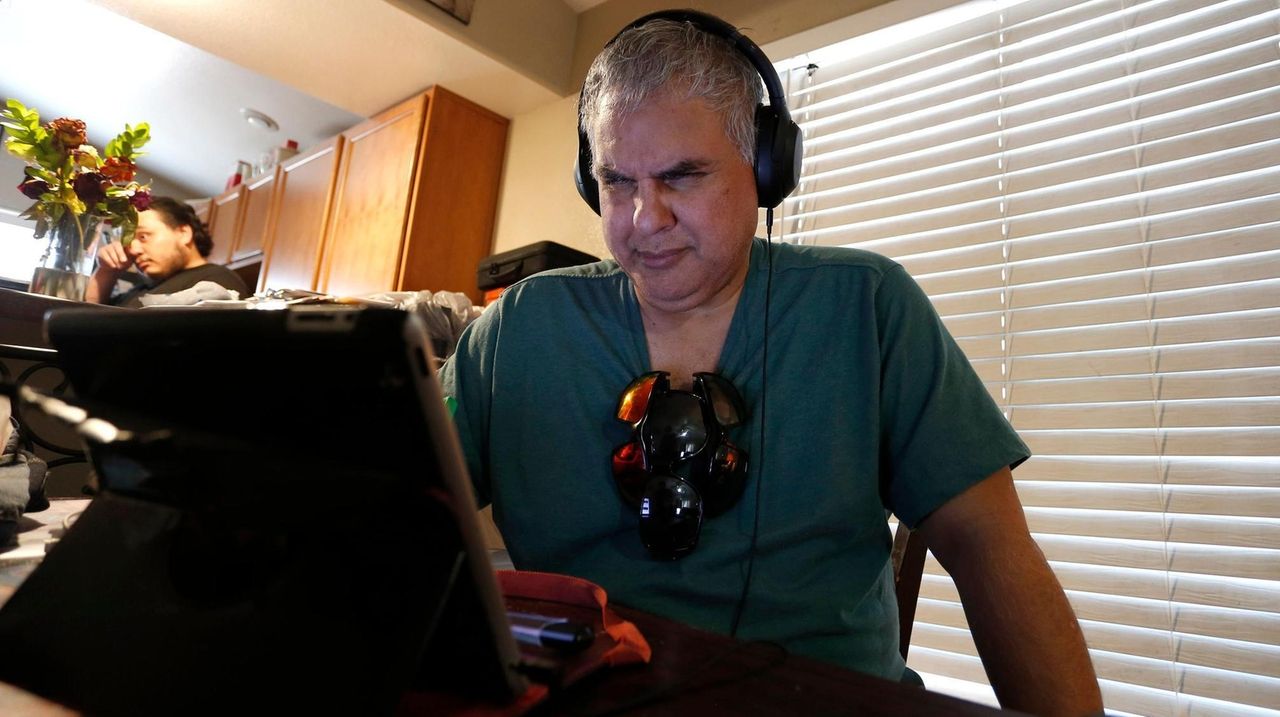 Robert Tarango's entry into movies sounds like it could have been dreamed up by a Hollywood screenwriter. One day, he's working in the cafeteria at the Helen Keller National Center in Sands Point. The next, he's discovered by a film director. A few months later, the Selden resident is playing the lead in a movie. The film is shown, gets raves from critics and suddenly becomes a real contender during awards season.

But there's one new twist to this real-life "A Star Is Born"-ish scenario: Tarango is deaf and blind. He's also the first deaf-blind actor to play a leading role in a film. That would be "Feeling Through," which is vying for best live-action short at the Academy Awards on April 25.

"When I was younger I always wanted to become an actor," said Tarango — who gives his age as "over 55" — via a sign language interpreter and translator during a recent Zoom interview. "I worked a regular job every day and I still had that dream, but didn’t think it was possible. Finally this opportunity came up and it was just magic."

"Feeling Through" deals with the chance encounter between Tereek, a homeless Black teen played by actor Steven Prescod, and Tarango's character, Artie, a white man who is deaf and blind and needs help getting to a bus stop. In the film's brief 18 minutes, the two men find a way to communicate: Artie writes things down on a pad, and Tereek uses his fingers to spell out the answers on Artie's palm. They also develop a bond that changes Tereek's outlook on life.

The movie, which was executive-produced by Oscar winner Marlee Matlin, and a making-of documentary can be seen at feelingthrough.com.

10 YEARS IN THE MAKING

The movie was inspired by a true incident that took place 10 years ago when director Doug Roland met a deaf-blind man named Artemio on the streets of New York City. As in the movie, the two men also used the notepad and hand spelling method of communication. Between the time they met and the arrival of a bus, Roland was charmed by Artemio. That night, he began writing a screenplay based on the encounter.

A year later, he had a script written. As other projects came up, the story remained idle until about five years later when Roland was cleaning up his computer. With his creativity sparked, he knew the time was right to make the film. He also knew he wanted Artemio to play himself and reached out to Helen Keller National Center to help find him.

"That was so out of our ordinary day to have a filmmaker approach us for a project like this," said Sue Ruzenski, CEO of Helen Keller Services, and a producer of the film. "Our experience is that people who have no connections to the [deaf-blind] community do have assumptions or might portray the community in a different way, so there was some caution there for sure."

Once convinced of Roland's sincerity with the project, the organization agreed to help. When Artemio wasn't located, Roland conducted a search to find a deaf-blind person who could play the role. Cue Tarango, who was recommended by Erin Quinn, a translator at the center.

"It’s kind of a cliche thing that you hear people say that the moment this actor walked into the room I knew they were right for the part, but really it was as simple as that for Robert," said "Feeling Through" director Doug Roland.

Ultimately, Tarango's smile and charisma won over Roland. "He started cracking these really hilarious jokes about being a movie star and needing to get time off to be a movie star. He possessed this innate warmth and goodness that felt very much like some of the key qualities that Artemio possessed," Roland said.

For Tarango, getting the role was a moment he had been waiting for all of his life. "It’s one of those things where I realized, you never give up on your dream. You keep going. I still cannot believe I had this opportunity," he said.

Ironically, after Tarango was cast, Artemio was located, and he and Roland have since resumed their acquaintance.

Though Tarango admits there was some awkwardness the first time he and Prescod met, they quickly developed a real rapport.

"Yes, we had interpreters on set as well, but we had this natural bonding from the moment we met," Tarango said. "And it was a beautiful relationship that grew while we were on screen and worked together, and I hope that comes through in the film."

Filming took place over four bitterly cold nights in November 2018. For Tarango, however, the weather wasn't his biggest challenge. Though he has been deaf since birth, his vision has gradually diminished over the past 30 years. With roughly about 10% of his sight remaining, playing someone who is fully blind was difficult.

"It was very emotional for me," he said.

A visual interpreter was always on the set, and Roland was careful in creating specific camera setups to ensure that Tarango had access to the interpreter at all times. A bigger obstacle for Roland was Tarango's inexperience.

"Robert did such an amazing job and his attitude and passion with which he came at this made it totally work," Roland said. "But with that said, there’s a learning curve oftentimes working with a first-time actor to take ownership of the role."

Roland's patience and guidance resulted with Tarango resulted in a touching performance. By the end of the shoot, Tarango said he felt like "a real actor."

When the pandemic hit last year, financial cutbacks resulted in Tarango's job at Helen Keller National Center being eliminated. He's since relocated to Glendale, Arizona — just outside of Phoenix — where he grew up and lives with mother, and is near many other members of his family.

Still, his heart remains with Long Island, where he lived for 24 years. Shortly before moving here several things happened — he had to quit his job at a meatpacking plant after he became unable to see at night. He was also robbed and beaten on July 4, 1995.

Upon learning about the Helen Keller center, he relocated to Long Island where he learned things like navigating stairs, how to grocery shop, how to get on a bus and more. He eventually got a job in the center's cafeteria doing jobs like sweeping, washing dishes and emptying trash.

Most importantly, he had friends, including a deaf roommate who he shared an apartment with in Selden.

"I had a social life on Long Island. I had friends who were deaf that I was able to chat with. The challenge is I don’t really have that life here in Arizona as much," he said.

One social — and socially distanced — gathering he would like to attend is the Oscars, though, he still didn't have an acceptance speech prepared if the film wins. Still, he has already enjoyed some of the perks of being an actor. When the movie was screened in North Carolina shortly before the pandemic, Tarango was the hit of the evening. "Right after the showing, I had a line so long of people asking for my autograph. It was amazing," he said.

The movie has also been screened at Helen Keller National Center and at numerous schools on Long Island.

Now Tarango is hoping that with all of the attention and Oscar buzz the movie has gathered, not only will he get more film roles, but it will encourage Hollywood to welcome other actors with disabilities. "I know I'm not alone," he said. "I hope other filmmakers and directors aren’t scared to work with other deaf-blind individuals or people with disabilities. We all have that skill, we can do it."