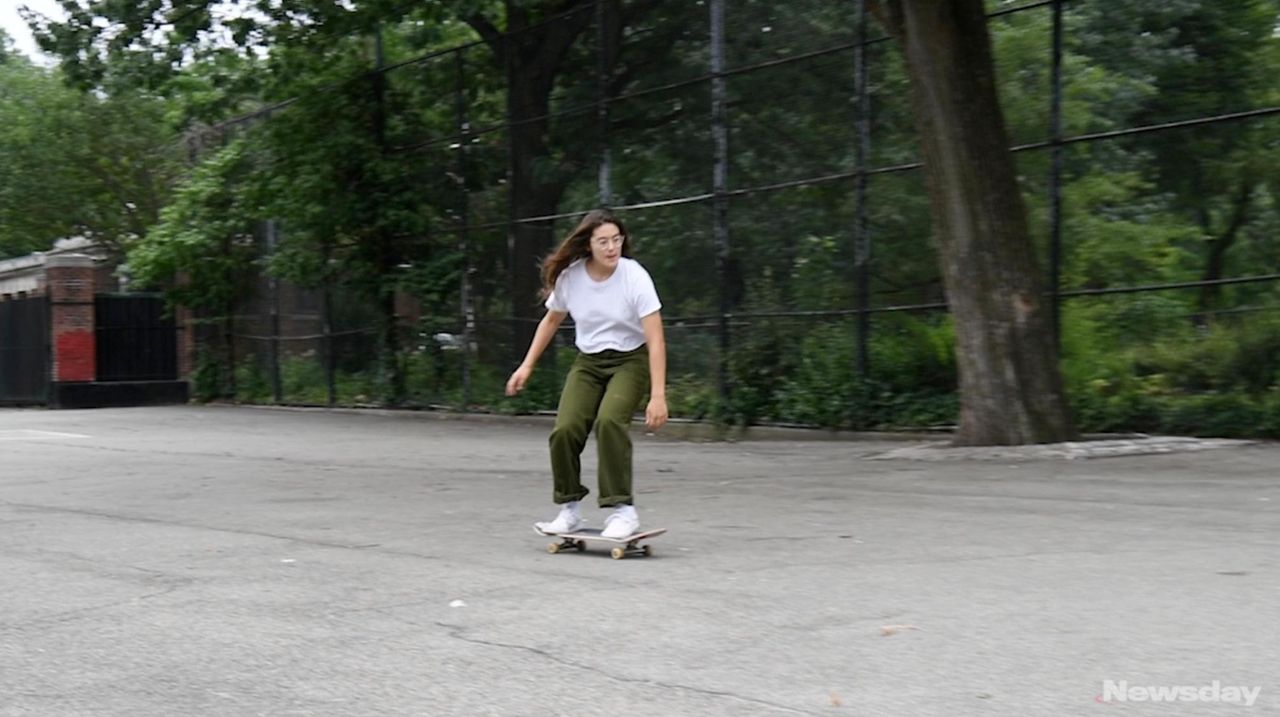 Rachelle Vinberg, who stars in "Skate Kitchen," a coming-of-age film directed by Crystal Moselle, on Tuesday spoke about their new movie, which tells the story of a group of young female skateboarders.  Credit: Corey Sipkin

In the early part of 2016, the director Crystal Moselle was riding the G train toward Brooklyn when she spotted two teenage girls. They were talking a little loudly, but what intrigued Moselle was that they were holding skateboards. Moselle struck up a conversation with the girls, one a native Long Islander named Rachelle Vinberg, the other a Brooklynite named Nina Moran, and found them both endearing and charismatic.

Moselle wound up shooting a 13-minute film with Vinberg, Moran and several of their friends titled “That One Day,” which has now been reworked and expanded into a feature film, “Skate Kitchen.” When it arrives in theaters Aug. 10, “Skate Kitchen” will join a short list of noteworthy skateboarding movies, including 2005’s “Lords of Dogtown,” about the sport’s early days in Southern California, and, perhaps, “Mid90s,” a coming-of-age drama that marks the directorial debut of Jonah Hill (it’s due in October).

AN ALL GIRL CREW

What makes Moselle’s film unusual is that its cast is largely female. Co-written by Moselle with two other women, “Skate Kitchen” is a glimpse into a subculture of rough-and-ready girls trying to claim some concrete of their own in the male-dominated skate-parks of New York City.

“Skate Kitchen” is Moselle’s feature follow-up to “The Wolfpack,” her much buzzed-about documentary from 2015 about the six Angulo brothers, who were locked in an apartment for 14 years and raised on thousands of movies. Though very different in theme, the two films share some similarities: Both focus on societies within societies, both take place on the Lower East Side and both began when Moselle zeroed in on complete strangers who caught her eye. (She spotted the Angulos walking around town dressed in identical suits and sunglasses, like the cast of Quentin Tarantino’s “Reservoir Dogs.”)

“I think I’m drawn to groups of young people that are passionate about things,” says Moselle, 38. “I think I have this instinct that kind of goes off when there’s a subject that I’m interested in. It’s kind of unexplainable.”

For “Skate Kitchen,” Moselle used almost entirely nonprofessional actors who play fictionalized versions of themselves. Two notable exceptions are Elizabeth Rodriguez, a regular on Netflix’s “Orange Is the New Black,” and Jaden Smith. (Yes, that Jaden Smith -- but more on him later.) Vinberg, for instance, plays Camille, a Long Island kid (Vinberg grew up in East Meadow, Westbury, Bellmore and Massapequa) who has a tumultuous relationship with her mother (check, says Vinberg) and frequently hops the Long Island Rail Road to meet up with skater friends in Manhattan. Like Camille, Vinberg is half-Hispanic but doesn’t speak much Spanish. “It’s pretty accurate,” she says.

The movie’s title also comes from Vinberg: It’s an Instagram account she started as a way to raise the profile of her all-female crew.

“I came up with the name Skate Kitchen because I used to watch a lot of videos of YouTube girl skaters,” says Vinberg. “A lot of the comments were like, ‘Oh, she should be in the kitchen.’ You know that degrading remark — you hear it all the time.”

When Vinberg, 19, shows up for an interview at one of her favorite hangouts, Tompkins Square Park on the Lower East Side, on a recent afternoon, she looks very much like her on-screen alter-ego — and not just because of the ubiquitous skateboard she rides. Vinberg’s brown hair reaches nearly down to her waist. She wears beat-up adidas sneakers, army-green pants, round glasses and a brand-new white T-shirt with a brown stain on the chest. “Coffee, of course,” she says with a laugh. “But I don’t care.”

It’s thanks to this unassuming young woman that “Skate Kitchen” landed its most famous star, Jaden Smith, the 20-year-old son of Will and Jada Pinkett Smith. In September of 2016, Vinberg recalls, she was hanging out with friends when she got an Instagram message from Smith complimenting her skating videos. “Me and Nina were like, ‘What?’ ” Vinberg says. “I thought it was hilarious.” When Moselle said she needed someone to play the role of a handsome skate-kid named Devon, Vinberg suggested her Instagram friend.

“Obviously, in the beginning, everybody was like, ‘OK, wow,’ ” says cast member Ardelia “DeDe” Lovelace, 20, of Smith joining the film. After a couple of weeks, though, the novelty wore off. “We just bonded over this one thing, skateboarding, that we all genuinely like,” Lovelace says. “We were trying to learn tricks and stuff, trying to help each other. And then it just became really natural after a while.”

Vinberg, now based in Brooklyn, says she’s come a long way from the shy, uncertain skater-girl she once was, though she still sees versions of herself in the city. “A lot of girls at the skate park, they’ll literally sit on the sides and kind of watch,” Vinberg says. “You have to go up to them and be like, ‘Hey.’ Then they’ll kind of join along.”