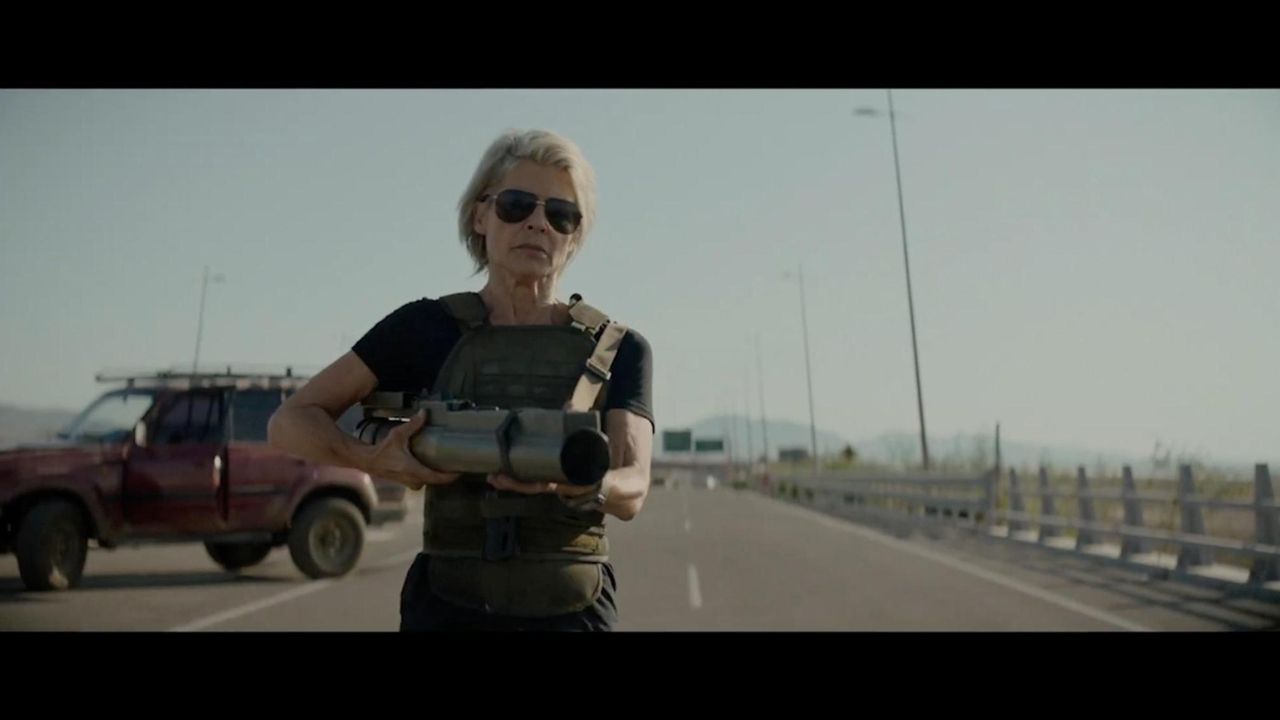 Linda Hamilton and Arnold Schwarzenegger are reunited in "Terminator: Dark Fate," due in theaters in November. Credit: Paramount Pictures

The 2½-minute trailer opens with the series' signature image of a two-lane highway rushing up to the viewer, as Dani Ramos (Natalia Reyes) recounts, "Two days ago, I had this nice, simple life. And now it's a nightmare." A male voice begins intoning the Björk song "Hunter," and we see a liquid-metal Terminator in human guise (Gabriel Luna) giving chase in a dump truck that smashes through oncoming traffic.

After battling Dani's protector Terminator, Grace (Mackenzie Davis), he approaches the two on foot, coming in for the kill — and a red SUV screeches up, Sarah Connor steps out, and after a round of high-caliber rifle fire dispatches Luna's Terminator with a shoulder-mounted missile launcher.

Later, momentarily safe, Connor tells Grace, "I've never seen one like you before. Almost human." As the trailer intercuts shots of Grace being examined on an operating table in a military facility and breaking free of restraints, she replies, "I am human."

Later still, as they walk through woods, Grace asks why Connor cares what happens to Dani. "Because I was her," Connor responds, evidently referring to being hunted by a Terminator from the future to avoid giving birth to humanity's savior from Armageddon. Then they reach a cabin — and a weathered, bearded T-800 Terminator (Arnold Schwarzenegger), last seen being melted in a vat of molten steel (in "Judgment Day"), opens the door. Many action shots follow, including one of a large commercial jet in a dark sky ramming another jet.

"This new film has recaptured that tone of those first two films," Cameron promises in the featurette. "It's gritty, it's fast, it's intense and it's just a white-knuckle ride."

In a Reddit Q&A Thursday, Schwarzenegger, 71, responded to a fan asking how it felt to reunite with Hamilton and Cameron following some lackluster Terminator films without them. "It brought back so many memories," he said. "Linda just being the toughest woman you can imagine on screen, Jim and I talking about my character constantly. And the new gang was perfect. Tim is a master. So patient on set, such great vision. Gabriel, Natalia, and Mackenzie were working 18 hours a day to give Tim all they had."

Later, answering a question about how a T-800 Terminator can age, Schwarzenegger quoted his character from "T2": "I'm a cybernetic organism. Living tissue over a metal endoskeleton."