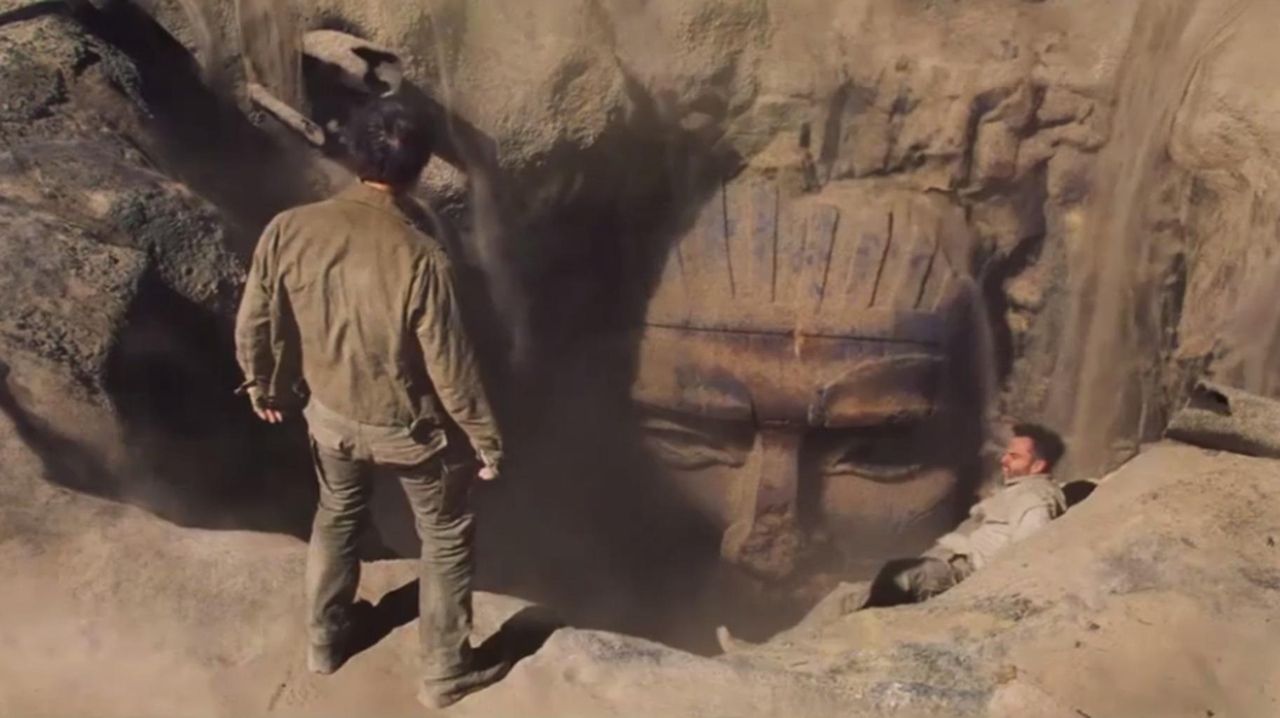 The star power of Tom Cruise could help Universal Pictures relaunch its "Mummy" franchise and, perhaps, an entire series of films set within a Universal "monsterverse."  Credit: Universal

PLOT An explorer disturbs a mummy’s tomb and unleashes an evil force.

BOTTOM LINE A blaring, bloated zombie of a movie.

What happens when you update Universal Pictures’ classic monster movies, with their old-world charm and Gothic elegance, for a new audience accustomed to the high-tech action and postmodern sarcasm of Disney’s Marvel movies? The answer, in the case of “The Mummy” — a big-budget reboot of the 1932 Boris Karloff gem — is a hideous Frankenstein of a film that seems doomed to repulse anyone who comes across it.

Sorry for the mixed monster metaphor, but this is one massive mess of a movie. The first in a planned series of reboots, in which everyone from the Wolf Man to the Hunchback of Notre Dame will live in a shared Dark Universe, “The Mummy” sets a tone of thematic confusion and box-office desperation. Written by what seems to be a conflicted three-man team (including David Koepp, of “Jurassic Park”) and directed as if in a panic by Alex Kurtzman, “The Mummy” is an action-horror-fantasy driven entirely by special effects, with incongruous elements of black comedy, eroticism and gadgetry — all laid atop the narrative blueprint of an “Avengers” movie.

Not even the charisma of Tom Cruise can shine through this film’s CGI-generated murk. Cruise plays Nick Morton, a mercenary tomb raider who discovers the sarcophagus of the cursed Egyptian princess Ahmanet (Sofia Boutella, half-naked and covered in rune tattoos). Once reanimated, she gets the hots for Nick and appears to him in gauzy hallucinations that resemble a perfume commercial. Luckily, Nick’s sort-of girlfriend, Egyptologist Jenny Halsey (an oddly icy Annabelle Wallis), knows who to call: a genial if somewhat unstable doctor whose last name is Jekyll (Russell Crowe).

This may be the movie’s worst conceptual misfire. “The Mummy” wants to establish Jekyll/Hyde as its own Banner/Hulk, but also as its own Nick Fury, the top commander behind the Marvel heroes. Crowe is surprisingly fun in the role — he plays Hyde like a steroidal Cockney gangster — but the character can’t serve triple duty as head honcho, superhero and mad scientist all at once.

Virtually everything in this movie seems like the wrong decision. Why does “The Mummy” spend so much time in 12th century England? Why is it partly a zombie comedy, in which Nick is pestered by an undead wisenheimer (Jake Johnson)? Why are the one-liners so dopey? It has to be said: This “Mummy” makes even the Brendan Fraser versions of the franchise seem like classics.

'The Talk' returns with a show 'unlike any other we've had before'
Luke Bryan tests positive, sidelined from 'Idol'
'Thunder Force': Melissa McCarthy isn't so super in Netflix comedy
CNN's Baldwin: Gender gap still an issue in TV news
'Game of Thrones' celebrates its 10th anniversary
2021 SAGs: 'Trial of the Chicago 7' wins top prize
Didn’t find what you were looking for?