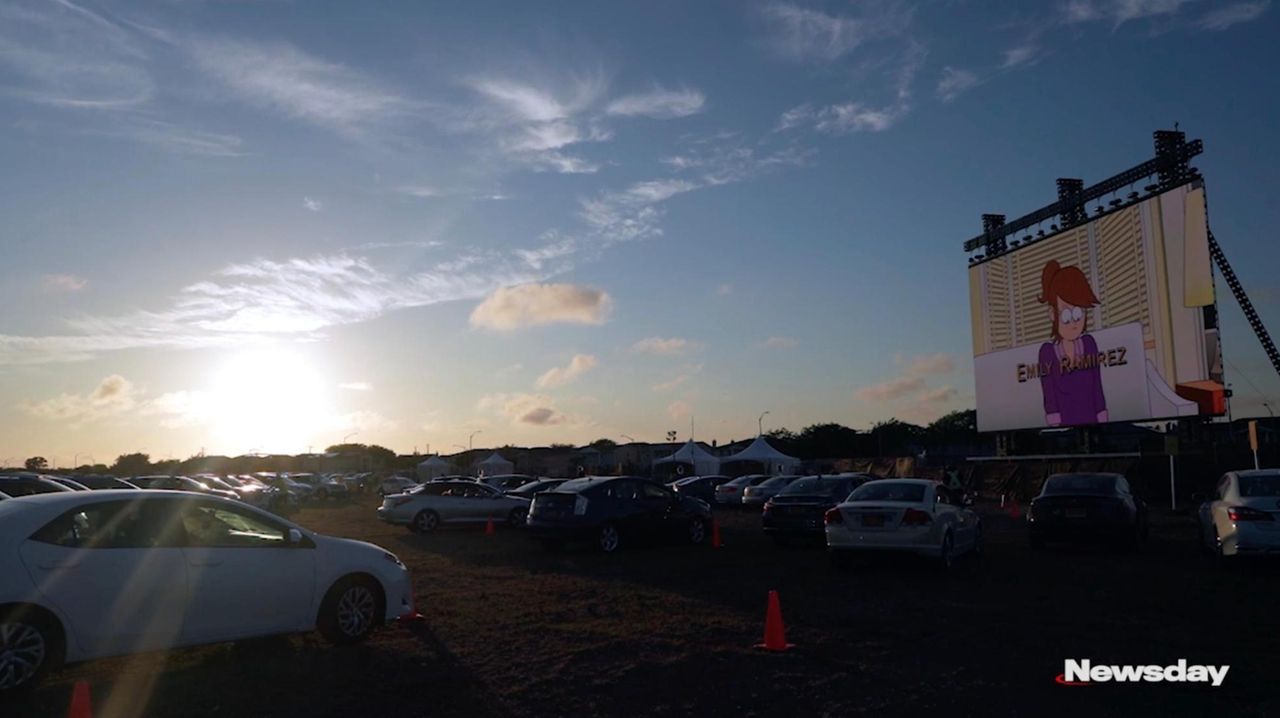 It was a night of nostalgia for some moviegoers on Thursday at the Tribeca Film Festival's Nickerson Beach Drive-In. Credit: Corey Sipkin

After spending months indoors to avoid the COVID-19 virus, does anything sound better than a drive-in movie? If you’re of a certain vintage, like myself, you remember drive-ins fondly, maybe as kid in the back of your parents’ station wagon or as a teenager with a hot date. For years, drive-ins seemed outmoded, but now, with their built-in social distancing, they're all the rage.

You may have heard that the Tribeca Film Festival recently launched a nationwide series of pop-up drive-ins. Here on Long Island, the Tribeca Drive-In has camped out at Nickerson Beach Park in Lido Beach. It offers four weekends of programming from July 9 to Aug. 2, with a concession stand, meals delivered to your car and a giant LED screen that will show double features and even daytime matinees. It sounds promising: A safe way to join a crowd for an evening’s entertainment.

If you’re thinking about going, you may have some questions. Will it be safe? Can you move around freely? How’s the food? What about bathrooms? I went to Nickerson Beach’s opening night to see how the experience measured up. The bad news is that the hard realities of the pandemic will occasionally intrude on your nostalgic fantasies. The good news, though, is that the Tribeca Drive-In lived up to its promise in nearly every way.

A few things to know: Tickets must be purchased online in advance; you can’t buy them at the gate. Everyone must bring a mask; you'll need to wear one if you are outside your vehicle. Walking around is discouraged, and you are not allowed to tailgate or picnic. Safety is a big concern: I never saw a staffer without a mask, and at one point I was asked to reposition my car to allow for greater distance between vehicles.

Before showtime, I checked out the restrooms. Nickerson officials initially envisioned using restroom trailers but decided that would make social distancing difficult. Instead, they opted for nine individual port-a-potties — disappointing, but understandable. The units were monitored by a conscientious staffer who told me exactly which numbered unit to use. Outside were several hand-sanitizing stations and six sinks with foot-pumped water, soap dispensers and paper towels. All in all, fairly civilized.

I didn’t see anyone else use the restrooms, and the handful of people I talked to clearly hoped to avoid them. “I brought gloves and sanitized wipes,” said Lisa DePrisco, a respiratory therapist from Long Beach who arrived with a car full of cousins and friends. “We’re prepared if we have to.”

Back at my car, I decided to have some food delivered, which turned out to be a little confusing. The first step was to go to nassaufoodtrucks.com. I found the website a little clunky to navigate, but I eventually made my way to the menu of Stuf’d, a food truck that serves full meals like lobster rolls and sliders. You can also opt for Jimmy’s Snack Shack, which offers traditional concessions like popcorn and candy.

I decided to splurge on the $28 LI Lobster Roll with house aioli. I punched in my credit card number and was told my order would be ready for pick-up at 8:40 p.m. — but there was no delivery-to-car option! This seems to be a glitch, because Stuf’d will indeed deliver to your vehicle. They first tried to reach me by text (sorry, guys, I was watching the movie), then called to ask for my row number and a description of my car. Soon, a friendly carhop arrived with my dinner, and I was pleased to find that the lobster roll came with big, blistery fries, which hadn’t been listed in the description.

At any rate, it appeared many people brought their own food. Jennifer Pearce, from Oceanside, said she and her three teenagers stopped at Chipotle on their way in, though her son Christopher, 19, said he might trek over to the snack truck later for popcorn. I saw at least a couple of people with coolers in their trunks, and one group who brought lobster rolls from D.J.’s Clam Shack in Wantagh.

I had some initial concerns about the movie-viewing experience. The sound, broadcast via an FM signal through your car radio, was badly out of synch on the advertisements and cartoons that preceded the movie. Nevertheless, there were no audio or visual problems with the feature film, a sneak preview of “Palm Springs,” a comedy starring Andy Samberg. I was slightly annoyed at the little white lights that kept running up the left edge of the screen (like an old film that had been misthreaded), but that’s a small complaint. I’d also forgotten how much schmutz can build up on the inside of your windshield; next time I’ll do a better cleaning job.

All told, it was a delight to sit in my car with the windows down, my own private sound system and a tasty meal in my lap. I liked hearing the laughter from neighboring vehicles as we all stared up at the big, bright screen under the night sky. And when the movie was over, I was out of the lot and on the road in minutes.

A guy I met earlier in the evening, Jon Leffel, of Plainview, had brought his 12-year-old son, Jesse. It was the kid’s first drive-in experience. Leffel said he can remember seeing “Star Wars” at a drive-in sometime in the late '70s, when he was 7 or 8. “So, it’s been a while,” he said. “If we can take any positives out of the pandemic, I think drive-in movie theaters would certainly be one of them.”