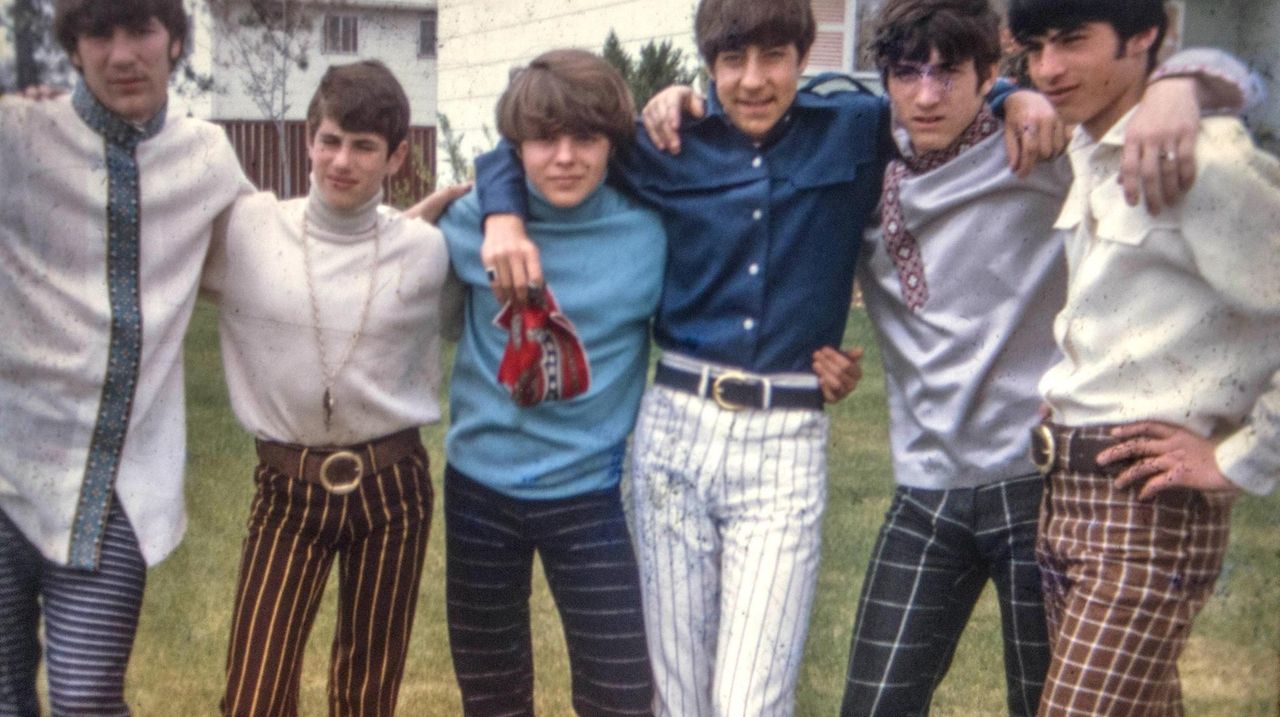 A documentary recalls the Tuneful Trolley, a pop-rock band of LI high-schoolers who made it to the cusp of stardom in 1968. Credit: Joe Nolan Performance Video

As reunion concerts go, it was modest: A little-publicized gig at the Viking Inn, an Islip watering hole, in August 2018. In the crowd were perhaps 150 locals, most of them closely connected to the band members. Commemorating the night were souvenir T-shirts emblazoned with the words: "50 Years: The Tuneful Trolley."

Even the most zealous rock fans of the 1960s may not remember the Tuneful Trolley, a band of high-schoolers from Islip and Bay Shore who in 1968 suddenly hit the big time. One minute they were playing for their families, the next they were signed to Capitol Records, the same label as The Beatles. A catchy single, "Sunny Days," hit the airwaves, followed by a well-reviewed debut LP, "Island in the Sky," but the Tuneful Trolley struggled to stand out in a crowded field. Changing musical tastes and unexpected shifts behind the scenes also worked against the young musicians, who were just 15 or even 14 years old. Within a year, it was over.

That whirlwind journey through the pop-music machine is the subject of "The Tuneful Trolley," a documentary from Islip native Joseph Nolan that will screen Aug. 11 at the Long Island International Film Expo with several band members in attendance. Nolan interviewed nearly everyone involved with the group, including Woodstock founder Artie Kornfeld and pop impresario Kenny Laguna (best known for managing Long Beach rock icon Joan Jett). Built on Nolan’s in-depth research and memorabilia from the band’s personal troves, "The Tuneful Trolley" shines a light on one of the many overlooked pop groups that left an imprint, however small, on the 1960s.

"We were as optimistic as any of them, we thought we were as talented as any of them," according to former Trolley keyboardist Paul Conocenti, 68. "It’s just a matter of where you get the breaks."

Nolan, 69, has a history with the Tuneful Trolley, having attended Islip High School with several members. "I was around them when this was happening in real time," Nolan said in a recent interview. "And I was green with envy."

Post-graduation, the classmates fell out of touch (Nolan now lives in New Jersey; others have moved as far away as California), but the rise of Facebook brought them together again, if only online. Meantime, Nolan had begun dabbling in filmmaking — "I describe myself as a serious amateur," he said — and when the Tuneful Trolley members began trading messages about a reunion show, he decided to shoot it.

"As close as I was to this thing, I didn’t know very much about how it happened," he said of the band’s quick rise and fall. As he dug into the details, Nolan began to think he might have a documentary on his hands.

The Tuneful Trolley’s six-man lineup consisted of singer Joey DeSane, guitarists Santo Ciccarello and Tony Bordonaro, bassist Brian Parks, keyboardist Conocenti and a percussionist who used the stage name Josh Rio. (That member declined to take part in the film or the reunion, according to Nolan). All the bandmates were Islip High School students save for Conocenti, who hailed from nearby Bay Shore.

The band’s big break came through a few degrees of separation: According to Conocenti, his father worked at a furniture store whose owner, Sam Traub, took a shine to the band. Traub knew Sandy Yaguda, a member of Jay and the Americans, the vocal group from Queens that had scored several early ‘60s hits ("She Cried," "Come a Little Bit Closer") but whose career seemed be stalling. After Yaguda saw the Tuneful Trolley play live — at the 25th wedding anniversary of Conocenti’s parents — he signed them to his band’s production company, JATA Enterprises.

"We were talented for a bunch of 15-year-olds," said Ciccarello, 68, now a retired New York City firefighter who still lives in Islip. "We could all play our instruments well and Joey had a good voice. I think Sandy Yaguda saw something in us that maybe we didn’t even know we had."

Yaguda led them to Kornfeld, then a Capitol staffer based in New York, who signed them to the label. In the summer of 1968, the six teens found themselves regularly taking the Long Island Rail Road into Manhattan to write and record at the famous Brill Building, home to such legendary songwriters as Carole King, Gerry Goffin and Burt Bacharach.

"Our heads were in the clouds because it was all happening so quickly. We’re in the studio and Tiny Tim is coming in and out," Conocenti recalled. "We were thinking, ‘This is gonna be it!’"

Indeed, heads in clouds became the fanciful cover art for the band’s 1968 LP, "Island in the Sky." It received a sparkling write-up in Billboard, and the lead single, "Sunny Days," a yearning psych-pop ditty written by Kenny Laguna and Paul Naumann, got decent play on local radio station WGLI. Girls from around the country sent the boys fan mail. The Tuneful Trolley continued to play live, at one point opening for the Hassles, featuring a then-unknown keyboard player named Billy Joel. Meanwhile, the boys were becoming high school heroes — but at a price.

"I feel I never really had a normal high school, because I was always practicing, we were always on the road," Conocenti said. "People knew me, but I didn’t know who they were. They’d say, ‘Hey, Paul!’ And I’d be like, ‘Who’s that?’"

Then something unexpected happened: Jay and the Americans scored a hit with "This Magic Moment," a nostalgic soul cover that improbably reached No. 6 in early 1969. As the Americans’ star began rising once more, the kids of the Tuneful Trolley began to feel like a lower priority at JATA Enterprises. At the same time, their gentle brand of Beatles-y pop was giving way to the harder, heavier sounds of acts like Jefferson Airplane, Cream and the Beatles themselves, whose trailblazing White Album had come out in late 1968.

"Records were just changing from pop to rock," former Capitol staffer Kornfeld tells Nolan in the film. The Trolley album, he says, "was caught somewhere in the middle with format."

Not long after the album fizzled, the band members asked to be released from their contract with JATA. DeSane continued to pursue music and Parks considered acting, but the others returned to the normal rhythms of high school, then adulthood. Conocenti entered the health care field and moved to California, Bordonaro opened two barbershops in Florida, Parks went into the seafood industry in Seattle and Ciccarello married his high school sweetheart. DeSane died in 2008.

Still, the Tuneful Trolley never fully faded away. "Island in the Sky" was reissued on CD by the Now Sounds label in 2008; AllMusic.com praised its vocal harmonies, arrangements and "engaging pop tunes." The reunion concert, with DeSane’s brother Frank filling in on vocals, also kept the band’s legacy alive. Since then, the members have once again been playing music together, over the internet.

"I hadn’t played my guitar in 50 years, and now I pick it up every day," said Ciccarello. "It just renewed everything."

The Long Island International Film Expo returns this year with both in-person and virtual screenings. Here are a few examples:

CHICKS (Aug. 10 and 11 at 9 a.m.) Four girls from a small town in Russia decide to open their own fitness club in this comedy-drama about tradition, religion and gender. In Russian with English subtitles.

CHARLENE (Aug. 10 at 2 p.m.) A small-town detective interrogates a group of kids that may be involved in his daughter’s disappearance. Shot in East Meadow by West Hempstead co-director Josh M. Graydon.

ONE MOMENT (Aug. 10 at 6:30 p.m.) The late Danny Aiello stars in this comedy-drama about middle-age siblings trying to care for their aging father. Filmed all over Long Island by writer-director Deirdre O’Connor.

SECOND CHANCE (Aug. 11 at 11:30 a.m.) A mother and daughter — one battling a rare disease, the other facing a lifesaving transplant — begin writing inspirational songs together in this Merrick-filmed documentary.

LAST CALL: THE SHUTDOWN OF NYC BARS (Aug. 11 at 7:30 p.m.) A documentary on the city’s nightlife industry and its struggle to survive the pandemic. Written and directed by Johnny Sweet.

MARIONETTE LAND (Aug. 12 at 2 p.m.) A documentary on puppeteer Robert Brock, who lives above his own marionette theater with his mother, Mary Lou. Directed by Alexander Monelli.

BONE CAGE (Aug. 12 and 13 at 9 p.m.) A man who works as a clear-cutter in Nova Scotia ends each shift by looking for injured animals among the destruction. Starring and directed by Taylor Olson; adapted from a play by Nova Scotian author Catherine Banks.

LIE HARD (Aug. 13 at 6:30 p.m.) A pathological liar borrows $4 million from a crime syndicate to buy a mansion and impress his girlfriend’s wealthy parents. Ian Niles’ comedy was filmed in Nassau County.

FALL BACK DOWN (Aug. 14 at 1 p.m.) A depressed former activist takes a job in a sweatshop and makes a grim discovery. Written and directed by S.B. Edwards.

The Long Island International Film Expo runs Aug. 10 — 15 at the Bellmore Movies and Showcase, 222 Pettit Ave. Films screen in roughly two-hour blocks that generally include one feature and multiple shorts. For the in-person festival, single-block tickets are $15 and all-day passes are $35. For the virtual festival, single-block tickets are $7. Gold Passes with access to all in-person and virtual screenings are $75. Go to longislandfilm.com