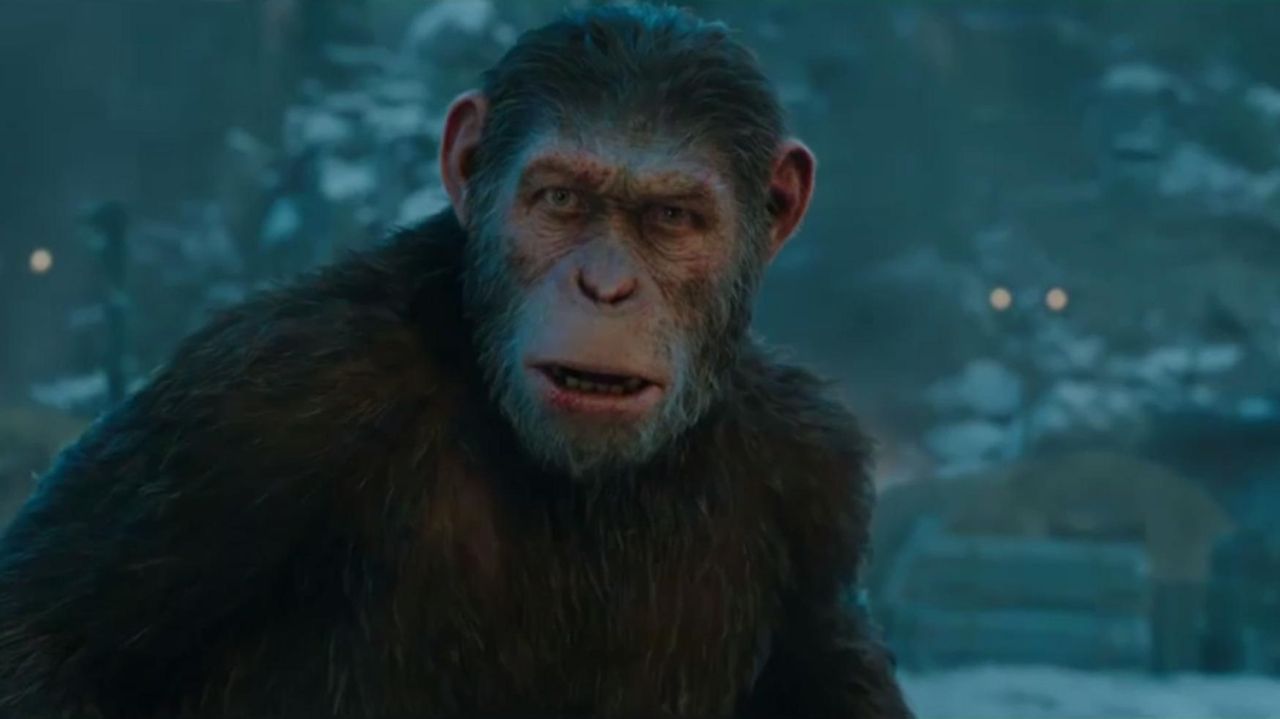 In the newest movie in the franchise, after the apes suffer unimaginable losses, Caesar wrestles with his darker instincts and begins his own mythic quest to avenge his kind. Credit: 20th Century Fox

PLOT The leader of an ape army comes face-to-face with his human opposite.

BOTTOM LINE A fittingly ambitious and bang-up ending to the re-booted “Apes” franchise.

What is it with ape movies and the Vietnam War? “Kong: Skull Island,” which came out in March, and this week’s new release “War for the Planet of the Apes” both echo that yearslong conflict and, very specifically, Francis Ford Coppola’s 1979 epic, “Apocalypse Now.” What’s the connection? And don’t say “guerrilla” warfare.

It may have to do with the horror and dehumanization with which Vietnam War remains synonymous. “War for the Planet of the Apes,” the final episode in a trilogy that began in 2011, envisions an all-or-nothing battle between increasingly intelligent apes and steadily devolving humans. With its themes of survival and extinction — plus a chilling reminder that Mother Nature looms largest of all — “War” is a summer blockbuster that packs an existential punch.

“War” features another star turn from motion-performer Andy Serkis as the alpha-simian Caesar, whose fellow apes are living in the woods and avoiding troops of armed humans. Caesar, a stern but peaceable chieftain, meets his mirror-image in the Colonel (Woody Harrelson), who leads a murderous militia-cum-cult bent on eradicating all apes (known in military parlance as “kong”). Joining Caesar on his mission to end the war are the gentle orangutan Maurice (movingly played by Karin Konoval), a zoo refugee nicknamed Bad Ape (an enjoyable Steve Zahn) and, by happenstance, a little human girl (Amiah Miller) whose mysterious lack of speech suggests a species in trouble.

This is a major improvement over the overwrought previous film, “Dawn of the Planet of the Apes.” The subtitles that translate the apes’ sign language still tend to dull the dialogue but, by contrast, Harrelson’s live-wire Colonel chews up the scenery. He’s clearly modeled on Marlon Brando’s Colonel Kurtz from that famous Coppola film: bald, lisping, clearly insane and given to morbid speeches about savagery and beauty.

In its pulpy way, “War for the Planet of the Apes” — vigorously directed by Matt Reeves from Mark Bomback’s screenplay — captures the zeitgeist. It presents a civilization gripped by fear, divided by hatred and hurtling toward utter, slate-wiping destruction. If this shiver-inducing piece of entertainment has a message, it’s the one spray-painted within the Colonel’s fortress: “Ape-pocalypse Now!”

Woody Harrelson had his big break playing a dumb but lovable bartender also named Woody on the sitcom “Cheers.” On the big screen, he hasn’t always portrayed such nice guys. “War for the Planet of the Apes” is his latest film in which he has been the bad guy. Here are four others.

NATURAL BORN KILLERS (1994) — Harrelson and Juliette Lewis starred in Oliver Stone’s drama as a pair of psychotic killers who become a media sensation. The story was penned by Quentin Tarantino.

RAMPART (2011) — Even though Harrelson was playing a cop, he was hardly what you’d call an honest one. Throughout the movie, his character — who’s also a racist and a misogynist — finds his career on the line after being caught on video beating a suspect.

SEVEN PSYCHOPATHS (2012) — In Martin McDonagh’s dark comedy, Harrelson played a ruthless gangster who has one redeeming quality — he adores his pet Shih Tzu. The gangster turns rabid when a dimwitted thief (Sam Rockwell) snatches the pooch.

OUT OF THE FURNACE (2013) — Not only was Harrelson’s backwoods character a coldblooded murderer with a complete disregard for human life, he was also a meth addict and a bookie.

The “Planet of the Apes” universe has been with us for nearly 50 years, ever since the first movie, starring Charlton Heston, debuted in 1968. Since then, the franchise has spawned seven feature films, as well as live-action and animated TV series.

How do all these projects stack up against each other? From worst to first, here’s a ranking of the “Apes” output:

10. PLANET OF THE APES (movie, 2001) Hard to fathom how a talented director like Tim Burton could make such an awful film, but the proof is in the viewing — long, boring, badly written, with an uninspiring Mark Wahlberg in the lead. Stay away from this one.

9. RETURN TO THE PLANET OF THE APES (animated TV series, 1975-76) Only 13 episodes of this series were broadcast, and it’s easy to see why. Chintzy-looking, pre-computer-era animation, combined with blah visuals and mediocre voice work, make these shows a chore to watch.

8. PLANET OF THE APES (TV series, 1974) Not bad at all, a program with decent production values, great Lalo Schifrin theme, and featuring Roddy McDowell from the original films. Low ratings due to competition from “Sanford and Son” caused it to be canceled after 13 episodes. Definitely worth a look.

6 (tie). BATTLE FOR THE PLANET OF THE APES (movie, 1973) and CONQUEST OF THE PLANET OF THE APES (movie, 1972) Budgets for the “Apes” movies obviously became smaller as the series progressed, with cheaper-looking sets and less interesting storylines. Neither of these films is truly bad or unwatchable (“Battle” is especially junky fun), but they don’t match up to the first three films in the series.

5. BENEATH THE PLANET OF THE APES (movie, 1970) Generally underrated follow-up to the original, starring James Franciscus as an astronaut who discovers a subterranean culture on the apes’ planet composed of humans with psychic powers.

4. RISE OF THE PLANET OF THE APES (movie, 2011) The first film in the rebooted trilogy is a solid effort showing how ape Caesar escapes from captivity and begins to establish a simian civilization in the forest. Andy Serkis is terrific as Caesar, and his final line — “Caesar is home” — is truly moving.

3. ESCAPE FROM THE PLANET OF THE APES (movie, 1971) Apes Cornelius and Zira flee Earth’s destruction and wind up in present-day Los Angeles. A clever satire of modern mores, this is easily the best of the “Apes” sequels.

2. DAWN OF THE PLANET OF THE APES (movie, 2014) The second film in the contemporary reboot is an exciting adventure, well-produced, directed and acted, showing Caesar and his followers gaining power.

1. PLANET OF THE APES (movie, 1968) The one, the only, and still the best. Filled with iconic lines — “Take your stinking paws off me, you damn dirty ape!” — and that never-to-be-forgotten ending featuring the Statue of Liberty. A bona fide classic.