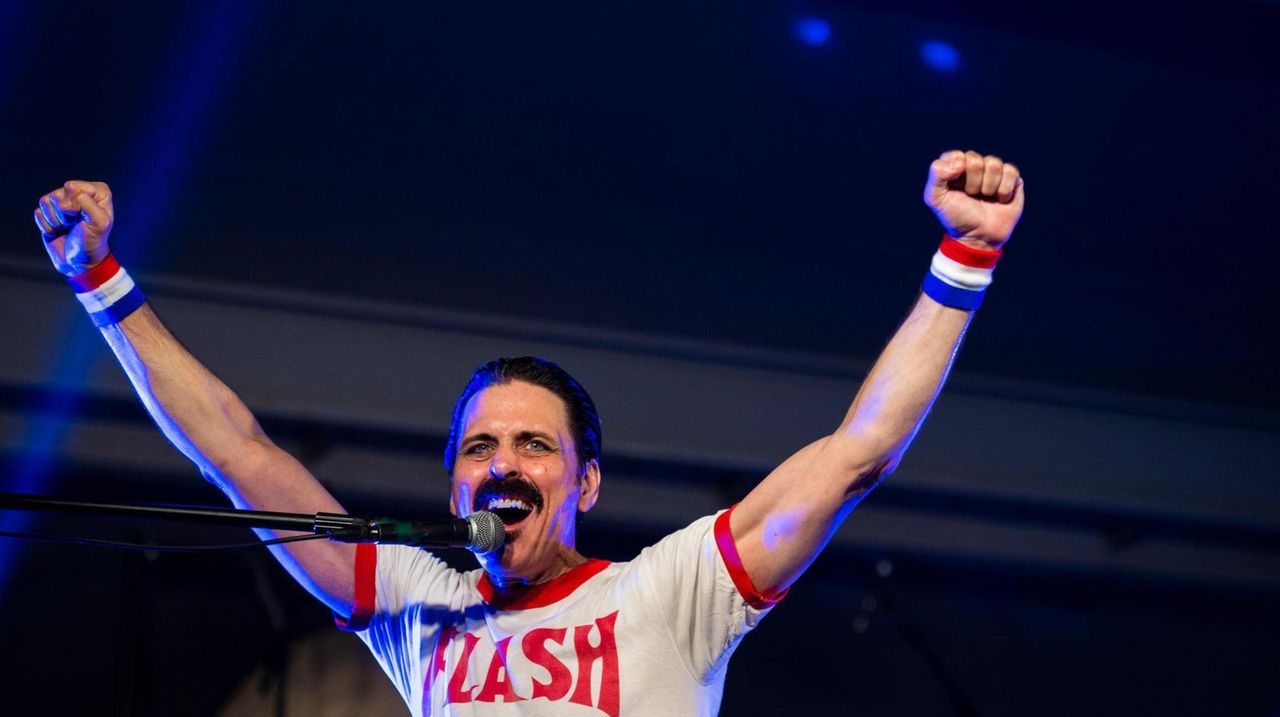 Despite a last-minute band change and the threat of rain, the Town of Hempstead’s first summer drive-in concert went off without a hitch on Saturday night. Due to the COVID-19 pandemic, more than 600 cars were socially distanced in the parking lot of Point Lookout Beach’s Town Park for its Independence Day celebration featuring a concert by Queen tribute band Almost Queen followed by a professional fireworks display.

“We were ready to get out. Like everybody else, cabin fever was setting in. This is a real big night out for us,” said Rod Dubinsky of West Hempstead, who was enjoying a preshow tailgate deli dinner with his wife, Helen, and daughter, Amanda. “The fireworks were a big draw and when Almost Queen got the nod they couldn’t keep us home.”

Billy Joel tribute band Michael DelGuidice and Big Shot were originally scheduled to play, but the rock outfit's lead singer was detained in Florida because of Gov. Andrew M. Cuomo’s mandatory two-week quarantine for those from that state who are visiting New York. However, this headliner swap didn’t bother Noelle Faro, 34, of Levittown and her boyfriend Keith Cotugno.

“We love Billy Joel but Queen is better,” she said. “Their music is a bit more rocking.”

Attendees were asked to stay in their cars to watch the show, which took place on a Town showmobile with two giant screens on both sides. Most people complied while a few sat in lawn chairs directly next to their cars.

“We were a little concerned, but we are confident everything will be fine,” said Steven Tock, 56, of Seaford, from inside his vehicle. “The drive-in concept is a good idea. We are having a picnic in our car!”

Anthony Rodgers, 17, of Franklin Square, and his girlfriend Zara Figliozzi, 18, of Garden City, had tickets to see Elton John at Madison Square Garden but that show was postponed, so they came to catch Almost Queen.

“We are trying to get some concerts in,” said Rodgers, who was nibbling on carrots, cookies and chips in his car. “We enjoy our rock music. It’s something to do.”

Supervisor Donald X. Clavin Jr. walked the parking lot greeting residents and worked with his COVID Concierge to make sure that everyone was taking precautions.

“The residents understand the protocols of safety,” he said. “They are taking it seriously and working with us.”

After the Town’s salute to local veterans, Almost Queen took the stage performing a fast version of “We Will Rock You,” followed by “Tie Your Mother Down” and “Killer Queen.”

“Good evening Hempstead. You can beep your horns, light your lights, let’s do this!” said lead singer Joseph Russo, who evokes late Queen singer Freddie Mercury both physically and vocally. “We are proud and happy to be ending our quarantine with you folks tonight.”

The band even dedicated “I Want to Break Free” to DelGuidice and Big Shot and thanked them for the opportunity.

“We are very humbled and thankful that we can be here in their place,” said bassist Randy Gregg. “They are our friends and we love those guys.”

After “Somebody to Love” and “Brighton Rock,” Russo performed Mercury’s famous a cappella call and response exercise, “Ay-Oh,” with concertgoers beeping their horns instead of singing.

A fireworks display by Special FX Wizard shot into the sky as the exhilarated band exited the stage.

“The experience was strange at first but we grew to love it,” said Gregg post-show. “Everyone seemed to really love ‘Radio Ga Ga.’ The horns didn’t stop honking.”

Russo added, “We were more excited than we’ve ever been to do this show and the crowd was excited as well. That’s what made the whole night a success. Everyone was happy to be here and we all rocked out together.”