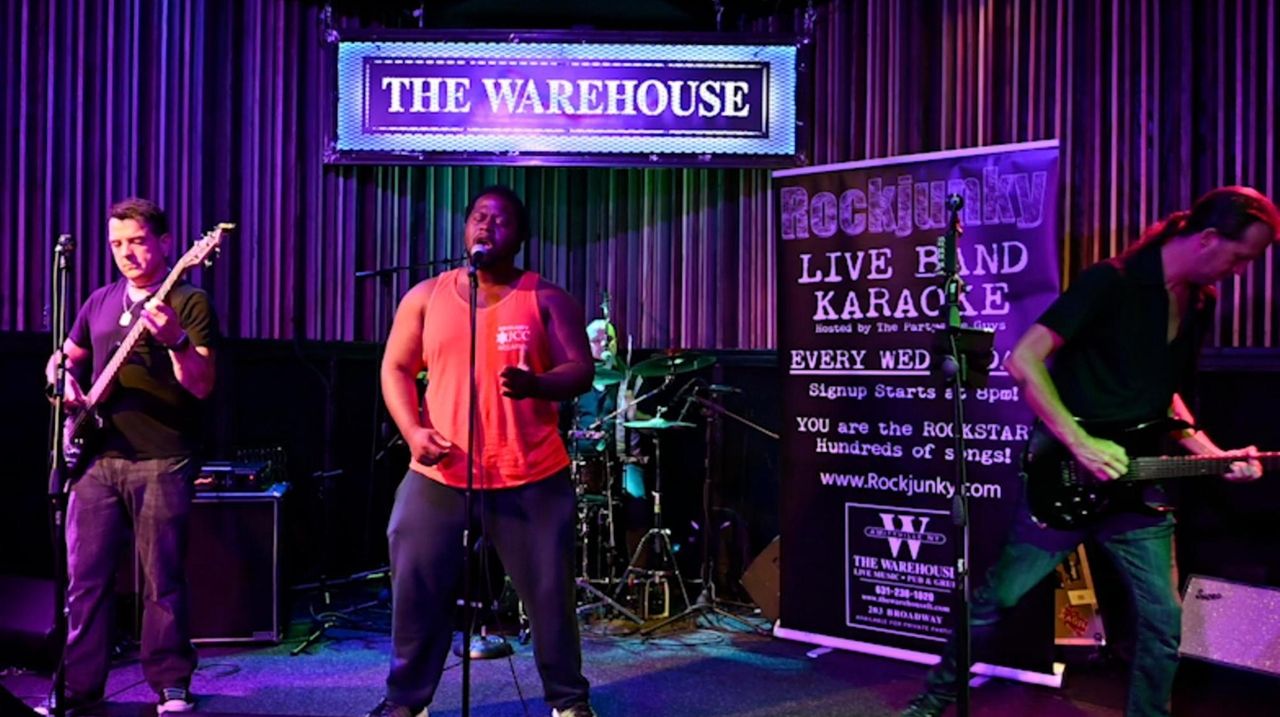 So you want to be a rock and roll star? Get to The Warehouse in Amityville on Wednesday nights where willing participants can take over lead vocals of a four-piece rock group at live band karaoke.

“We know all styles — R&B, hip-hop, disco, pop, rock, country, metal — you name it,” says Mike Skeedle, guitarist with the house band Rockjunky. “It doesn’t sound like a DJ playing. This is a true band experience. No autotune or backing tracks are used.”

Binders featuring over 350 songs are distributed throughout the venue for guests to peruse and pick out a tune. Emcee Chris Ross collects tickets with requests at a table on the side of the dance floor. When your song is called, go on stage and rock out.

“Performing with a live band is a rare opportunity,” says Ross. “It gives you a certain powerful feeling you can’t get from a record."

On a recent night, James Nawrath, 46, of Old Bethpage delivers a high-energy version of Young MC's rap classic, "Bust a Move," drawing praise from the crowd. “That’s one of my go-to songs,” he says later. “It was my main jam when I was younger.”

Although the concept is the same, pulling off a live band karaoke performance is different from traditional karaoke. There's a lyrics screen, but no bouncing ball pacing you from word to word.  One verse is shown at a time.

"You need to know the song — when to come in and when to drop out," Nawrath explains.

Meanwhile, at the next table, Aviva Sala, 49, of Fresh Meadows is trying to persuade one of her friends to sing. Jennifer Flaccomio, 47, of Selden gives in and belts out Journey’s “Lovin’ Touchin’ Squeezin’ ” to great success.

“I used to sing that song in a band so I cheated a little bit,” she says. “My friends got a kick out of it. I could see them holding up their phones.”

Sala is surprised by her friend’s performance. “I’ve never seen her in that mode,” she says. “It’s like getting a peek at a different side of her personality when she’s up there.”

Jumping onstage with a real rock band can be an intimidating task. But Ryan Kuntz, 32, who lives at Armed Forces Reserve Center in Farmingdale,  sings Tonic’s “If You Could Only See,” found it rather easy. “The band makes you feel very comfortable and at home,” says Kuntz. “They get you to roll with it and sing out.”

Sherry Buck of Lindenhurst was unsure of herself, but she knocks out Dusty Springfield’s “Son of a Preacher Man.”

“I’m a little bit rusty,” she admits. “But the band is very capable. You really feel supported up there.”

The band acts as a bit of a safety net because they can make adjustments in the moment.

“If the singer gets lost, we have three lead singers in the band so we can help guide them and make them sound better,” says Skeedle. “The key is to go up with the attitude of wanting to have a good time.”

Despite being in a bar, the crowd creates a fun environment for all types of singers who make an attempt.

“It’s a nice community that’s very supportive,” says Ross. “In all my years of doing this, I’ve never heard a boo.”

Rashan Whethers, 26, of Westbury, requests “Dream On” by Aerosmith, which was not on the playlist. After a quick center stage powwow, the band figures out the chords and goes for it.

“It’s a rush,” says Whethers, who comes off the mic with a big smile. “I love the adrenaline I get from the stage.”

“Once you get a taste it becomes an addiction,” she warns. “You just want to keep coming back for more.”

WHEN|WHERE 8 p.m.-midnight Wednesdays at The Warehouse, 203 Broadway in Amityville

ADMISSION No cover, must be 21 or older to attend.