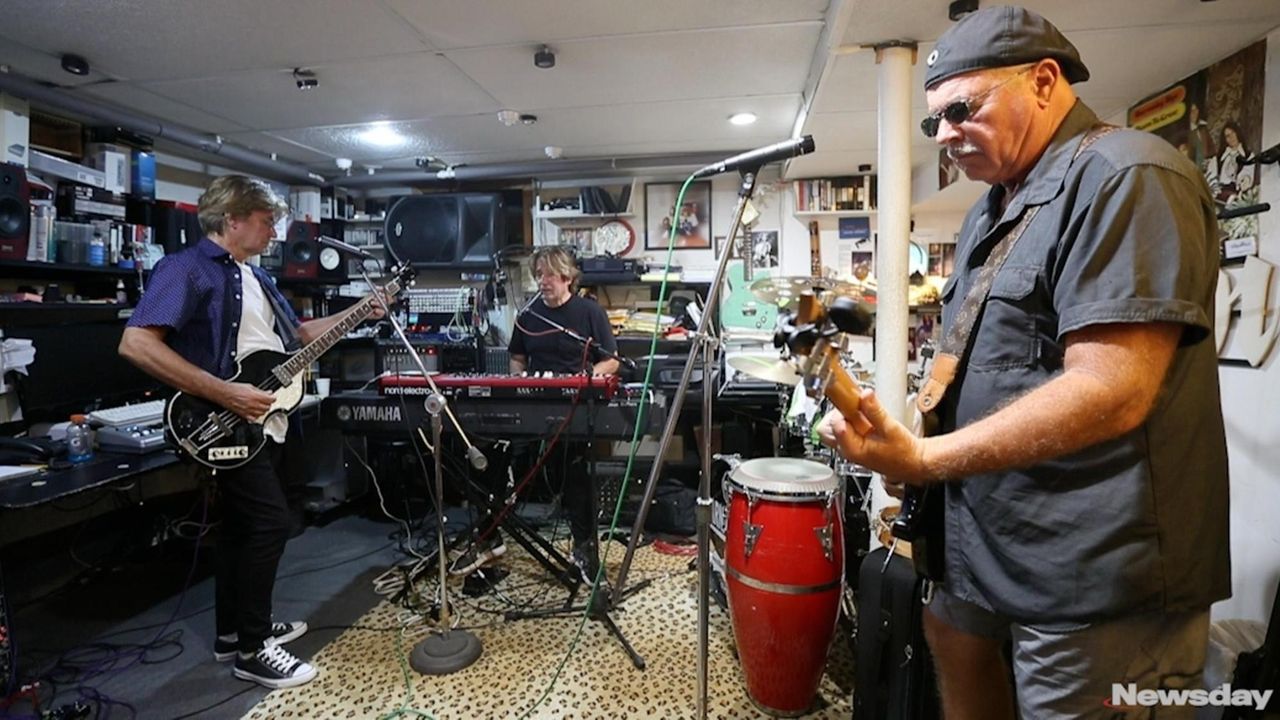 Barnaby Bye performed "Damn You Girl" and talked about their three upcoming performances at My Father's Place at The Roslyn Hotel on Aug. 3, 4 and 5. Credit: Michael Owens

It’s hard to top a royal wedding, but Barnaby Bye hopes that its upcoming three shows at My Father’s Place at The Roslyn Hotel will do just that.

On July 7, Barnaby Bye’s frontmen, twin brothers Billy and Bobby Alessi, attended the wedding of Lord Edward Spencer-Churchill, a relation of both Winston Churchill and Princess Diana, and German photographer Kimberly Hammerstroem at Blenheim Palace, the home of the Duke of Marlborough, in Oxfordshire, England. Though not quite as big as that other royal wedding earlier this year, Lord Edward’s guests at the birthplace of Winston Churchill included supermodel Kate Moss and actress Poppy Delevingne.

“It was such a special thing,” Billy Alessi says, laughing. “We were the surprise for the bride.”

Apparently, Hammerstroem was a big fan of The Alessi Brothers’ hit “Seabird” and her friends surprised her with the band performing the song at the rehearsal dinner reception.

“What?” shouts a tearful Hammerstroem, as the Alessis pick up their instruments. Soon, she and her friends are singing along with “Seabird.”

Billy Alessi says he was thrilled to be part of such a meaningful moment for the royal couple and is just as happy when he runs into fans of The Alessi Brothers and Barnaby Bye near his home in Cold Spring Harbor.

Barnaby Bye’s heyday was in the early ’70s, soon after the Alessis graduated from West Hempstead High School. That's when Atlantic Records co-founder Ahmet Ertegun discovered them after their run in the Broadway production of “Hair” and personally produced their debut album “Room to Grow.” Alessi says that when the band plays today he gets to see fans transported back to those days.

“It makes them feel young again,” says Alessi, who just turned 65 with his brother earlier this month. “Let’s be honest, none of us are spring chickens any more. But it makes them feel like they did when they first saw us. It takes them back.”

“It’s like when you ride in an old car and you think, ‘This is what it was like when I was riding with my grandfather,’” Alessi adds. “We are like riding in that old car.”

Barnaby Bye’s initial run didn’t last long, with The Alessi Brothers starting their own band, guitarist Peppy Castro — who was originally in The Blues Magoos — founding the band Balance, and drummer Mike Ricciardella co-founding the band Wiggy Bits. But when they play together, which they have been doing since 2008 off and on, they manage to conjure up those days.

“They are part of Long Island history,” says Michael “Eppy” Epstein, co-founder of My Father’s Place and Barnaby Bye’s manager in the ’70s when they released their second album, "Touch." “They are something we created on Long Island.”

Epstein says he wanted the band, which has been inducted into the Long Island Music Hall of Fame, to play the new My Father’s Place at The Roslyn Hotel shortly after it opened and was happy to see the response from fans. “The first show sold so fast, I had to add a second one immediately,” says Epstein, adding that both shows quickly sold out (when jazz pianist McCoy Tyner had to cancel his Friday, Aug. 3, show due to illness, My Father’s Place added a third Barnaby Bye show). “They’re great — just as good now as they were back then.”

Alessi says the band was surprised at the intensity of the response. “It’s not like the old days where we could always sneak some people in,” he says. “Now, we are really sold out to the hilt. I’ve had people saying they were going to fly in and see if they could pick up some tickets and I’ve had to say, ‘Do not fly in.’ ”

Barnaby Bye has been rehearsing a new set, which blends the Barnaby Bye classics with songs from The Alessi Brothers as well. “We’ll be doing what we do best,” he says. “We know what they want to hear.”

The interest in Barnaby Bye seems like part of a larger revisiting to the more innocent music from the early ’70s, as the new “Mamma Mia! Here We Go Again” movie brings back the music of Abba from that time period.

“People are craving the innocence of those times,” Alessi says. “It’s like going back to the early Beatles. . . . That’s why ‘Mamma Mia’ is going to be such a big, big hit and why Frankie Valli is selling out concerts across the country. Music is the one medium that can reach right into your chest and touch you. And when you hear a song, it can make you think, ‘Oh, my God, I know this feeling.’ ”