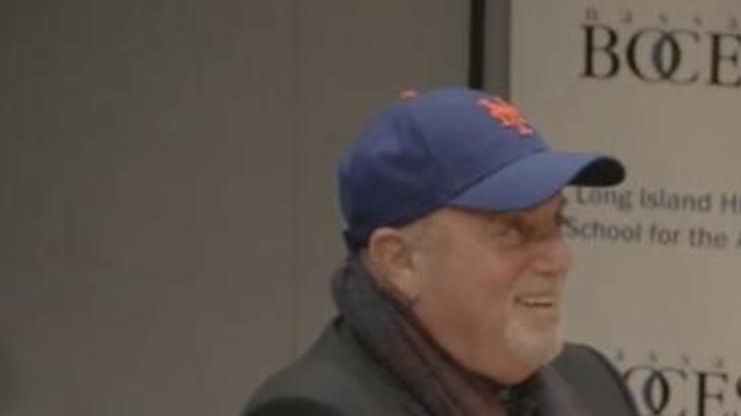 Nassau BOCES has renamed the Long Island High School for the Arts' building that houses its music and theater programs in honor of the mother of legendary musician and Long Island native Billy Joel. Dedication of The Rosalind Joel Conservatory for Music and Theatre took place on Tuesday, Dec. 19, 2017, at the art school's Syosset campus. Credit: Newsday / Yeong-Ung Yang

A building at the Long Island High School for the Arts was renamed Tuesday for singer-songwriter Billy Joel’s mother.

The newly dedicated Rosalind Joel Conservatory for Music and Theatre houses the performing arts programs at the Nassau BOCES school’s Syosset campus. At a small ceremony Tuesday, Joel said his mother “would have gotten a kick out of this.”

“She always encouraged younger people to follow their dream and taught me from a young age, ‘Yes you can,’” said Joel, who last year pledged $1.5 million to help save the school from closure.

Kassidy Rieder, a sophomore at the school, seemed unfazed during her performance of Ave Maria during the ceremony, but said afterward that she was “shaking” while performing in front of the rock ‘n roll icon.

“It means so much to me,” said Rieder, 15. “His songs have affected me through all stages of my life, and he’s done so much to keep the school open.”

Rieder was also one of about a dozen students who got to chat with the Joel before the ceremony. Joel tapped his foot and nodded in approval while students performed covers of songs. He answered questions about songwriting and offered his encouragement: “The more you write, the better you get,” he said.

Last year, the legendary musician and Long Island native pledged funds to help save the Long Island High School for the Arts, which had been facing closure because of dwindling enrollment and falling tuition revenue. Joel also held a master class for students and gave a $20,000 scholarship to a recent graduate and budding pianist to attend Berklee College of Music.

The Joel Foundation also announced a pledge for $1 million to Exploring the Arts, a nonprofit founded by singer Tony Bennett and his wife, Susan Benedetto, which will partner with Long Island High School for the Arts to increase student opportunities and enhance instruction during the next four years.

“Unfortunately in most public schools when there are budget constraints, the first programs to get cut are music and art. And I worry about the talented kids,” Joel said. “Where do they learn their craft? And it really needs to start at an early age, so this school provides that.”

Joel said his mother played a large role in his own musical development. She took him to shows in the city, at the Mineola Playhouse, the Westbury Music Fair and paid $10 every week for Joel’s piano lessons, encouraging him from the start.

“I saw a lot of friends of mine whose parents didn’t want them to be a musician,” Joel said. “She said, ‘You could do it. You can be a singer, a piano player, you could be in a band. You could be whatever you wanted to be.’”

Rosalind Nyman Joel, who died in 2014, was also the inspiration for several of the superstar’s songs, including the tribute, “Rosalinda’s Eyes,” which appeared on the multiplatinum 1978 album, “52nd Street. ”

Every Billy Joel song, ranked from No. 124 to 1With Billy Joel set to reopen the renovated Nassau Coliseum on April 5, the time seems right to take a look at his entire pop music catalog. Billy Joel talks new Coliseum, MSG showsBilly Joel will usher in a new era of entertainment on Long Island when he plays the first concert at NYCB Live's Nassau Coliseum in Uniondale.