Billy Joel, with his daughter Della, at his 100th show at Madison Square Garden on Wednesday. Credit: Bruce Gilbert

Billy Joel’s 100th show at Madison Square Garden, like the 99 before it, began with a capacity crowd on their feet, ready to forget about life for a while.

But they were treated to an extra special night, including a surprise appearance from Bruce Springsteen, who delivered “Tenth Avenue Freeze Out,” jumping on the piano and changing the lyrics to “when The Piano Man joined the band,” and trading verses with Joel on “Born to Run.”

“This is beyond my wildest expectations,” Joel said as his crew, who has worked with him for more than 40 years, and his wife Alexis and daughter Della raised a banner marking his 100th show to the rafters.

Nothing sparks Joel these days like a special guest. And he seemed determined to keep the energy level up after Springsteen's surprise, moving his usual closer "Only the Good Die Young" to follow "Born to Run." It became part of a dizzying show of eclectic strength from Joel and his band moving from "River of Dreams" to the Puccini aria "Nessun Dorma," delivered passionately by guitarist Mike DelGuidice, to the epic "Scenes from an Italian Restaurant" and, of course, "Piano Man."

Joel had already shaken up his set, opening with “Big Shot,” which is normally saved as an encore, and the smash “My Life.” He added two horn players to the usual trio in his section to tackle the rarely performed “Half a Mile Away,” which segued into “I Will Survive.” He dedicated "Don't Ask Me Why" to Della, telling the audience, "This is her favorite song."

Joel, who was in fine voice all evening, was stunning during “This Is the Time,” a song he chose because it was about the passage of time.

The show capped off a day of celebration for Joel’s milestone. Gov. Andrew M. Cuomo declared Wednesday “Billy Joel Day” in New York. The MSG Network offered a day of Joel-only programming until the show began at 8 p.m. And in a ceremony in the Garden lobby, Joel played the Steinway piano that will sit in front of the Garden’s main entrance off Chase Square next to a plaque memorializing Joel’s 100th show.

“What Billy Joel has accomplished could quite possibly never be accomplished again in any of our lifetimes,” said Madison Square Garden chairman and CEO James Dolan. “It’s that big.”

Cuomo hailed Joel as “the quintessential New Yorker” and congratulated the Hicksville native on his “breathtaking accomplishment.”

“That’s 40 years in this town in front of the toughest audiences on the globe,” Cuomo said, adding after a heckler started shouting at him, “as you heard from that gentleman there. You can’t fool New Yorkers for 40 years.”

With his 100th show, Joel currently holds the Garden’s records for most performances and most shows in a single run, a mark that hit 54 on Wednesday night thanks to his monthly residency, now in its fifth year. Both records are marked by banners that hang from the rafters alongside greats from the Garden’s other franchises — the Knicks, Rangers and Liberty — and are updated after each of Joel’s shows.

However, the Steinway piano, visible through a Plexiglas case, is a symbol of the magnitude of the 100-show milestone.

Joel’s friend, actor Chazz Palminteri, said the key to the Rock and Roll Hall of Famer’s longevity goes far beyond his music. 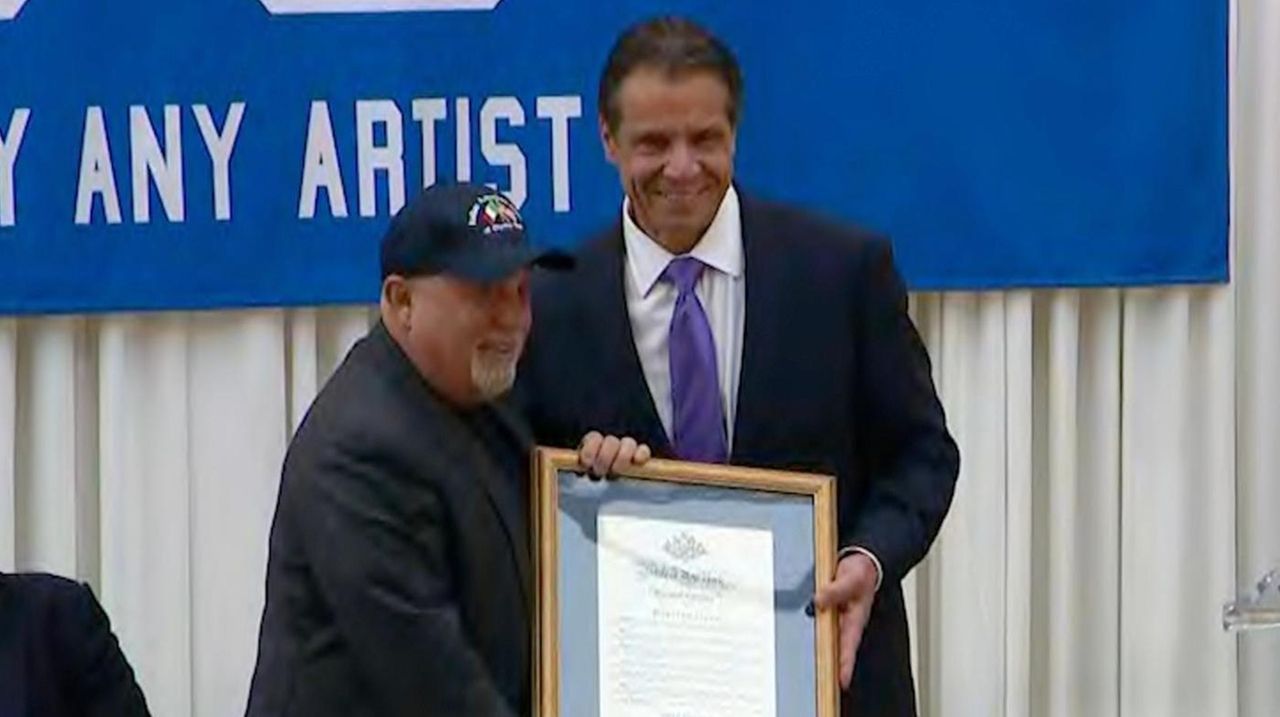 “People talk about his artistry, but he’s also a good man and that’s important,” he said. “It’s because of who he is and what he stands for. Billy is the working man.”

Joel told the ceremony’s crowd he thought his longtime agent, Dennis Arfa, was crazy when he proposed the idea of launching a Madison Square Garden monthly residency. Joel also thanked the more than 2 million people who have seen him at the Garden since 1978.

“My cup runneth over,” Joel said at the news conference. “I couldn’t think of a better way of peaking in my life other than this.”

Joel’s residency is already set to run through the end of 2018. He says he expects it to be extended into 2019, adding that he is enjoying himself.

“The audiences are great. The venue is great. It’s a world-class venue,” Joel told Newsday recently. “To have a residency there is a dream already. . . . The whole thing has just been one crazy, exhilarating night after another.”

Big Shot / Ode to Joy > My Life / The Entertainer / Vienna / The Downeaster ‘Alexa’ / Half a Mile Away > I Will Survive / Movin’ Out (Anthony’s Song) / Don’t Ask Me Why / This Is the Time / Allentown / New York State of Mind / Zanzibar / Sometimes a Fantasy / She’s Always a Woman / Tenth Avenue Freeze-Out (with Bruce Springsteen) / Born to Run (with Bruce Springsteen) / Only the Good Die Young / River of Dreams > Summer in the City / Nessun Dorma / Scenes from an Italian Restaurant / Piano Man // ENCORES: We Didn’t Start the Fire / Uptown Girl / It’s Still Rock ‘n’ Roll to Me / You May Be Right > Rock and Roll