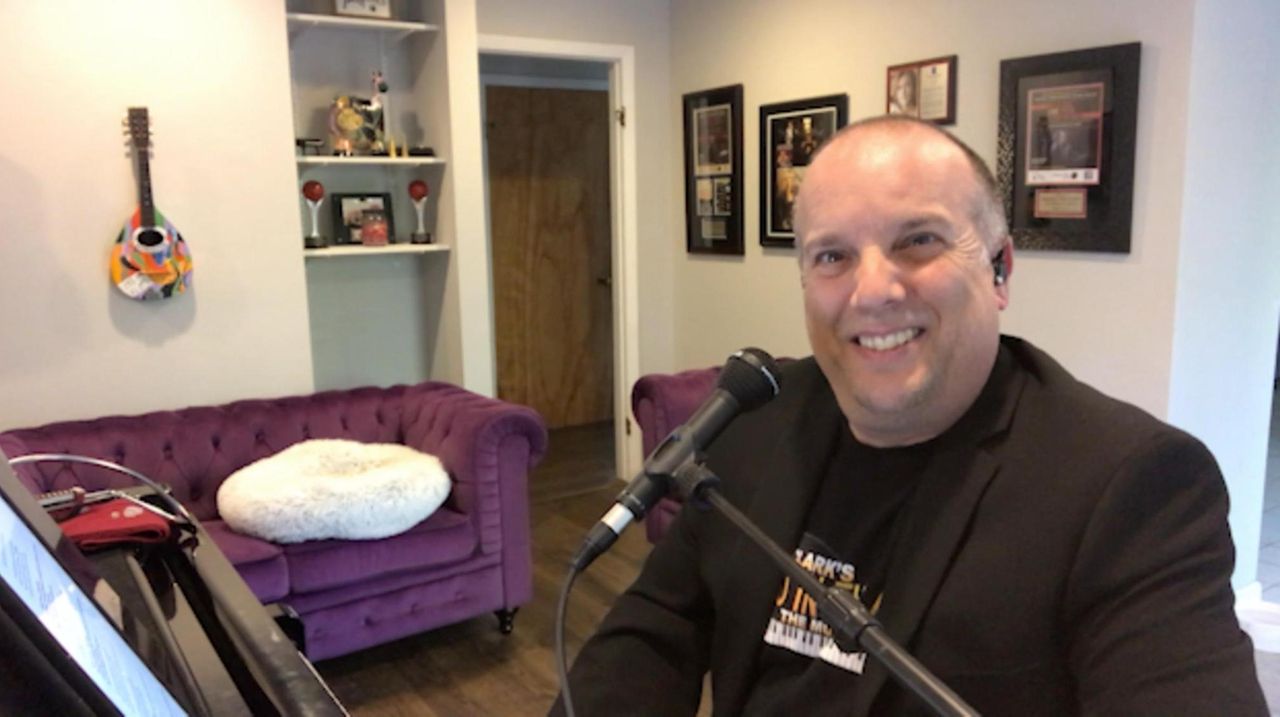 David Clark, vocalist for the Lords of 52nd Street and Billy Joel tribute band Songs in the Attic, performs “Sleeping With the Television On” from Joel’s 1980 album, “Glass Houses.” Credit: David Clark

In 1980, Billy Joel was in an interesting position. He had achieved massive multiplatinum success in 1977 with his fifth album, “The Stranger” and his 1978 follow-up, “52nd Street” won Album of the Year at the Grammys. Joel was 30 years old and at the top of his game.

However, a new decade was dawning in the music business, which was transitioning out of the punk-disco era and embracing new wave. What was a Piano Man from Long Island to do?

Enter “Glass Houses,” a bold release from Joel and his band that headed in a new direction. The album, released in March 1980 hit the top of the Billboard charts on June 14, where it remained for six weeks.

“We had about two-three years of playing in arenas and coliseums. I recognized that I needed to write bigger music,” Joel said in a video from The Complete Albums Collection. “Ballads don’t always fly that well in an arena. You need a big sound. I started writing harder-edged songs.”

“Billy was always about making a bit of a change. His thought was, ‘What do we do next without repeating?’ ” said Cannata. “The ‘Glass Houses’ songs were a little different. Billy took a chance and we all went with it.”

DeVitto adds, “On previous albums, like ‘The Stranger’ and ‘52nd Street,’ other musicians were brought in. ‘Glass Houses’ is just the band. There were less instruments on the album — no strings and other stuff. It leaves more space to do other things.”

“Glass Houses” is universally known as Joel’s rock album. Guitars were brought to the forefront along with Joel playing on a Yamaha CP-80 electric piano.

“It was time for a new sound. The Yamaha CP-80 was a little more aggressive,” said Cannata. “The instrument helped us move forward by getting funky, down and dirty.”

Surprisingly, the first single from the album, “All for Leyna,” wasn’t a hit, but has since become a fan favorite.

“I think the record company plans it that way,” said DeVitto. “They throw something out there to let people know Billy has a new album out then you hit’em with the big one.”

Current Joel band member and lead singer/pianist of Joel tribute band Big Shot, Michael DelGuidice said, “I think Billy was ahead of his time with ‘Leyna.’ It’s this manic song that keeps pushing and his voice is completely psychotic. That tune blows me away. The chorus is memorable right out of the gate.”

The next three singles became instant Joel classics that won permanent places in his live set.

“You May Be Right,” which hit No. 7 on the Billboard charts in the spring of 1980, saw Joel doing his best Mick Jagger impression as he sings with a snarl.

“Billy is a great impersonator. Some Mick Jagger might have rubbed off,” says Cannata. “But at the very end, he’s Billy Joel.”

By July 1980, Joel had the song of the summer with his third single off the album, “It’s Still Rock and Roll to Me,” which became his first No. 1 hit. It’s also the tune that gets him out from behind the piano and upfront on the mic in concert.

“It was time in his concerts to front some songs and entertain. He wasn’t just a singer/songwriter anymore, he was an entertainer,” said DelGuidice. “It’s his way of getting up close and personal with the crowd. People shake his hand and look right at him. It becomes more intimate, like a club. He has fun with it.”

In the middle of the song Joel screams out, “Alright Rico!” which is where Cannata comes in with his signature sax solo.

“Billy said, ‘Play something that people are going to remember in 20 years,’ ” said Cannata. “But, here it is 40 years later and we are still talking about it.”

The fourth single, “Don’t Ask Me Why” — an acoustic pop ditty with Latin-flavored percussion — cracked the top 20 reaching No. 19 and remains a modern adult-contemporary standard.

“ ‘Don’t Ask Me Why’ has this incredible singalong melody,” says Joel’s guitarist Tommy Byrnes, who has been in the band for 30 years. “Plus, it’s his daughter Della’s favorite song.”

Throughout the album there are elements of new wave influence that can be found on songs like the fifth single, “Sometimes a Fantasy,” as well as “I Don’t Want to Be Alone” and “Sleeping With the Television On.”

“When you are in a pop world and trying to make hits you have to follow the leader,” said DeVitto.

“I think Billy pulled it off tastefully,” says Joel fan Francis Christopher, 47, of Hicksville, who purchased the album on 8-track at age 7. “The music felt exciting and fresh but not in a way like they were trying to reinvent the wheel. It was an organic integration.”

“Phil taught us how to record in a studio,” says DeVitto. “He encouraged us to play the way we play live.”

Cannata adds, “Phil nudged us all in the right ways without really telling us what to do. When he stepped in the room, we played better.”

The cover of the album pictures Joel in jeans, leather jacket and biker boots with his arm cocked back clenching a rock in his right hand which he’s about to toss into a glass house.

“That’s actually the house I was living in at the time, which is right near Teddy Roosevelt’s house in Oyster Bay [Cove Neck],” said Joel. “I saw the photo and said people who live in glass houses shouldn’t throw stones. The name stuck — ‘Glass Houses’ — that works.”

Over 40 years, the album has sold more than 7 million copies and half of it still gets played at Joel’s Madison Square Garden residency.

“There’s no denying that the first side of that album is a force to be reckoned with,” says DelGuidice. “You can’t find better explosive radio tunes that are in-your-face. They really resonate.”

Joel's verdict? “This was probably the most fun album that I ever made. It happened fairly quickly, the band loved playing it and the audiences loved the material … We were on a roll!”

“Seeing Billy at Nassau Coliseum in 1980 at age 13 was my first big arena rock experience,” says David Clark, lead singer/pianist in the Lords of 52nd Street (which includes three of Joel's former band members) and Joel tribute band Songs in the Attic. “I remember he opened with ‘You May Be Right’ lighting the fire right away. My jaw dropped," says Clark, who grew up in Levittown and Lake Grove.

Nicole Gilbert, 53, of Mastic Beach recalls getting tickets to see Joel at Madison Square Garden as a grammar school graduation present from her Aunt Nancy, who took her on opening night at the Garden June 23, 1980.

“We were way up in the boondocks behind the stage but it didn’t matter where we sat because I was so excited,” says Gilbert, who still has her ticket stub and concert program. “Seats behind the stage at a Billy Joel concert are great because he plays to the back of the crowd.”

Linda Kopsick, 60, of Malverne was at MSG in 1980 as well with her brother Anthony and girlfriend Michele.

“The epitome of loving ‘Glass Houses’ was seeing it performed live,” says Kopsick. “The beats to the songs make it stand out. You can dance to a lot of them.” - David J. Criblez