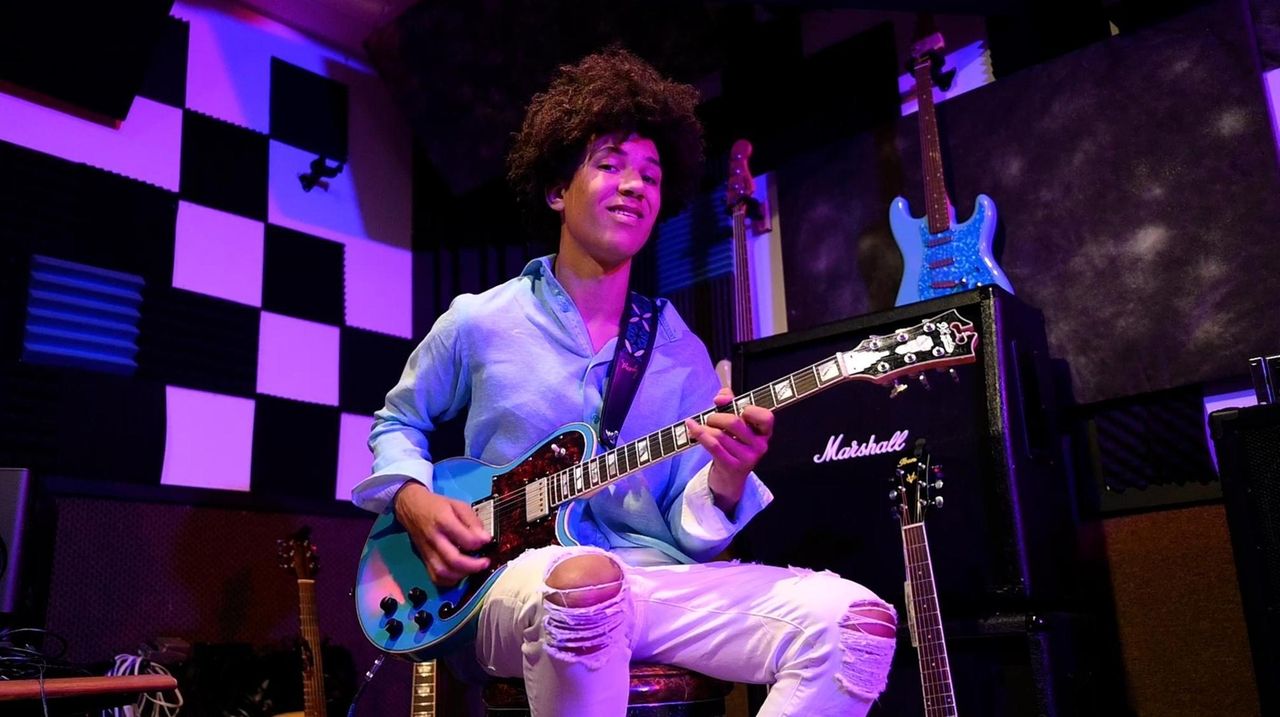 18-year-old guitarist Brandon "Taz" Niederauer of Dix Hills spoke with Newsday ahead of his performance with Friends of the Brothers, an offshoot band of musicians who backed up the Allman Brothers, at the Warehouse in Amityville on July 22.  Credit: James Carbone / James Carbone

There’s a long-standing tradition of famous guitarists who were raised on Long Island from Brian Setzer to Steve Vai to Joe Satriani. Brandon "Taz" Niederauer, 18, of Dix Hills is now in that conversation.

Playing guitar since age 8, Niederauer developed the nickname "Taz" at Rock-N-Roll U in Hauppauge because his hands are as fast as the Tasmanian devil. After performing in the pit during West Hollow Middle School’s production of "Little Shop of Horrors" in Melville, he landed an audition for the Broadway musical, "School of Rock" then spent over two years in the role of Zack drawing rave reviews.

Since then Niederauer has played in the orchestra of NBC’s "Jesus Christ Superstar Live in Concert" TV special, appeared in Spike Lee’s "She’s Gotta Have It" Netflix series, headlined Stephen Talkhouse in Amagansett plus My Father’s Place in Roslyn and even developed his own signature guitar — the Deluxe Brandon Niederauer Atlantic — from D’Angelico Guitars.

Following his graduation from Half Hollow Hills High School East in Dix Hills, Niederauer is headed to Yale University this fall while balancing his rising music career.

On July 22, Niederauer will be playing second guitar with Friends of the Brothers, a celebration of the Allman Brothers catalog with musicians who have played with the original members, at the Warehouse in Amityville.

"His talent is just skyrocketing. He plays better every time I see him," says Friends of the Brothers guitarist Andy Aledort, 65, of Sea Cliff. "Without exaggeration, I think he’s one of the best guitar players I've ever heard. There’s like magic dust on him. It can’t be denied. He’s really something else."

Niederauer spoke with Newsday's David J. Criblez about what he learned during his time in "School of Rock," working on his upcoming solo album debut and jamming on stage with legendary blues guitarist Buddy Guy.

What initially drew you to the guitar?

I just liked the sound and all the music I listened to had guitar in it. It always came easy to me. The guitar felt like an extension of myself at a time when I didn’t know how to speak for myself. I’m not the most comfortable person around other people, but when I hold my guitar it’s like I’m a different person for sure. Playing guitar is a happy place that feels like home to me.

What did you take away from your "School of Rock" experience on Broadway?

I learned a lot of discipline. You have to show up on time and do your work everyday. There were a lot of times where it got really hard but I had to pull it together and adapt to the changes. You realize as soon as those theater doors close, everyone forgets about whatever troubles they are having and engages in the play. It gives off a lot of joy and happiness. This was some people’s Christmas gift to come see our show. That thought made me bring it every night. I hope I did it justice. There are core values that I learned doing the show that I will take with me for the rest of my life.

How did you handle that kind of recognition?

At the end of the day, I’m just a normal kid and I still am today. No amount of attention is going to change who I am. I stay humble no matter what. But it is fun getting that attention.

You are going to be playing with Friends of the Brothers. Have you done this before? Is it rehearsed or on the fly?

I sat in with them a few times. We recently did four songs ("Dreams," "In Memory of Elizabeth Reed," "Blue Sky," "Statesboro Blues") at The Cutting Room in New York City. It’s pretty well-rehearsed but there are solo sections where you can do whatever you want. Overall it feels great because everybody is in it for the music.

How would you describe your guitar style?

Whatever I’m feeling inside I just put it through the strings. It gets magnified and comes out through the amps fully loud and ferocious.

Are you planning on doing any recording?

I’m working on an album now with producer Theron "Neff-U" Feemster (Eminem, Justin Bieber, Michael Jackson). He’s a talented guy who gets the most out of me. We’ve been working on it for a year in both Los Angeles and New York. We are going to have some stuff out soon hopefully. I’m singing, playing guitar and other instruments like bass.

What made you attend Yale at this point in your career?

When my mom let my dad buy me a guitar she made me promise that I wouldn’t stop doing good academically. She wanted to make sure that I wouldn’t become a lazy slob and play guitar all day. Getting into Yale is me going through with that promise.

What are you planning to study?

Definitely business economics classes for sure. But, I’ll definitely be doing music, maybe a double major. I haven’t really decided yet. I’ll be way more focused on academics.

I heard you jammed on stage with Buddy Guy. How did that happen?

I went to see Buddy Guy play at the Theater at Madison Square Garden after one of my "School of Rock" shows. He saw me in the crowd as a young kid and held my hand to put it close to his guitar to touch it. I whispered in his ear, "I can play." Ten minutes later, he said, "Where’s that kid?" All of a sudden his guitar tech hands me a guitar, I plugged into an amp and just played. It was a fun moment and an absolute honor.