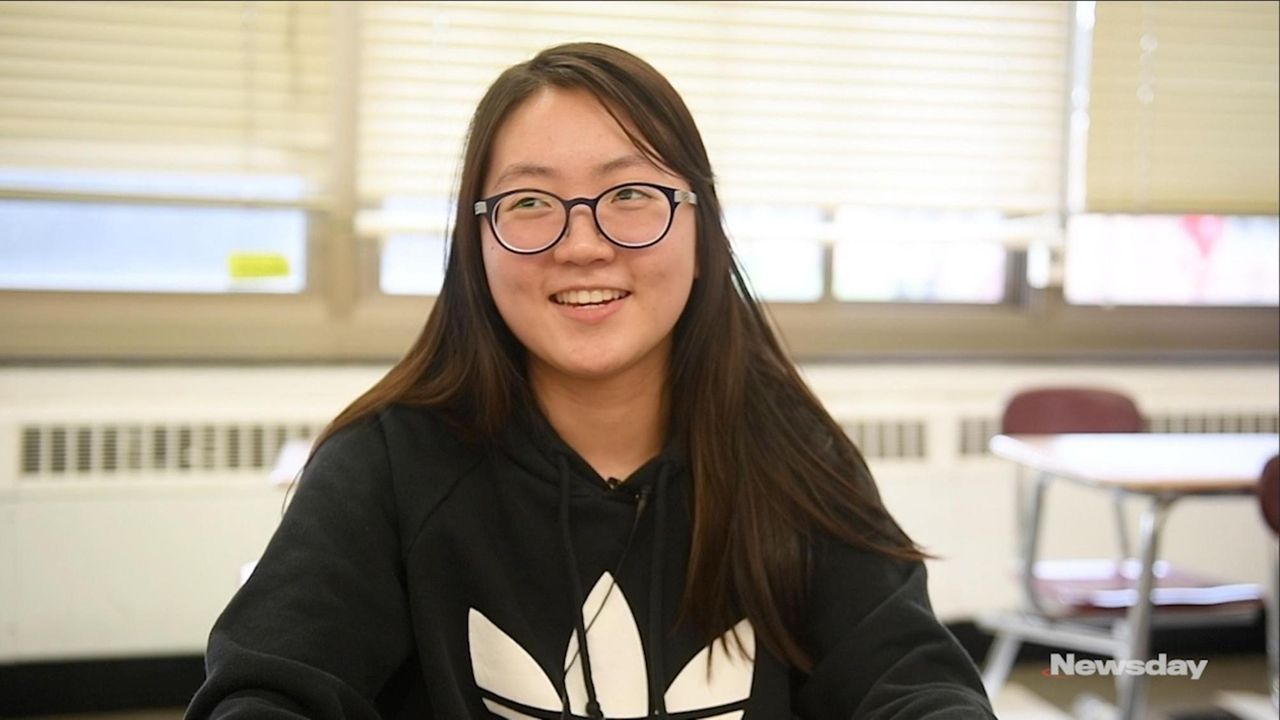 Syosset High School students on Monday talk about the impact the popular Korean boy band BTS has had on their lives, because of the group's messages of positivity and its embrace of Korean culture. Credit: Newsday / Thomas Ferrara

The members of BTS – RM, Suga, V, J-Hope, Jimin, Jungkook and Jin – are not household names across America yet. But their breakout success this year isn’t just changing the face of pop music, they are changing the idea of what it is to be a fan.

So far this year, the Korean boy band sensation has landed two No. 1 albums, a Top 10 pop single with “Fake Love” and an American tour that includes a sold-out show at Citi Field on Saturday, Oct. 6, making them the first Korean act to ever headline an American stadium. On Sept. 24, BTS, short for Bangtan Sonyeondan or Beyond the Scene, became the first Korean act ever to address the United Nations. And that is only the beginning for the group, in part, because the band has inspired its fans to want more as well.

“It took me a long time to hear music calling my real name,” RM said at the United Nations. “Even after making the decision to join BTS, there were a lot of hurdles. Some people may not believe, but most people thought we were hopeless. Sometimes I just wanted to quit. But I think I was very lucky that I didn’t give it all up. And I’m sure that I, and we, will keep stumbling and falling like this. BTS has become artists performing in those huge stadiums and selling millions of albums right now, but I am still an ordinary 24-year-old guy. If there’s anything that I achieved, it was only possible that I have my other BTS members right by my side, and because of the love and support that our ARMY fans all over the world make for us.”

Like a lot of fans in BTS’ ARMY, Hannah Lee, 17, a senior at Syosset High School, said she follows the group for more than just music.

“Going beyond that they’re good-looking and good at dancing and good at singing and good at everything that a K-pop idol should be, I think BTS is different because they speak about social norms,” she says, taking a break from a celebration of Chuseok, basically Korean Thanksgiving, by the school’s Korean Culture and Language Club. “They express themselves on issues for youth. If our generation is an army, they are basically the front line.”

She will be at the Citi Field show, luckily landing seats after she and four friends feverishly tried to connect to the website when tickets went on sale, even directly hooking her laptop to her router in hopes the internet connection would be faster.

“Their songs really convey strong messages about today’s generation,” said Serena Lee, 17, a senior at Syosset High and an officer in the Korean Culture and Language Club who will attend a BTS show at the Prudential Center in Newark. “Their new album, ‘Love Yourself,’ really hit home for me personally. I feel like a lot of teenagers struggle to really love who they are . . . That album is really what teenagers need these days.”

Serena, who is of Chinese descent, said that BTS helped her get interested in learning the Korean language and more about the culture, an interest that was cemented by a recent trip to South Korea. “I wanted to know more about the intricacies of the culture that went beyond the music,” she said.

She was a teenager in Yonkers when she first fell in love with K-pop, the catchy, mostly upbeat style of danceable pop that South Korea exports almost as much as electronics. “It was the super-tight choreography that caught my eye,” says Lanzot, 31, who is of Puerto Rican descent. “My parents would say, ‘You don’t know what they’re saying. How could you like this music?’ . . . But I would practice the choreography and try to learn the dances.”

Her interest in K-pop led her to learn Hangul, the Korean alphabet, and the Korean language, as well as more of the Korean culture. Lanzot is now the program officer of education for The Korea Society, helping teachers develop lesson plans about Korean culture and leading an annual trip of students to South Korea.

David Balsamo, Syosset High School’s world language coordinator said seeing a classroom filled with 40 or so students after school for a meeting of the Korean Culture and Language Club is hard to ignore.

Joshua Lee, 17, a senior at Syosset High and vice president of the Korean club, isn’t exactly a fan of BTS’ music. But he is a fan of what their success has meant for him in terms of getting people to better understand his heritage.

“For so long Asian culture has been stigmatized,” said Joshua, adding that previously many would just wonder if he was Chinese or Japanese. “I feel like through BTS, stereotypes and prejudices can be wiped away, showing that Koreans may be different, but it’s very much an enjoyable, good culture.”

Members of BTS’ ARMY, what fans call themselves, say they also want to change the stereotypes of how fans are portrayed.

“The media portrays us as obsessed,” said Michelle Santos, of the Bronx, a member of the BTS fan group, One in an Army. “We can do much more than show up somewhere and make noise. We decided to show what ARMY can do aside from buy albums or make sure BTS is heard.”

Santos is spearheading an effort to clean up the area around Citi Field before the Oct. 6 show and to collect food for City Harvest, as well as blankets for the homeless.

“We want to show we have compassion and love,” said Santos, 31, who is originally from the Dominican Republic, but has learned to speak Korean thanks to fellow BTS fans. “BTS was always showing us: ‘You have the power to change yourself. You have the power to build a better world. You have the heart to bring about change.’ That’s what we’re trying to do.”

Erika Overton, a Brooklyn native who is also part of One in an Army and will be at the Citi Field show, said the group regularly works to help the less fortunate around the world. This year, her group raised money to donate 34 water filters to schools in Tanzania through Thirst Relief. They donated more than 200 meals to Syrian refugees through Syria Care and raised nearly $3,000 for Medical Teams International for medications and supplies.

“It’s an effort to give back what we have gotten from them,” says Overton, 38, who is African-American, but learning to speak Korean. “It dawned on us that there is an enormous number of people around the globe that have been helped by BTS. We could use that in a charity campaign. Their impact on us goes so much further than just music. It shows what we can do working collectively. It helps us understand the potential of creating the world we want to be in. And it has us thinking, ‘What can we do next?’ ”

THE RISE OF BTS

JULY 13, 2014 BTS plays “Show and Prove,” its first American concert. The free show for 200 fans was at The Troubadour in Los Angeles, where the group was living to learn more about hip-hop.

JULY 16, 2015 BTS plays its first New York show at Best Buy Theater, (now PlayStation Theater) which went over well even though, according to several reports, it was cut short due to death threats against RM.

JUNE 24, 25, 2016 BTS closes out KCON at the Prudential Center in Newark, its largest American show to that point.

OCT. 10, 2016 Group releases “Wings,” which debuts at No. 26 on Billboard’s album charts, making it the biggest album for Korean artists at the time.

MARCH 23, 24, 2017 BTS starts the American leg of its “Wings” tour with two sold-out shows at the Prudential Center.

MAY 21, 2017 BTS appears at the Billboard Music Awards and wins Top Social Artist, to the screaming delight of BTS fans during the live broadcast.

MAY 18, 2018 BTS releases “Love Yourself: Tear,” which debuts at No. 1, becoming the first album from a Korean act ever to top the Billboard charts.

AUG. 24, 2018 BTS releases “Love Yourself: Answer,” which also hits No. 1 on the Billboard charts, on sales of 141,000 copies – the third-highest sales week of the year, behind Justin Timberlake and Shawn Mendes. – Glenn Gamboa

To most people outside South Korea, K-pop is simply shorthand for “Korean pop.” Most Americans first learned about it in 2012 when Psy’s “Gangnam Style” video went viral and reached No. 2 on Billboard’s Hot 100 chart, as people around the world tried to do that horsey dance. And now most people link it to BTS, which is enjoying a historic breakthrough year that includes its show at Citi Field.

However, neither BTS nor Psy fit into the traditional definition of K-pop, lightweight pop delivered by "idols," groups specifically developed by record companies to rack up hits through their singing, dancing and flashy videos the way Backstreet Boys and New Kids on the Block did in their heydays. BTS tackles weightier topics than most of their contemporaries, and its global success has brought more opportunities, like landing Nicki Minaj as a guest on the new single, “Idol,” and American award show appearances.

There is an actual K-pop sound that was built by groups like Big Bang, Girls’ Generation and 2NE1 – upbeat dance music cut with a bit of playful hip-hop. While the Western world essentially moved on from the late 1990s domination of the Spice Girls and NSync, in South Korea, they continue to chase that happy pop sound. As big as BTS has been in 2018, iKON and BlackPink have hits that have been as big or even bigger this year in South Korea. — Glenn Gamboa