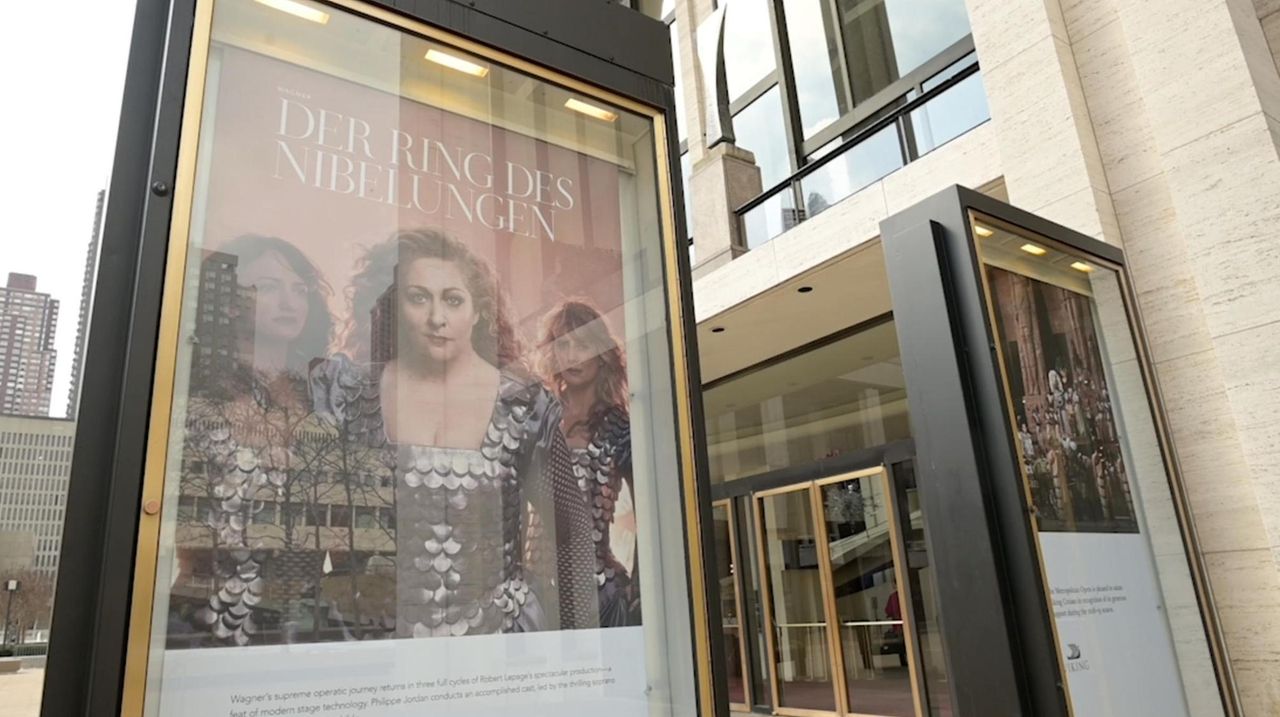 Christine Goerke, a singer from Medford, is starring as Brunhilde in the upcoming production of "The Ring" cycle at the Metropolitan Opera. Credit: Corey Sipkin

There was never opera playing in Christine Goerke’s household when she was growing up in Medford.

“I heard Johnny Cash all the time,” says Goerke, whose father, Richard Goerke, was a fan.

But one day, when she was about 13, she stumbled upon an episode of PBS’ “Great Performances,” watching on the little black-and-white TV in her bedroom. Her father peeked his head in and asked what she was watching.

And so it began. Goerke watched the whole thing — the rarely performed “Francesca da Rimini” — reading along with the subtitles and fascinated by the costumes, drama and passion. And then nothing — she didn’t think much about opera for years after that.

There isn’t a standard trajectory to the heights of opera stardom, but if there were, this wouldn’t be it. Goerke’s entry into this world seems accidental, yet she’s become one of today’s most sought-after sopranos. This month, she stars as Brünnhilde, arguably the world’s most famous opera character of all time — you know, the one with the spear and helmet — in Richard Wagner’s ”Ring” cycle, a four-opera mega-production playing at Lincoln Center’s Metropolitan Opera through May 11. Goerke, who appears in three of the four operas, makes her Met debut in the role on March 25 in “Die Walküre” (“The Valkyries”), followed by a live broadcast in movie theaters March 30.

Not bad for a girl who grew up never knowing she could sing.

You know what they say about best-laid plans

Goerke, 49, played clarinet in her high school band, and had no plans to sing. But that changed thanks to one patient dad, and a select group of teachers who fueled and focused her passion in unexpected ways.

Teachers like Peter Randazzo, of Nesconset, a beloved instructor who led the Patchogue-Medford High School band for 33 years.

“He made me fall in love with music,” says Goerke, on a recent morning sitting in the green room, backstage at the Met. “He was funny, loud, boisterous and made everybody love music so much that they ended up creating a second ensemble because so many kids wanted to be involved.”

Randazzo remembers Goerke as your typical band geek, with something extra.

“She had personality,” he says. “She was big, loud and could tell a bawdy joke like nobody else.”

Under his guidance, Goerke blossomed as a musician, and dreamed of becoming a high school band teacher. After graduating, she attended SUNY Fredonia, where instructors heard her voice in a sight-singing exam. They urged her to try out for choir.

“I said, ‘Nooo, I’m a clarinet major,’ ” she recalls. Classmates convinced her, and she got in. “I started thinking, ‘OK, maybe there’s something to this.’ ”

Goerke left Fredonia and attended Suffolk Community College, earning money by singing at churches and funerals. She eventually auditioned at Stony Brook University as a performance major. It was affordable, and a quick commute up Nicolls Road from her family home.

Standard procedure was for undergraduates to take voice lessons with a grad student, while grad students studied with professors. “I was pushy as all get-out,” she said. Goerke marched into the office, requesting she be assigned a music professor. “They said, ‘No.’ And I said, ‘OK, I’m not going to lessons.’ ”

She got a D that semester.

Goerke chuckles looking back. “That wasn’t the right choice, but … go me!” she jokes.

Elaine Bonazzi, an acclaimed mezzo-soprano and faculty member, later agreed to teach Goerke, and they worked together for more than a decade. After being accepted into the Met’s prestigious Young Artists Program, she called Bonazzi nearly every night in tears, convinced she didn’t belong. When Bonazzi died in January, Goerke wrote on Facebook, “I would not be who I am today without her.”

So how was Dad with the switch from music teacher to opera singer?

“Mystified,” she admits. But he asked only one question: What if it doesn’t work out? She told him she was giving herself five years to make it, then she’d get her teaching degree. The rest of their conversation went like this:

That unadulterated faith in her meant everything.

Goerke made her Met debut in 1995 in the ensemble of John Corigliano’s “The Ghosts of Versailles.” She went on to play title roles in Puccini’s “Turandot” and Strauss’ “Elektra,” among others, earning a reputation as a down-to-earth diva.

To play a dramatic soprano in Wagnerian operas, of course, means she’s no pushover. That’s clear when she discusses arts funding in schools. “Music is associated with higher learning and math — it’s the first foreign language we learn,” says Goerke, who lives in New Jersey with her husband, Jim Holloway. “It makes me crazy that it’s become something so easily discarded.”

The issue is especially important now that the couple has two daughters, ages 12 and 9. “We’re taking the arts out of schools, and we’ve told an entire generation of young adults it’s not that important,” says Goerke.

She knows it’s vital. When Randazzo retired in 2012, Goerke returned to surprise him at his final concert. Randazzo gets choked up as he recalls that evening. Goerke sang, having warmed up in a room at the other end of the school.

“It’s a Long Island high school, it’s gigantic,” he says. But Goerke’s warm-up was heard “way back down to the auditorium, through closed doors,” he says. “So you know the power of that voice.”

Lasting more than 15 hours, Richard Wagner’s “The Ring of the Nibelung” (aka the “Ring” cycle) — a series of four operas based on Norse and German myths — tells an epic tale of a family of gods, mortals, warriors and monsters fighting over a stolen cache of gold that’s shaped into a ring. Its cult-like following is legendary.

Not into opera? You’ve still likely been exposed to the power and influence of this juggernaut, from sources like “Apocalypse Now” (Wagner’s stirring “Ride of the Valkyries” music blasts out of helicopter speakers as soldiers attack a Vietnamese village), “Game of Thrones” (it packs the same binge-worthy passion, violence and depraved family relationships) and “The Lord of the Rings” (J.R.R. Tolkien insisted the “Ring” had no bearing on his work, but, dude, there are only so many magical rings, swords, dragons and such we can endure before drawing comparisons).

Medford-raised soprano Christine Goerke, who begins her run as Brünnhilde in "Die Walküre" at the Metropolitan Opera on Monday, believes opera too often gets a bad rap.

“Opera is surprising,” she says. “You don’t have to show up in a ball gown and tux. Come in jeans and sneakers. Check it out.”

The Met’s “Ring” cycle features acrobats, high-tech projections that ripple and react to motion onstage, and “The Machine,” a mammoth, 90,000-pound set made of 24 planks that rotate to form different shapes and scenes.

“It’s not what you think,” says Goerke. “It’s not your grandmother’s opera.”

(For a full schedule, visit metopera.org.)