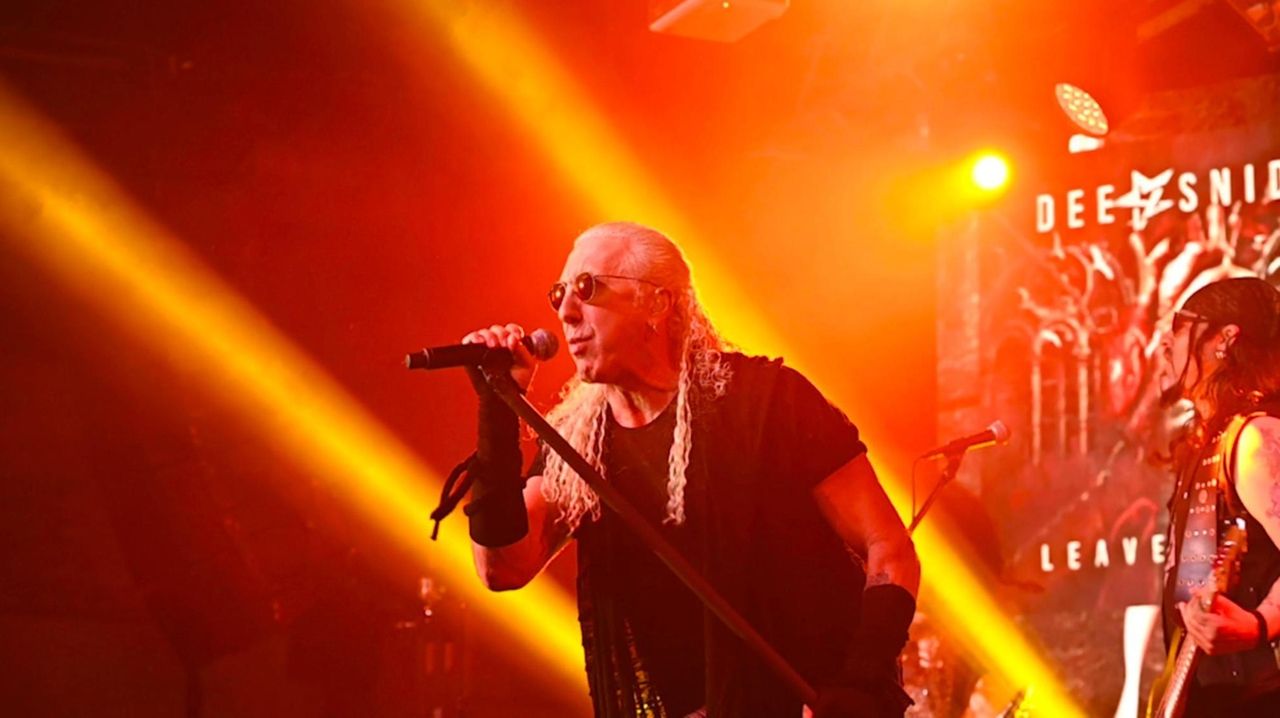 Singer Dee Snider is back in touch with his Long Island roots, performing a June benefit concert at Stereo Garden in Patchogue, which was filmed for an on-demand streaming event. Newsday's Marissa Sarbak reports.  Credit: Newsday / Steve Pfost

Dee Snider was planning to retire. After more than four decades behind the mic, the former lead singer of Twisted Sister decided in August 2019 that he had enough.

"I flew my entire family over to Switzerland for this show I was co-headlining with Alice Cooper," says Snider, 66, who grew up in Baldwin. "I figured if it’s going to end, this is the way to end it in front of 50,000 people standing next to my hero with my family cheering. That’s it, I’m done. Then life happened."

When the pandemic hit last year something changed inside him.

"By mid-2020, the world made me realize that I wasn’t done on many levels. Being shut down by COVID, the state of politics in the world and social media all played a part in my return to music," says Snider. "I believe in standing up and making your voice be heard. But not everybody has that strength, platform or ability. Then I realized — that’s me, I’m that guy. I’ve been given that voice, that platform — people look to me to say something. I figured I guess my job is not done."

Enter his new album, "Leave A Scar," which was released this week, marking the first time since the ‘90s Snider wrote his own lyrics. His first statement was the single, "I Gotta Rock (Again)" yet another signature rock-themed anthem following in the footsteps of his past classics "I Believe in Rock 'N' Roll," "You Can’t Stop Rock 'N' Roll" and "I Wanna Rock."

"I’m the master of the understatement," says Snider with a smile. "People were losing their minds during the pandemic. You can only sit and binge watch TV shows for so long. You want to get back out there and rock. This is not just me saying, ‘I Gotta Rock (Again)’ but for everybody who has been waiting this long to get back to business as usual. We all gotta rock again!"

Perhaps Snider is best known for the Twisted Sister song, "We’re Not Gonna Take It," which helped to inspire a generation to fight for what they believe in.

"At the time I thought I was making a very personal statement but it turned out to be a worldwide statement for every kid in every house in suburbia," says Snider. " ‘We’re Not Gonna Take It’ will be here long after I’m gone. It’s practically a folk song now."

In addition to reconnecting with his music, Snider also got back in touch with his Long Island roots by hosting a June benefit concert at Stereo Garden in Patchogue, which was filmed for an on-demand streaming event. Proceeds were donated to Melissa’s Wish, a nonprofit organization from Kings Park that financially helps caregivers assisting those afflicted with a serious illness, injury or end-of-life event.

"I kept mentally thinking, ‘Can I do this?’ because it had been two years," says Snider. "But when I got out there, I realized that is what I do."

Back in the day, Twisted Sister ruled the clubs on Long Island like Speaks in Island Park, the Mad Hatter in Stony Brook and Hammerheads in Levittown.

"People used to call us the Demolition Squad because we would open up for bands and steal their audience," recalls Snider. "We did 2,000 club shows. My hair still smells like beer and smoke to this day."

Even though Twisted Sister is no longer together, Snider still remains close to his bandmates.

"Twisted Sister is some of the greatest memories and moments in my life," says Snider. "The guys in the band are my best friends. We are brothers, or 'sisters' as we like to say, for life."

However, Snider insists that he’s not an artist who leans on his catalog because his focus is on the future.

"I can’t commit to living in the past. I’m more excited to play brand new material than I am about stuff I did 40 years ago that sold 5 million copies," says Snider. "It’s been great to see younger people appreciating me not so much for my legacy but what I’m giving them today."

Nicholas Fernandez, 22, of Bohemia got out of work and rushed over to Stereo Garden to get in line for Snider’s general admission show by 4 p.m.

"I wanted to be the first one in line. I’m just happy he chose to play here on Long Island," says Fernandez. "I love Twisted Sister, but I like his solo stuff more. His song ‘For the Love of Metal’ is my favorite because it touches my heart. He’s my childhood hero."

Unlike his peers, Snider’s vocals have gotten stronger with age. Perhaps this is a reflection of his lifestyle choices.

"I don’t drink, do drugs or smoke. I’ve always been into health and fitness," says Snider. "In many ways I pulled off the road and didn’t do the extensive touring that people do forever and suffer from it. Over the last couple of decades I’ve done a limited amount of shows and haven’t really tortured my voice. It’s actually gotten some rest."

Outside Stereo Garden the line grew longer extending all the way down the sidewalk where fans are bustling with excitement to see Snider sing.

"Dee is a monster, man," says Kevin Huggins, 59, of Bay Shore, who has been a fan since high school. "He’s got those killer vocal chords."

When Snider takes the stage, a collective chant of "DEE! DEE! DEE!" gets hurled at him from his hometown crowd draped in denim and leather. With COVID restrictions lifting, the place is packed and masks are being cast aside.

"It was a strange but awesome moment to return back to the stage," says Snider looking back at the show. "It was supposed to be a COVID safe show with a couple of hundred people remaining socially distant. But when it got to the night of … all bets were off!"

Michelle Voye, 39, of East Meadow was excited to be at her first show in a year and a half.

"It’s wonderful to get out after all the restrictions and lockdowns just to come out and have a good time with our friends," she says. "It’s a nice excuse to dress up and get some clothes out of the back of the closet. No more sweatpants. It felt really good."

Brigitte Alexander, 57, of Patchogue adds, "We all want to hear him play, ‘We’re Not Gonna Take It’ because right now we need that."

When Snider launches into his signature song from 1984, the crowd explodes.

"This is what I dreamed of and what I’ve lived for. The audience lights up at the speed of sound," says Snider. "When you go into a song they love, you can see as the sound registers, the smiles and the hands go up. It’s like a wave that’s so fast from front to back."

Being back on Long Island has been quite a trip for Snider blending family with his career.

"It’s a complete rush of emotions — a very intense time," says Snider. "I hadn’t seen my dad in over a year and a half as well as my grandkids and siblings. The whole trip has been a whirlwind."

On stage Snider is a beast delivering new metal songs like "Down But Never Out," "Time to Choose" and "Before I Go." Off the stage, he’s a family man married to his wife Suzette for over 40 years with four children. However, he’s very self-aware of his duality.

"It is two sides of the same coin. The coin doesn’t and couldn’t exist without both sides," says Snider. "On stage, I’m allowed to get it out — act out that anger and frustration. It’s not a stage act as much as another side of the personality that’s smart enough to say, ‘OK, it’s safe if you release it here.’ "

As the set list winds down, the energy keeps rising. Fernandez made it to the front row and he’s head banging in his denim vest covered in band patches. Snider closes out the show with what he calls "the international heavy metal anthem," a cover of AC/DC’s "Highway to Hell." It’s clear he has come to a conclusion.

"I don’t think I can say I’m done with music," says Snider post-show. "I think I’ll wind up dying on stage before I surrender."

Aside from rocking the mic, Dee Snider is taking his career down alternative avenues. Here are three projects he currently has brewing:

Snider will write, co-produce and direct a horror film based on the 1982 Old Westbury diner invasion.

“I used that as a starting point then I threw in an x-factor that would have changed the event,” says Snider. “It is brutal, intense and dark.”

Growing up on the South Shore, Snider penned a novel on his experience dealing with gangs in Nassau County.

“There was a high school fraternity system which allowed these fraternities to wander the hallways wearing their colors,” says Snider. “They were just essentially gangs that were legitimized by wearing Greek letters. The dorks walked around in fear of getting beat up by them at all times.”

Snider will play the title role in a new musical that mashes up rock songs with opera wrapped into a storyline about a rock star that disappeared only to become a station master in Europe.

“We have investors already and we are cautiously optimistic,” says Snider. “The goal is to get this to the Broadway stage then ultimately take it on tour.” - DAVID J. CRIBLEZ