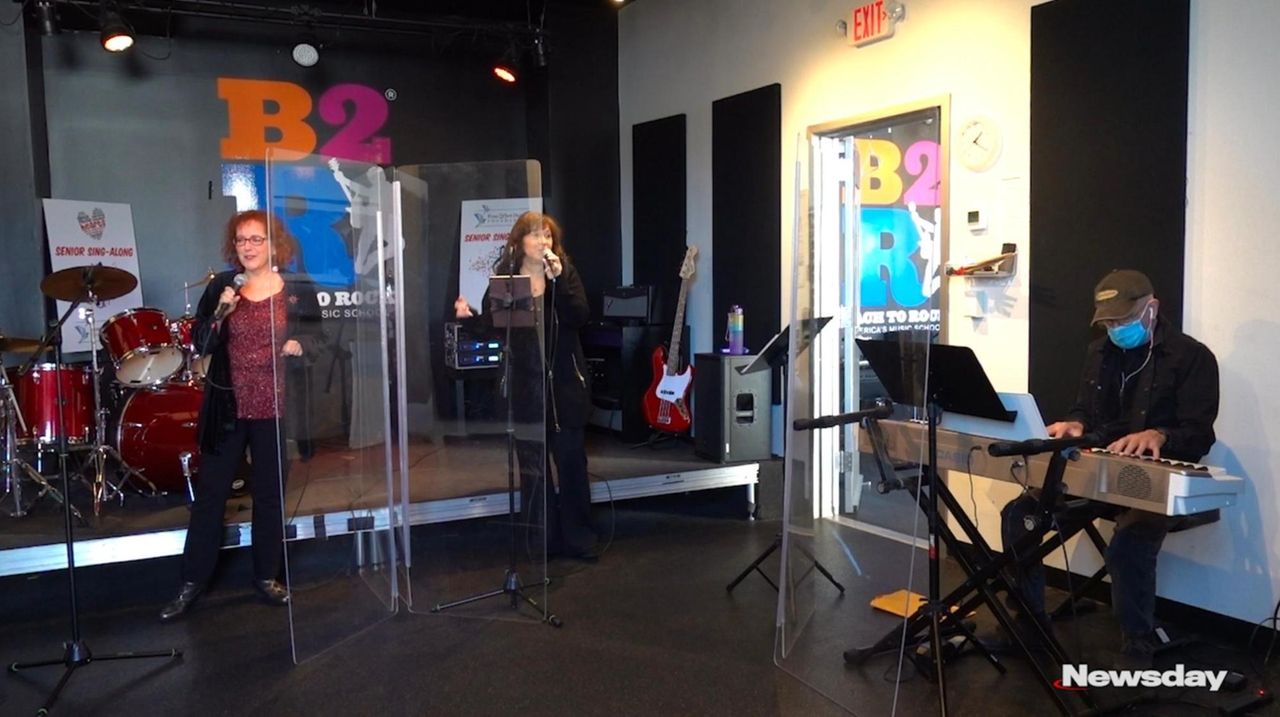 Singers Elise May and Elana Hayden have started doing a Facebook Sing-along one Sunday each month in which they invite people to sing along with them as they perform popular favorites.  Credit: Debbie Egan-Chin

Elise May is well aware of the healing powers of music. Several years ago, she attended one of her late father's performances for a group of intellectually disabled patients when he was part of the chorus at the Jewish Community Center in Plainview.

"Within that little concert, I saw a person who had early onset of Alzheimer’s," said May, who lives in Port Washington. "This woman didn’t communicate, didn’t ever do anything, and she got up and started swaying to the music. And then another gentleman started singing along and would not stop. It showed the magic of the arts to move people."

Now May want to cast her own magic on people who are feeling lonely and isolated during the coronavirus pandemic and could use some spirit lifting. In January, the onetime cabaret and music theater performer and her friend, singer Elana Hayden, started a Facebook Live Seniors Singalong from the Bach 2 Rock Music School in Port Washington. During the hourlong jam session, presented by the nonprofit HEARTS (Helping Enrich the ARTS of Port Washington) and the Peter and Jeri Dejana Foundation, they performed classic tunes from the 1940s through the '70s, exchanged witty banter and encouraged their roughly 300 viewers to join in the fun. Now their singalongs have become a regular thing on the third Sunday of each month at 2 p.m.

It was no coincidence that they served up "Cabaret" as their opening number. "We're inviting the people to be with us. And sing with us, That’s going to be how we start," said May, who serves on the board of HEARTS. (Guests can access lyrics beforehand at heartspw.org/seniorsingalong.html.) Though the singalongs are aimed primarily at seniors, all ages are welcome to attend, she added.

The invitation was gladly accepted by Stephanie Berger of Port Washington. "I thought it was incredible. It was a cold winter day and it brought light into the day and the community. It was engaging," said Berger, who gave her age as "pre-Medicare."

And yes, she did sing along while she was cleaning her kitchen. "Thankfully I was the only one who could hear," Berger joked. "Maybe for the next one I'll start dancing."

Keeping it simple and safe are the guidelines in creating the singalongs at Bach 2 Rock. The only performers in the studio are May and Hayden — who have a plastic wall between them — and an accompanist on keyboard.

For someone like Hayden, who's played with Billy Joel saxophonist Richie Cannata and Steely Dan's Jon Herington, the biggest challenge is performing for an invisible audience. "It’s a bizarre medium when you’re used to performing live, where you get that instant feedback," said Hayden, also director of Bach 2 Rock. "It was definitely different from what we’re used to, but I’ve done a lot of live streaming over the past year, so I was pretty comfortable with it and it went pretty smoothly."

May is hoping as the series progresses and as social distancing guidelines broaden that she can expand the production. "We’re looking at bringing in other singers or musicians as people get vaccinated," she said. "It doesn’t just have to be the two of us. We have lots of friends, people in this business who would love to participate."

And even as more venues open up, May said the singalongs will live on. "I still see streaming as a possibility for people who cannot physically get there," she said. "I think there are possibilities that should not end because we can physically gather because there are still some people who just can't."

WHEN 2 p.m. the third Sunday of each month

Should LeVar Burton be 'Jeopardy!' host? 237,000 say yes!
HBO: Osbourne to go on Maher show after 'The Talk' exit
Reports: Colton Underwood reality series in the works for Netflix
'The Talk' returns with a show 'unlike any other we've had before'
8:34
'The Buzz': Catching up with 'Cosby Show' star Malcolm-Jamal Warner
'Blue Bloods' shoots season finale on LI
Didn’t find what you were looking for?