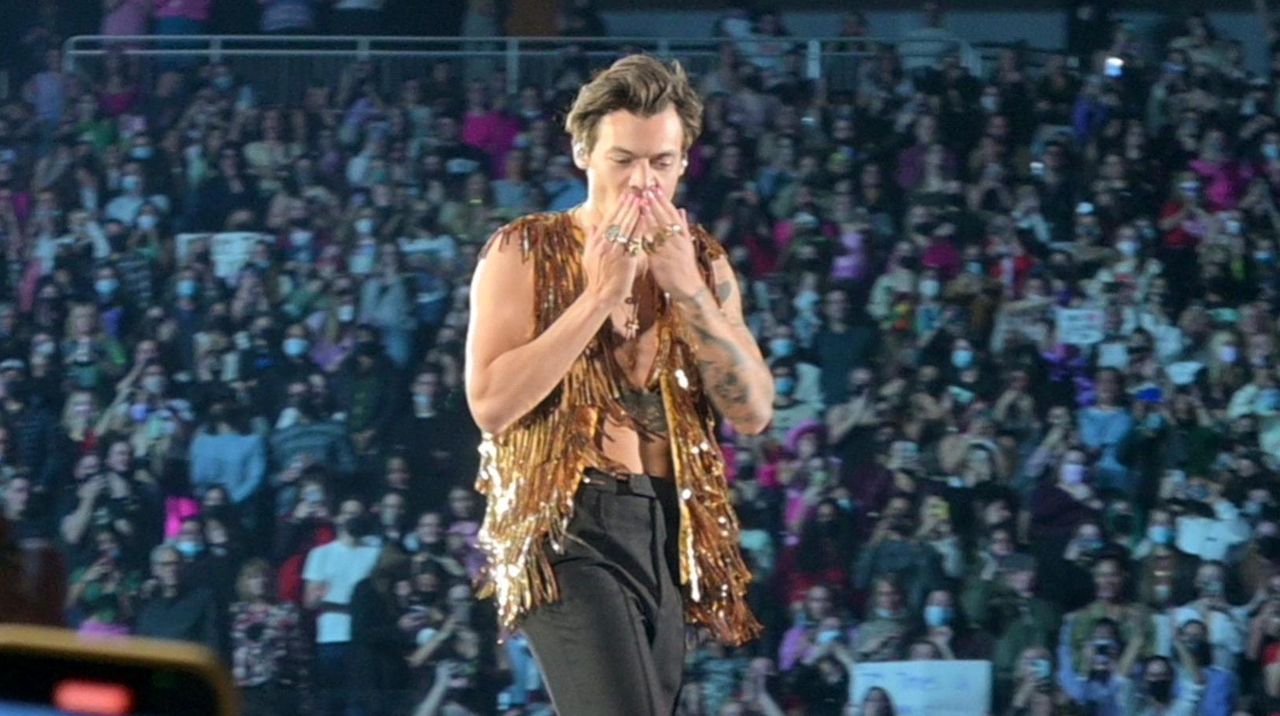 UBS Arena kicked off its concert career with one of the hottest pop stars in the world: Harry Styles, who played a sold-out show Sunday night at the Elmont venue in Belmont Park, the final stop of his "Love on Tour" dates.

"This is like a piece of history that I get to be a part of," said Ali Bebry, 21, of Bayville, who was seeing her sixth Styles show this year. "I think when I’m 80 people are going to talk about this arena the way they talk about Shea Stadium. I can tell my grandkids, ‘Grandma was at the first show at UBS Arena and it was Harry Styles!’ "

Styles’ fans are a dedicated bunch who call themselves "Harries." Most find each other on social media and come to his shows dressed up in special outfits.

"The attire is very campy. A lot of people dress up like him or in groovy attire such as ’70s bright color patterns," said Bebry, who wore a rust-colored silk jumpsuit with a light-up angel wings cape. "Each concert becomes a party. I enjoy the ritual aspect where you are, like, suiting up for an experience."

Styles, 27, hit the diamond-shaped stage in-the-round with sheer exuberance, which was matched by his youthful and predominantly female audience. The six-piece band kicked off the set with "Golden" from his multiplatinum sophomore album, "Fine Line."

"Welcome to the final night of ‘Love on Tour,’ " said Styles, wearing a gold fringe vest on his bare but tattooed chest. "It’s also an honor to be the very first show in this building."

Like 'N Sync’s Justin Timberlake before him, it’s clear that the former One Direction member, 27, has risen above his boy band roots to mature into an A-list entertainer who can do more than just dance and sing live (that’s right, no lip-syncing here): Styles can, more importantly, connect with his crowd. He performed such songs as "Adore You" and "Only Angel" rotating around the stage making sure to evenly distribute his attention to all sides of the stage and its extended catwalks.

"We have one job this evening to entertain you wonderful people. I promise you we will give you our absolute very best," Styles said to the crowd. "You have one job, too — to have as much fun as you possibly can. Please feel free to do whatever you want to do and be whoever you want to be in this room tonight."

During his song "Treat People With Kindness," Styles displayed a rainbow LGBTQ flag that was tossed onstage showcasing his openness to his fans from all walks of life. But it was his charm that warmed up the room on ballads "She" and "Cherry," where the fans sang along to every word, or jumped about to the up-tempo One Direction classic, "What Makes You Beautiful."

After chants of "HARRY! HARRY! HARRY!" the British icon responded with an encore of hit "Sign of the Times"; the unreleased fan favorite, "Medicine" and chart topper "Watermelon Sugar." For the final number, Styles rocked out to the sounds of "Kiwi" from his self-titled 2017 debut album. Consider the arena officially christened.

The new billion-dollar facility, named after the Swiss bank and home of the Islanders, was clearly designed for comfort. There’s plenty of space for visitors to move about, as well as a variety of food vendors and bars. However, the arena's most impressive element is its seating structure. Although the building holds 19,000, there really are no nosebleed seats because of the shape in which each section is layered — not to mention a crisp sound system in a room that feels intimate despite being a hockey arena.