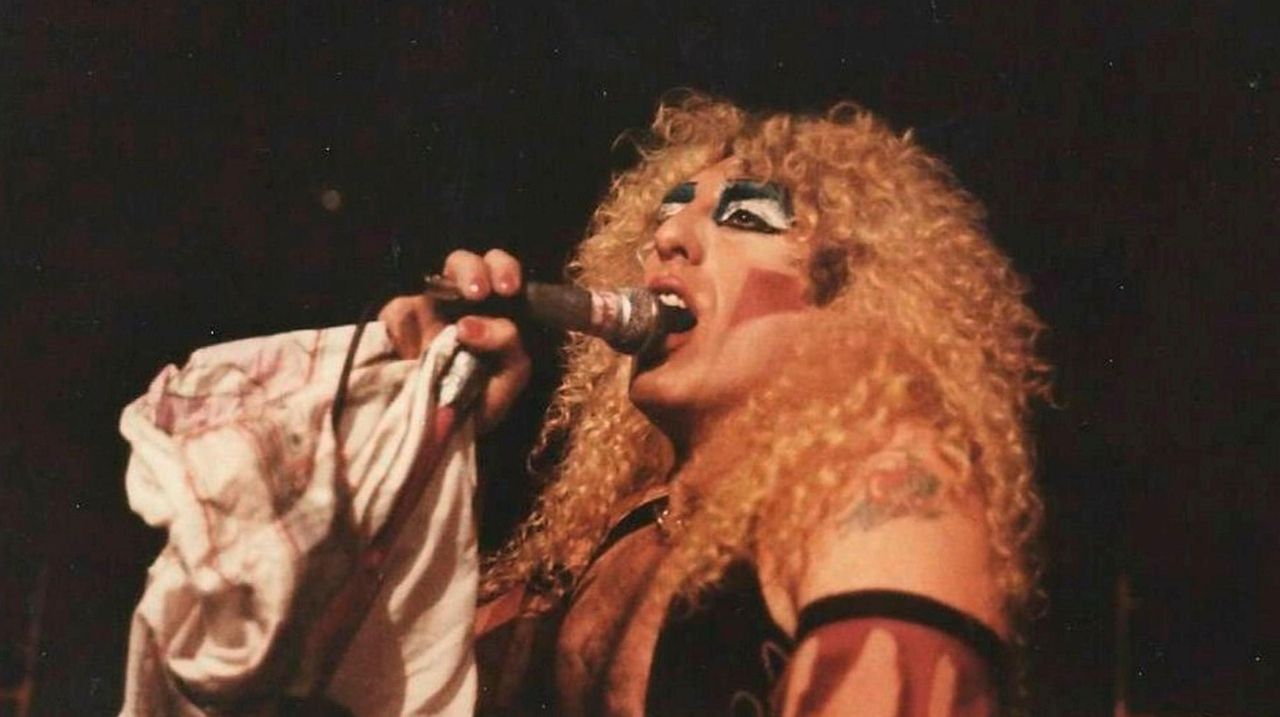 Twisted Sister lead singer Dee Snider, who grew up in Baldwin, speaks via Zoom about the impact of heavy metal in the suburbs and the old rock club scene on Long Island. Credit: Newsday / David J. Criblez; Dianne Boothe

For many headbangers on Long Island, hard rock and heavy metal isn’t just music, it’s a lifestyle. "Once it gets in your blood, it’s like a drug," says singer Paul Terror, 55, of East Meadow. "It’s so addicting that it becomes part of you."

This aggressive style of music dominated the clubs and bars throughout Nassau and Suffolk from the late '70s to the mid ‘90s. Venues like Hammerheads in Levittown and West Islip, Speaks in Island Park, Cheers in Deer Park and the Mad Hatter in Stony Brook were the places to hit. They were crowded all week long not just on Fridays and Saturdays.

"We worked 5-6 days a week in different Long Island clubs. There was no stopping," says Zebra singer/guitarist Randy Jackson, who currently resides in Centereach. "Sometimes we would play the same club three times in the same week."

There was an electricity in the crowds at each venue that resonated throughout Long Island.

"It was very volatile. There was this sense that things could erupt and did erupt at any moment," says Dee Snider, lead singer of Twisted Sister, who grew up in Baldwin. "People were very packed together - a lot of angst, frustration and anger. I often was a trigger point because of the way we looked and acted. We would try to invoke intense reactions."

Twisted Sister was the biggest band on the Long Island club scene where they developed a massive following.

"We satisfied that arena crowd which existed in the hundreds of thousands on Long Island," says Twisted Sister guitarist Jay Jay French. "This is an era that will never happen again...the coincidence of the drinking age being 18 and the rise of arena rock."

In the late ‘70s and early ‘80s, the drinking age was 18. As a result, the those drawn to these clubs were in their late teens or even younger as some were crafty at getting in.

"I started going to clubs at age 16," admits Evan Wald, 59, who grew up in Island Park and currently lives in Garden City. "Everybody knew a guy who sold driver’s permits with the stamp on it and you could fill in the rest. Back then it was accepted as proof. The stamp was the validation."

Guitarist Steve Vai was even underage when he was performing in his early band Rage and living in Carle Place.

"I was gigging in clubs at age 16 covering Led Zeppelin, KISS, Aerosmith, Alice Cooper and Black Sabbath songs," says Vai. "Wherever we would play, 150-200 kids would show up and cause the most incredible trouble. We used to perform at places like the Beef Barn restaurant at Roosevelt Field. We'd kick into ‘Born to Be Wild’ and they’d go insane dismantling the place."

Looking back, Vai has fond memories from that time.

"Rage was my favorite band I was ever in because we were young and innocent yet ambitious and wild," says Vai. "We were like a roving youth gang. There was nothing cooler than being in a rock band in high school."

The drinking age was raised from age 18 to 19 in 1982 then from 19 to 21 in 1985. This created a speed bump in the hard rock/heavy metal scene on Long Island but it forged forward with newer clubs like Sparks in Deer Park, Spit in Levittown and L’Amour Far East in Commack. But, the biggest was Sundance in Bay Shore.

"Once Sundance showed up, that changed the game," says WBAB DJ Keith Fingers, who served as the club’s house jock. "The place was always packed. It was like putting CBGB and Speaks together."

"Guns N’Roses played Sundance right before they exploded. Within a month, they were taking over the music world," says Steven J. Messina, 52, of Commack, who was in the front row for the show. "Everyone who was there was in the know and ahead of everybody else. Tickets were only $14."

The man behind these legendary bookings was Frank Cariola, who owned and operated Sundance in the '80s. He then ran the Roxy Music Hall in Huntington in the early to mid-90s, where Marilyn Manson and Korn headlined.

"I got the pick of the crop," says Cariola, 91, of Dix Hills. "I kept abreast of what was hot on the scene. Once I developed a good reputation, the agents started calling me."

One of the legendary elements of Sundance was the mosh pit on the floor where people would body slam feverishly to the intense music coming from the stage.

"It was almost like a sporting event. Moshing was a great way to let out aggression," says Patrick Sheil, 55, of Holtsville. "I never broke a bone but I’ve twisted some ankles or walked out with a bloody lip. It’s the nature of the beast."

Perhaps the wildest scenario that occurred was when the "Wall of Death" was introduced during Exodus’ show.

"You divide the crowd into two sides - one to the left, the other to the right. The lead singer would count to three and everybody charged at each other," says Sheil. "There were no fists involved. We’d just bang into each other like in football."

Sundance gained a reputation for breaking new bands like One Step Beyond, who spent over a decade on the Long Island metal scene developing a strong following and standing out of the pack.

"We were an interracial and mixed gender band," says guitarist Bob Valderrama, 51, of Bayville. "We looked odd right out the gate and didn’t fit in, but the songs were solid."

With tunes like "Null & Void," "Bleeding Diary" and "Wasted," the crowd was able to get beyond their unique make-up.

"People were curious. They found us interesting," says bassist Urith Myree, 52, originally from Port Washington and Hempstead. "I don’t think anyone had seen anything like us, which set us apart."

One Long Island band that broke through early in its career was Danger Danger, whose line-up debuted at February’s in Elmont.

"Our goal was not to play covers, but be known all over the world for our originals," says Danger Danger drummer Steve West of Woodbury. "We are hometown guys who take pride in where we come from. Long Island is more than just Billy Joel."

All of the Long Island metalheads collectively listened to WBAB’s "Fingers Metal Shop," a weekend radio program on 102.3 FM that spotlighted the harder edged material which was too rough for afternoon drive.

"Everybody sees heavy metal differently. Some see it as rebellious, but there was a sense of unity," says Gail Flug, a journalist from Deer Park who did the "Scrap Metal" news portion of FMS. "This was our own little bubble and it was very special."

But, it’s the music that bonds all the fans and bands together keeping the flame of hard rock and heavy metal lit on Long Island.

"Each song is a timestamp in our life," says Fingers. "When we listen to them they bring us to a place. People want to recapture their youth even if it’s just for a couple of moments."

Perhaps the most interactive part of the hard rock and heavy metal community was the in-store appearances at independent music stores like Slipped Disc Records in Valley Stream.

“The in-stores put us on the map,” says owner Mike Schutzman, 64, of Oceanside. “We hosted bands like Metallica, Motörhead, Dio, Megadeth, Sepultura, Fight, W.A.S.P. and Exodus.”

When Slayer made its New York live debut on Halloween 1984 at the Rio Theatre in Valley Stream, the show was preceded by an in-store appearance across the street at Slipped Disc in the afternoon.

“They came from California in a rental truck with the entire band, three roadies and all their gear,” recalls Schutzman. “The band called my house at 1 a.m. saying, ‘We have no place to stay and we have all this equipment that needs to be stored.’ ”

Schutzman, who lived at home with his parents in Elmont at the time, got out of bed and met Slayer down at the store to lock up their gear inside. Not knowing what to do and feeling responsible, he proceeded to put the band up at his parents’ place.

“They slept all over the house - on the floor, the basement, the extra bedroom. It was crazy,” says Schutzman. “The next morning I had to leave and open the store, but I felt weird leaving Slayer in the house with my parents. When I came downstairs, the band was sitting around the kitchen table as my mother was feeding them bacon, eggs and pancakes.” - DAVID J. CRIBLEZ

Fans would show their dedication by getting the back of their denim jackets painted with an album cover or logo of their favorite band. Former Huntington/Dix Hills resident Derek Cervoni painted over 100 jackets at $20 a pop at Half Hollow Hills High School East from 1979-1980.

“Back in the day, we didn’t have Facebook where you could post your favorite stuff,” says Cervoni, 59. “This way people knew what you were into. If you saw someone wearing a jacket with an image of a band you liked, you’d start talking to them.”

Cervoni would draw an outline with a white pencil then use fabric paint to finalize the design, which would soak into the grooves of the denim.

“I did a lot of hard rock and heavy metal bands like Black Sabbath, Iron Maiden, Blue Oyster Cult, Van Halen and Aerosmith,” he says. “This music was our escape. We didn’t have the internet or cell phones. Most of us didn’t even have cable TV yet.” - DAVID J. CRIBLEZ